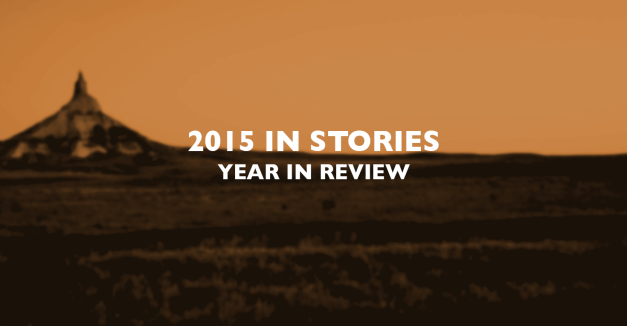 Hear Nebraska’s editorial team pushed its storytelling boundaries further this year than ever before, in terms of both physical distance and personal comfort zone.

For proof, look to the Good Living Tour. In June, one month prior to bringing 27 bands (and one DJ) to greater “Good Life,” our staff embarked on a 10-day reporting road trip across the state. Working out of hotels, cars, coffee-shops and more cars, our team uncovered music-related stories that bolster Nebraska’s claim as a cultural destination.

But that’s not all. In our constant quest to cover all things Nebraska music, we extended long-overdue arms to some of our genre and geographic blind spots: hardcore, punk and hip-hop genres, as well as western Nebraska as a whole. The battle to cover all corners of an entire state’s music scene is constant for our limited staff. But the lessons learned, and feedback gained, laid the groundwork to further expand our scope in 2016.

All the while, our staff and hard-working, dedicated interns and contributors continued to produce thoughtful concert reviews, in-depth interviews and quirky scene tales.

Read on and follow the links to revisit our 15 favorite stories of 2015.

story by Jacob Zlomke | photos by Will Stott

Luke Polipnick and Josh Norton’s “Hideous Monolith: Cthulhu Interpretations” reframes a cult-classic horror story through visual and music arts. Read how the vinyl project asks its audience to engage with distinct pieces to form a full narrative and plays on how we create, consume and interpret art.

As it is on his acclaimed 2014 album Benji, death and aging lingered at the forefront of Mark Kozelek’s Jan 26 Vega performance. Read on for our review of the intimate, seated show, which also featured some choice audience banter:

The acclaimed and beloved punk band Sleater-Kinney hit a sweet spot of musicianship, bandhood and cultural resonance at its Feb. 13 Slowdown show. See our coverage of the sold-out show here.

You could fill a book with the SXSW criticisms and objects of amazement that don’t fit into set-by-set reviews. Here’s some stray observations and feature photographs from our week at the Austin music festival.

With the release of Simon Joyner’s 13th album, “Grass, Branch and Bone” March 31 on Woodsist Records, we packaged a feature interview and album review podcast. First, we talked to Joyner about chasing impossible greatness and the artistic endgame for the Omahan with an international cult following. Then, our podcasters discuss the warmth and stunning lyricism of what could be Joyner’s finest album to date.

In one of our most controversial stories to date, we spoke a little with Bent Life’s Brock Stephens about his Lincoln band’s new album on esteemed hardcore label Bridge 9, and a lot about Hear Nebraska’s coverage of punk and hardcore.

Sam Martin played his first Nebraska show of 2015 on April 23 at O’Leaver’s. We caught up with Martin, who’s recently lived in Canada, to discuss praises and misgivings about his new solo album, his documentary scoring and the time Capgun Coup played to three people in Minden, Nebraska.

The onstage persona of Saint Christopher performs a debaucherous and challenging form of western punk: snarling and spitting in faces. Christopher Webster, the newly sober artist behind it, is a road-wearied man, constantly struggling to make art he considers pure. Read our feature story here, as Webster released his newest LP May 16 at the Zoo Bar. We previewed the album with its first track, “Wishing, Waiting, Hoping and Dying.”

Burger Records, a notable California-based DIY label, sells tapes out of its only cassette vending machine in the world — in the downtown Omaha’s Urban Outfitters. The relationship between Omaha’s store and the label has since spawned a handful of shows and national music connections. Read on for more.

30 Years of Nebraska Music from the Blogger Who Was There: An Interview with Tim McMahan

The Things We Do For Love: Lucas Kellison’s ‘Psychotic Footprint’ Album

Read the story of Bizarro Love, the moody and intoxicating album that should be Lucas Kellison’s crowning achievement. Instead, it mysteriously encapsulates five years of toiling in the wilderness of debt, weariness and compromise. This article previewed the Lincoln funk musician and bandleader’s June 20 release show at Duffy’s Tavern.

Read Zlomke’s thoughtful review of Conor Oberst’s June 19 tour stop at Vega. Oberst showed up as an old pro: a consummate performer and master set-list-crafter. Backed by The Felice Brothers, the Bright Eyes songwriter rolled through 15 years of material, apparently unburdened by home-state expectations or baggage.

Nick Rich: From Addiction to Benediction

story and photos by Andrew Stellmon

Former professional drummer Nick Rich followed the hard-touring, rockstar lifestyle down a destructive path to addiction. After hitting rock bottom, he left behind fame and money for Ogallala’s New Hope Church, drawing on his tribulations and musical talents for community good.

Norden Dance Hall lies at the center of the rural Niobrara Valley community, an 80-year-old living ode to family, culture and tradition. A Saturday night visit in June — as part of our Good Living Tour storytelling project — connects past and present, displaying its importance to generations. Of note: this story was our most-read of 2015.

The New World: A Stately Home for Film and Music in Kearney

From marquee to lobby to balcony, Kearney’s World Theatre is a visage of reinvented classical taste. But then, there’s the elbow grease, the volunteers, the eclectic musical acts and the lifelong stories that make it an accessible and lasting part of Kearney’s history.

A Letter to Young People in Greater Nebraska | essay by Andrew Norman | The Good Living Tour brought live, original music to nine Nebraska towns during the month of July. To our executive director, it represents a launching pad to grow and spread a vibrant music scene to all corners of the state. Read his letter for the young people of Greater Nebraska.

Femme Fest: The Teenage Experience | essay by Ryleigh Welsh | OGR’s Sassafrass was invited to play a set at the inaugural Benson First Friday Femme Fest. Welsh, a member of Sassafrass, spent the remainder of the evening soaking in the experience, including the dripping Sweatshop, a slice at the Pizza Shoppe Collective and the sounds from neighboring Jake’s Block Party — everywhere in which she was allowed to set foot. The following is an essay penned by Welsh, examining the festival through the eyes of a 15-year-old aspiring musician.

How Reptar Thrives and Why We Make Friends | story by Jacob Zlomke | Between a frontman’s move to Omaha and a bumpy show on Friday night, Reptar finds a place to belong.

Clark & Company: Three’s Harmony | story by Andrew Stellmon | Siblings Sophie, Cooper and Simon Clark have been playing music together since age eight, and it shows in effortless playing, multiple award nominations and a prolific recording output as Clark & Company. Constantly on the path of intentional redevelopment, they releases career-snapshot EP ‘Roots’ in November. Read on for our Sunday conversation with the triplets at their West Omaha home studio.

Kamasi Washington at Slowdown: Review & photos | review by Kekeli Dawes | photos by Chris Dinan | At his September Slowdown concert, Jazz phenom Kamasi Washington, along with band Next Step, displayed elite musicianship, and an invaluable clinic for any musicians and spectators alike. Equally important, it was a jazz showcase on the venue’s main stage, led by the man labeled the savior of the genre. Read on for a review and photos of Washington’s performance.