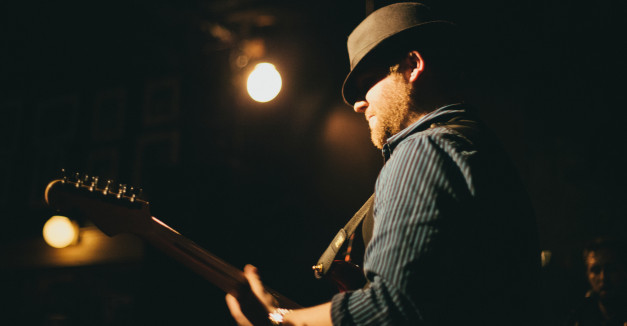 Around the time Lucas Kellison was cutting the ribbon on his Lincoln recording studio in 2009, he received a call from his tearful mother.

She’d just received a letter from Lucas — the kind your inspiration-hungry teacher has you write yourself in the eighth grade, and then mails ten years later.

And when you think about it, such letters — if they ever even arrive — might only incite a moment of disappointment, showing the disconnect between a 14-year-old’s dreams and a 24-year-old’s reality.

But Kellison’s didn’t. And that’s why his mom was crying. In his own handwriting, he declared his destiny for a career in music and studio ownership.

If you look back at the interviews the Lincoln funk musician has given through the years, the phrase “self-actualization” reliably appears. He’s spent most of his life knowing exactly what he wants and appears uncommonly aware of how he has and hasn’t attained it so far.

But when he offers the letter anecdote earlier this month at Lincoln’s south Mill coffee shop, it’s not as evidence of his current success; it’s a footnote in the flow of a story about suffering and naivety. This year, Kellison has stepped out of the woods of massive debt, creative frustration and a strained personal life. His five-year-old Lincoln studio, SadSon, which he co-founded with TJ Saddler, was paid off in December.

It’s a bit like he’s seeing for the world for the first time, but clarity returns slowly.

“When you come on the other side of something like that it’s not as glorious as you’d think,” he says. “It’s only now I’m starting to feel the glory. But I’ve really had to rewire this year and condition myself to be happy. Because I am so post-traumatic.”

During the interview, Kellison is nursing an orange soda and he’s spent the day with his two-year-old son. He has a bit more freedom this time of year, on summer break from his job as an English teacher.

“Redemption” is probably too strong, too biblical a word for Kellison’s emotional machinations this year. Because the SadSon story isn’t really one of betrayal, triumph, penitence and piety. Eventually, maybe; Kellison talks about getting back in touch with “Lucas the Idealist.”

It’s out Saturday at Duffy’s Tavern. RSVP to the release show here.

It’s a record Kellison neither clearly understands conceptually nor remembers making. “Catharsis” is the most definitive word he musters. Bizarro Love was mostly conceived during the darkest six months of his life, while student-teaching full-time for no pay, working full-time at the studio (with every dime going back to the bank), with his only income from gigs.

“[Bizarro Love] is me sneaking into my own studio. I think subconsciously I was thinking, ‘I have to document this era because it’ll never happen again.’”

In his press statement for the record, Kellison calls it a “psychotic footprint.” Put it on, though, and you might call it the recorded version of Lucas Kellison for which you’ve been waiting five years.

It’s electric and full-bore unlike his acoustic Undisco Wood album (which Kellison has always acknowledged was an appealing sidecar to his full-band ambitions.) It sits down on the grooves the way you’d hope, if you know his early records, Rise or New Muse. It’s anchored around a murky mood, the way the sprawling, ill-fated and ultimately scrapped The Young Rebel’s Art never was.

“I think of this as my first record,” he says, after a moment of thought about where it falls in a complicated discography, obscured by the shuffling of band monikers and lineups.

“Dear Lucas, you’ll get what you always wanted. But not when you think. And when you do, you might not be able to enjoy it until years later. Good luck.”

In 2010, George Clinton and Parliament-Funkadelic, the hegemonic, famous, forever-pioneers of psychedelic funk visited SadSon, something that seemed utterly unlikely at the time. But the relationship and recording session of that Thanksgiving weekend would stick with Kellison’s name and albums for the next half-decade.

In fact, it tags Bizarro Love. The Kellison and P-Funk duet, “Take It Make It,” opens the album. That track has been released for years, but leading off the album’s other ten songs, it’s a big, bad, swaggering warning of what’s to come.

“I always felt like P-Funk was a band that really explored darkness,” Kellison says. “Yes, a lot of it’s tongue in cheek. Yes, there are antics. But it’s not supposed to be funny. It’s full-on irony. ‘Maggot Brain’ is not a funny song. The only way they could escape what they were experiencing was to blast it off into outer space.”

The track’s most notable early moment, before it kicks into high gear, is a curiosity. In his bigger-than-life baritone growl, Clinton gruffly mutters: “Baby demons are not funky. They gross me out.”

In writing that talking section with Clinton, Kellison remembers the P-Funk frontman’s hesitance to “collaborate with the demons.”

“George doesn’t like to talk about demons,” Kellison says. “I was saying, ‘It’s gotta be funky. I’m going through some shit.’”

When Clinton mentioned the demons anyway in the flurry of the recording, Kellison felt he had to keep it.

Kellison says he’d be surprised if P-Funk didn’t come by SadSon when they’re in Lincoln next week Tuesday for their show at The Bourbon. Kellison and Josh Hoyer and the Shadowboxers are opening that show. RSVP here.

Front-to-back, Bizarro Love sounds like an hour-long loss of innocence: a prolonged disenchantment with personal, political and romantic dreams. Whether the songs chart casualties of war and love (“War Games”), pollution and ruination (“Nebraska Blue”) or relationship deterioration (“Behaviors”), every story rings out as if played from the middle of a maze: How did we even get here?

That’s one way the title swirls, like a disorienting sign-post, above the album. There’s a romantic, fatalistic love to every track, but there’s nothing particularly natural-feeling about what that love does when it’s reverberating at full-strength. Same goes for the real-life story. Were it not for all-consuming love of music, Kellison’s last five years would’ve been easier.

“I remember being $15,000 in debt on Christmas Eve,” Kellison says, and there’s still some disbelief in his voice. The one-sentence anecdote is full of meaning, though entirely displaced. Like a scene picked from a fable with no clear lesson. The young business owner put the young rebel in artistic jail, and it’s still unresolved with whom time will side. Maybe both.

“It changes you,” Kellison says. “I can’t tell you how many times I’ve contemplated bankruptcy. My role as a husband, father, a lot of that was very compromised. It was five years of living like a maniac and not having any kind of purity.”

The future, then, is fitting, as most things reconciliatory are oddly ill-fitting. His work this year at an in-the-black SadSon has paid for an impending trip to Puerto Rico, a victory he quietly laughs that no one really wants. For his family, quality time is all that matters.

Musically, the last two years have landed him with the core of his band, guitarist and bassist Dan Beard and Danny Firestone, two musicians he says have changed his ability to collaborate for the better.

“They’re monster players,” he says. “I’m just an introvert. I don’t like the vulnerability. But it’s also necessary for growth.”

“Lucas Kellison” is now a seven-piece with the introduction of horn players, saxophonist Patrick Brown and trumpeter Jesse McBee. Gone is anxiety about ensemble names. His own will do, he says, at the same time as he acknowledges it’s absolutely a “conglomeration” in which every player deserves credit.

And it won’t be another four years before he puts out a record that feels central to him, nor is another likely to die on the vine. The uplifting and analog yin to Bizarro Love’s dark and digital yang is due out in September. It’ll feature P-Funk, as well.

“I’m really starting to like music again,” Kellison says. “When you experience something like that, it churns all the bullshit out of you. You don’t have time to have a dishonest conversation.”