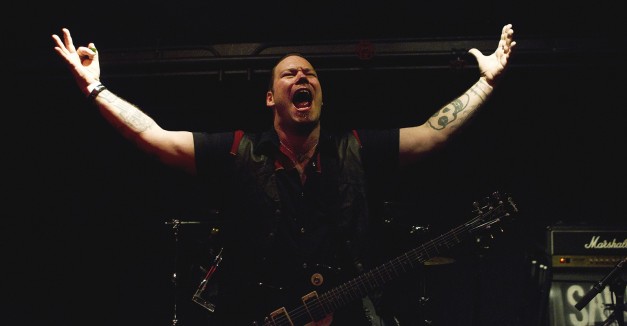 Christopher Webster has sacrificed a lot over the years in the name of integrity.

The way the Nebraska native talks about how his music fits in any context seems to toe the line between stark self-awareness and some form of holier-than-thou preachiness — that of his on-stage persona, Saint Christopher. As he speaks over the phone from his girlfriend’s house just outside of St. Louis, he laments that independent music has deteriorated, and that some bands dilute their music for a paycheck.

“Art and music is meant to stir some emotions, and sometimes they’re not fucking pleasant emotions,” Webster says. “The things that I write are not for popular consumption. You’re not gonna be well known. You’re not gonna make a bunch of money. But that’s the price you pay for making legitimate music.”

It practically drips with the implication that he has taken the high road through what has been Hell and Creation since he started touring and playing in bands more than 20 years ago. He plays a brash, maybe offensive brand of rock, riddled with blistering slurs and enough f-bombs to fill a Quentin Tarantino flick.

And yet, the opposite is true. Webster is so convincingly earnest and self-examined that, as he constantly pauses to reassure me that he doesn’t want praise or sympathy or undue recognition, I believe him. When he talks about being tired, hungry and broke, he’s simply recounting his life on the road.

Christopher Webster, aka Saint Christopher, plays the official release of his third full-length album Let This Kill Me: A Nebraska Tradition of Murder and Alcoholism, Saturday night at the Zoo Bar. Get more information here.

Webster’s life has been anything but a joyride. As a kid, he felt like an outcast, rejecting popular music and sports culture in favor of Dead Kennedys and Minor Threat. He decried what he refers to as “bubblegum punk” and “nauseating fluff,” drowning them out in his speed metal band MF Saints (or Motherfucking Saints), which he started with his brother Ben.

When that became monotonous, Webster struck out on his own in 2008 as Saint Christopher, playing a gritty combination of electrified country western folk and snarling punk rock. He has traveled to Montana, Texas, Kansas and other mid-country states, making enough money to get to the next show and drinking away his loneliness and performance anxiety.

“Night after night of going to fucking empty places in the cold and the hot,” Webster describes it. “Not getting paid, not getting fed, sleeping in your car. It was definitely a coping mechanism, getting wasted.”

He recounts one episode where, on the torturous drive from New Orleans to Kansas City, he was drinking heavily and doing speed just to stay awake. Hard to blame him, then, when he chastises those who view touring as a glamorous, party-filled adventure.

It’s not that he has given up music fame to spit punk rock vitriol in people’s faces at shows. He does it this way because his alternative is not playing music at all.

All of this is nearly indigestible in one sitting. His Facebook page often reads as though bled from a rabid conspiracy theorist. Chris against the world.

But as we talk on the phone, he seems modest and mostly relaxed, if not a little excited. He had just received the first copies of his new album, and he’s hand-cutting the packaging with his girlfriend and bassist Sydney Schlemer. He says that it adds a level of intimacy to purchasing it that one can’t get when they go to Wal-Mart to pick up a record.

“Back in the day, to find a Black Flag album or a Goonies album, you had to do some work to get it,” Webster says.

The album is an apt reflection of its maker, both in sound and the story of its crafting. Webster rolls his angsty punk streak into songs both rollicking and irreverent. “And The Crowd Goes Wild” is romping slam of commercialism, football and those Webster sees as complicit in their prominence.

He pulls up on the throttle a bit on songs like “Wishing, Waiting, Hoping, and Dying,” injecting a tinge of Cash-esque bluesy folk in a eulogy for his deceased mother. Webster wrote the song in July 2014 on the day his mother passed, standing alone in the elevator after her final bedside moments.

“We recorded this song in studio at about 4 a.m.” Webster says. He refers to his marathon recording sessions in the Texas basement-studio of Reverend Johnson, a close friend from his travels and guitarist of Texas band Whiskey Dick.

“After he heard me play this song live in Grand Island,” Webster says, “he told me he wanted to record my album.”

In January, he toured his way up to Great Falls, Mont., where he recorded drum and guitar tracks at the studio of his friend Mike Chasse. They cut roughly half of the album before heading down to Texas with Schlemer to finish the rest.

Webster admits to possessing only adequate guitar and vocal skills, making up for it in confidence in his songwriting ability. For that reason, he presented the songs he wrote to his session players and let their skills guide the rest of the way.

“Honest to God, I don’t even consider myself a musician. I’m mediocre at best as a musician,” Webster says. “But i’ve got alot of talented people around me that can make it come to life.”

In the end, he says that what would have cost him thousands of dollars was made possible thanks to people he considers closer than blood relatives, his “road family.”

“There’s a lot of love put into it,” Webster says. “Guys went into it knowing they weren’t gonna make a lot of money on it or [enjoy] commercial success, but they went to a lot of trouble and a lot of effort just to make this all come alive. I’m pretty proud of that fact.”

And count Schlemer among those integral to the record’s existence. The two first met at The Crackfox in St. Louis, when Schlemer was passing out handbills for her band’s upcoming show. She explains that she first saw him perform there without a backing band, and was so taken that she was late for a date.

“When I walked in and I see this man up there, and he’s by himself, but he’s captivating an audience,” Schlemer says. “Spitting and screaming. I was like ‘oh my.’”

The next few times through, Schlemer made it a point to attend his shows, even if he was drunk and sloppy for most of them. When they finally hit it off, it was partially because she wedged her band, Candy Coated Evil, onto the bill.

“That night was when we got to hang out for a long period of time and we’ve been inseparable ever since,” Schlemer says.

Webster is five-months sober, having dealt with anxiety throughout the recording process. Schlemer was the anchor that kept him in place. Prior to recording, she accompanied him as merch handler in name, but also as his sponsor. She’ll tour with him on this coming venture, playing bass in his three-piece band. But she’ll also be keeping him in line.

“I think it’s gonna be interesting, but honestly I don’t know,” Webster says of performing with her. “We’ve already been through so much shit together. This could be the easier part.”

As self-aware as Webster remains with regard to his sobriety, he still allows himself to get publicly carried away. The press material for Let This Kill Me, also posted on his Facebook, reads like a manic, paranoid stream of consciousness.

He revisits the full-time youth advocacy position he held for Lincoln Public Schools, counseling addicts and homeless while wearing the remnants “of the sweat and sin of the road.” He recounts how he was fed up with the “dog and pony show” system of “economic exploitation,” which drove him to the road full-time.

It’s not that there isn’t a kernel of truth to find buried deep in these rants. It’s that, simply put, it reads like he’s on a bender. But maybe this is a high of a different kind. He confesses that playing music sober has been more invigorating and uplifting than any drug experience.

At this point, the meaning of title of the new record (at least the first part) should be clear. It originates from a Charles Bukowski quote: “My dear, find what you love and let it kill you. Let it drain you of your all. Let it cling onto your back and weigh you down into eventual nothingness. Let it kill you and let it devour your remains. For all things will kill you, both slowly and fastly, but it’s much better to be killed by a lover.”

Saint Christopher’s lover is the road. He seeks only to remain as pure as possible, whatever that can mean for a tireless interstate warrior. To let it all — touring, drugs, alcohol, whatever – pound him down into a fine powder if it means he creates for himself and those few who align with him.