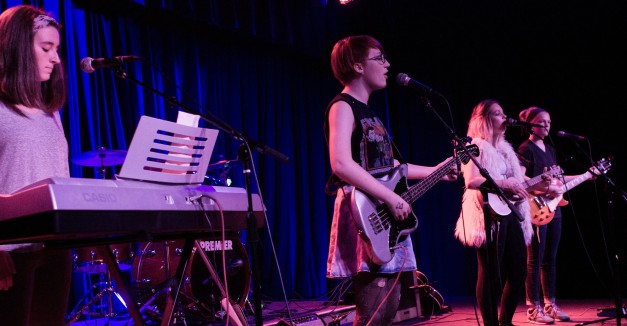 [Editor’s note: OGR’s Sassafrass was invited to play a set at the inaugural Benson First Friday Femme Fest. Ryleigh Welsh, a member of Sassafrass, spent the remainder of the evening soaking in the experience, including the dripping Sweatshop, a slice at the Pizza Shoppe Collective and the sounds from neighboring Jake’s Block Party — everywhere in which she was allowed to set foot. The following is an essay penned by Welsh, examining the festival through the eyes of a 15-year-old aspiring musician.]

My band, Sassafras, formed during this year’s Omaha Girls Rock camp in August. When Becky Lowry saw us perform our song at the OGR Showcase, she asked us to play Femme Fest on the spot. The song we wrote is about female empowerment and the new generation of kick-ass feminists. We are all 15 or younger. We are starting out young because we are not afraid. For the first couple rehearsals, I brought in songs I wrote so we didn’t just have the one song we played at the OGR show. We started playing and they turned into real songs, so we did a three song set after All Young Girls Are Machine Guns at the opening ceremony at the Waiting Room.

I love AYGAMG, obviously. My mom is in it. I know all the songs and sing them in the shower. I love Becky and I know everyone in the band pretty well. Becky is a powerful lady and her voice is amazing. My bandmates, my friends and I were all dancing to their set and singing along. Then we joined AYGAMG onstage for a cover of Icky Blossoms’ “Babes”, which was super fun. I was dancing on stage and I think I embarrassed the other girls, but whatever. We kind of freaked out when the song ended because we were like, “Oh my god, we have to play songs now!” We started playing and I got lost in the music. I was in the moment. It all went really fast. After the set, a lot of people I knew and a lot of people I did not know said “Good Job.” I got a lot of “Keep on rocking! You’re going to grow up and be a great musician”, but I was like, I’m a pretty good musician now. Why do I have to grow up to be a good musician? Anyway. 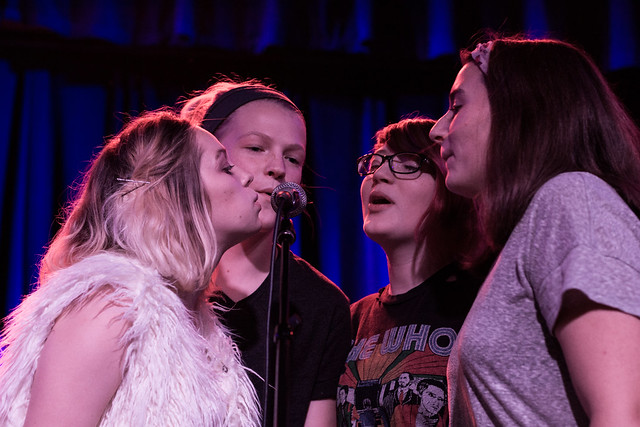 Clark & Co. was the next band to play. All the bandmates had intricate parts. The bassist was all over the place with that stand up bass, but he knew exactly what he was doing and he made it look easy.

Then we went down to Pizza Shoppe. On the way, we saw High Up at Jake’s Block Party. I have a huge crush on Orenda so I was like, sweet, I get to (barely) see her play the trumpet and I’m also scared of her, in a good way. She is so powerful.

We saw one song by Molly & The Dustbunnies at Pizza Shoppe. Molly is so tiny and there was another tiny girl playing keys (my mom says it was Mike Saklar’s daughter, like I’m supposed to know who that is) and they were both really good. Molly mentioned she was on bandcamp so I’ll look up her stuff.

I ate pizza with my friends and watched Mary Ruth McLeay’s entire set. Mary was passionate about her work and very animated while she sang. I could see the emotions on her face. I liked her set. She had this bounce to her voice that was really cool and made her relatable.

Then we had more pizza and watched half of the Miniature Horse set. THAT GIRL. I am afraid of that woman because, shit, she played a very heavy guitar, but her voice was very ethereal. I felt like she could be Stevie Nicks on American Horror Story, because she is magical and witchy. You would think her music would be heavy if you just heard her guitar, but she is like, “I’m going to be light about this, but I’m still going to kick your ass with the words I’m singing.” My guy friend Aidan was entranced by her, but not in a creepy dude way. He was legitimately into her music, which I thought was cool, because Aiden is never into anything. Ever. 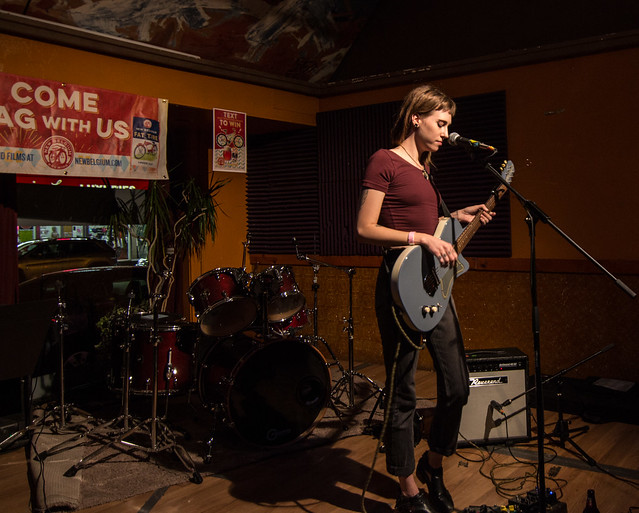 We went down to Waiting Room and, on the way, we saw M34n Str33t at Jake’s Block Party. Conchance was wearing a cape. He is fricking fantastic. I don’t even know that guy and I know he is great. He was just rapping in a cape. SuperConchance.

Million Little Voices was just finishing their debut set when we got to the Waiting Room. They were so into it and sweet and having a great time. More than anyone I saw that night, they were into it. Then, we went back to Pizza Shoppe. Maybe we saw M34nn St33t on the way back instead of the way there. I don’t remember. I do remember holding hands with the girl I’m dating and getting dirty looks from across the fence from a straight couple at the block party. So I just held her hand tighter.

Elizabeth Webb was my favorite act of the night. I have known Liz for so long and I had no idea how amazing she is. I really, really like that she performs murder ballads. She played her baritone ukulele and then told everyone that she bought the keyboard that was onstage, like, five hours before the show. I would not have known that. The set was gorgeous, dark. Nothing broke my focus. All my friends shut up (finally) and listened. She played Gravedigger, a Dave Matthews cover. My girlfriend started to freak out because she loves him a lot, so I was all sappy and grabbed her hand and held it tight and it was adorable. But I was still more focused on Liz than my girlfriend because the way she plays the ukulele is so specific and beautiful. It was eerie, sulky, dreamy and after every song, Liz would wipe the sweat from her face. At the end of her set, she thanked everyone for bearing with her sweatiness. She remarked that sometimes, when you are a woman, you put on eye makeup and when you are a woman musician, you sweat it all off. Then she declared that we would sweat on during this Femme Fest. 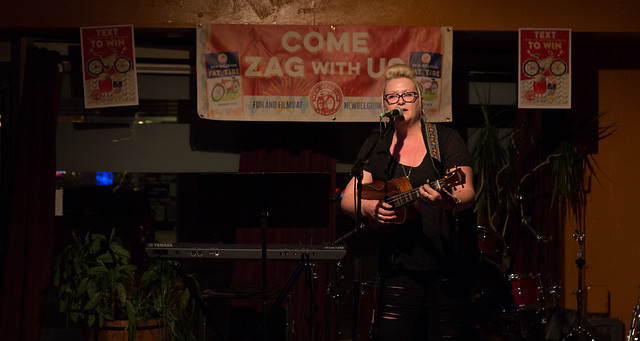 Then we went to Sweatshop. We stayed in the front room while Manic Pixie Dream Girls had some cable issues. We took squad photos and looked at the cool art. There were little creatures that looked like green monsters doing weird things on the walls and there was a huge pink monster on stage. And then there were a ton of blue and pink TVs with trippy images on another wall. My mom left us alone for a minute to go to Burke’s to watch her drummer, and being the teenagers we are, we got impatient and really hot inside the Sweatshop (it was so hot) that we went for a walk back to meet my mom at The Waiting Room.

We were sitting in the booth nearest the exit door before Pyrate started playing. I almost fell asleep in my girlfriend’s lap. All the teenagers were on their phones. Pyrate started playing their loud rock music. It started to pump me up and I was like, “I can do this. I got this. I can make it to the end of Femme Fest.” Sometimes at loud rock shows I get lightheaded because of how it vibrates my entire body so I went into the bathroom to chill for a second and then my girlfriend and me started making out. Everything in the bathroom was shaking because of the music. What I saw was great. Jess Errett is so sweet, but Jesus Christ, she can shred on the bass. She is so bouncy and cool about it. She told me later she had to pee really bad at the end of the set. Playing on the edge made her look like a badass. 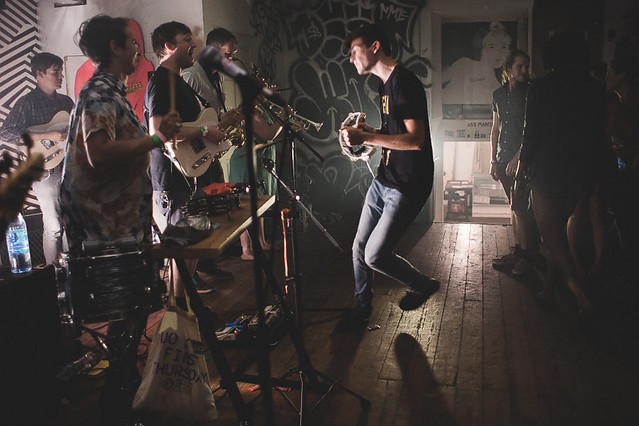 Life Is Cool is so cool. I loved all the percussion. Every instrument was treated with precision and they were all bouncy and I loved that it feels like a huge collaborative band, like the Talking Heads or something. So cool.

Femme Fest 2015 was sweaty and my ears were opened to new lady noises that day. I’m glad that Becky let us play.