There are certain quintessentially American events that perhaps only Hunter S. Thompson’s brand of freak-journalism could ever really find the heart of. The Kentucky Derby, for instance. Las Vegas, of course. Presidential elections and the Super Bowl.

Add Austin’s South by Southwest, a corporatized, urban mega-festival, to the list of things we wish Thompson could have covered before he passed away.

Because, like Las Vegas or the Super Bowl, it is truly a strange event taken out of context. Thousands of bands and tens of thousands of fans and members of the press descend on the modestly large Texas city for a week (not including the film and interactive portions of the festival) and utterly change its operations.

Bars and venues are renamed for companies shelling out exorbitant amounts of money to host bands playing genres originally founded against the corporatization of counterculture. Places never meant to host live music are filled to the brim for acts like Spoon. Traffic is rerouted around an entire portion of the city. Hotels are booked-full all the way to the outskirts of Austin, to the point where our Motel 6 didn’t even have an extra towel.

On any given night, Sixth Street is an uncanny blend of costumed attention seekers, grandparents, weirdos, frat boys, guys hocking CDs, children, drunks, street musicians, bums and some of the most handsome people in the country.

For someone (like us) without Thompson’s deft ability to weave seemingly unrelated instances into a crystalline cultural mirror, it’s nearly impossible to take in, except in pieces. Here are some stray observations and photos from Hear Nebraska’s time at SXSW.

Taken together, maybe they provide a truthful snapshot of the SXSW experience and point to the heart of the circus. Or maybe, like the festival itself, the phenomenon is too vast to ever find its center. 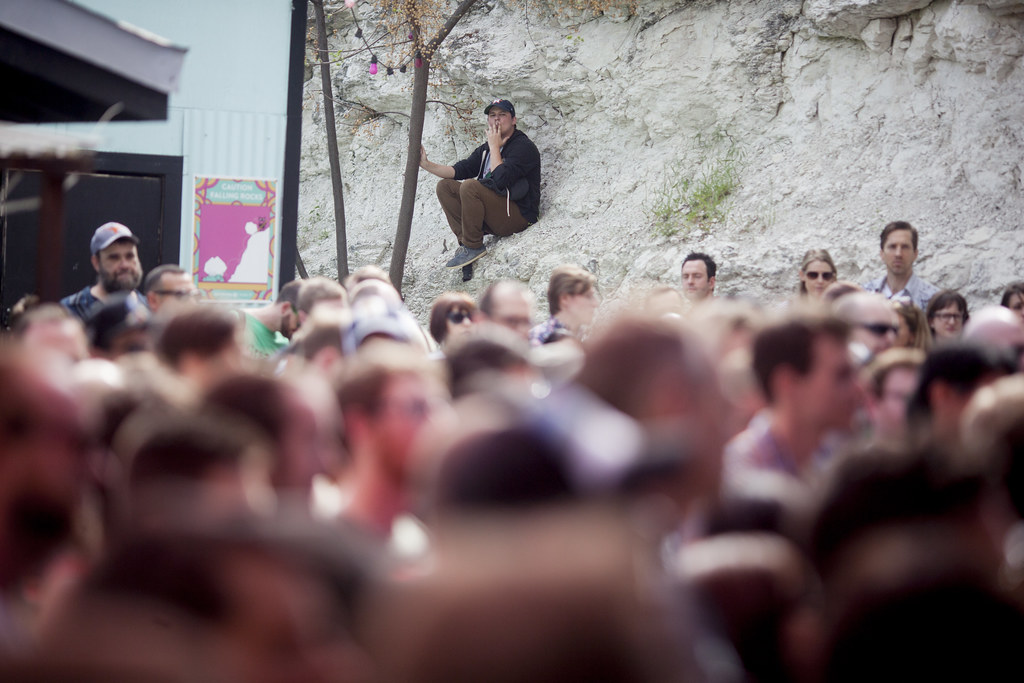 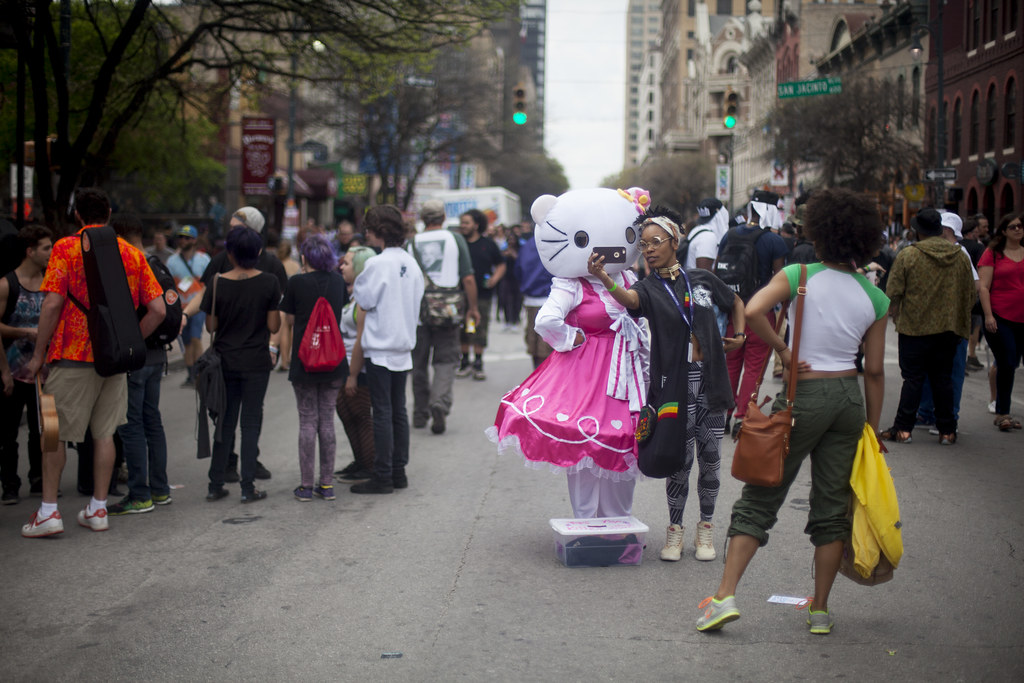 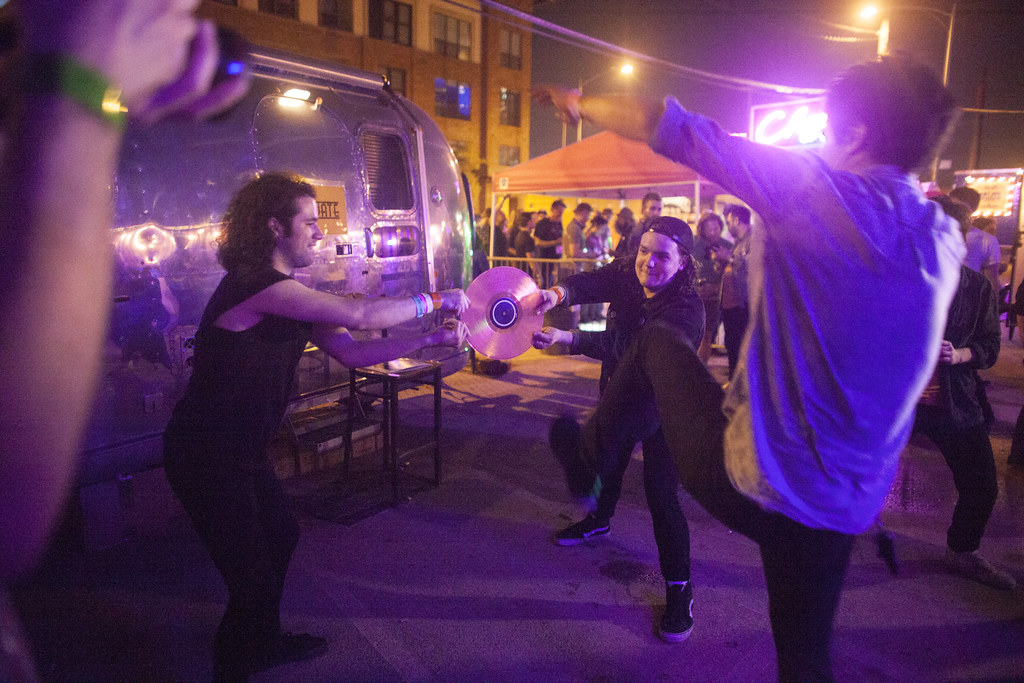 Say something enough, petulantly enough, and however right you are, the opposite is bound to sound more appealing. Did we hit some sort of saturation point this year where too many people bemoaned SXSW’s corporate obesity?

At the end of the day, it’s still musicians you like playing music you dig. Is it any more corporately handcuffed than your daily life? Or are its machinations just more visible?

Unless I want to live like Ben Kenobi, I’ve got to wring my hands in moderation when I see brands glued to the fronts of my eyes. You could still Debor-drift your way into random bars and see random bands, if you want. From what I experienced at SXSW 2015, I think a more relevant way of talking about the festival’s corruption is by way of access.

Rembert Browne of Grantland (a writer and website I admire) wrote an insightful piece during the festival on the overnight name-making of Leon Bridges. When we attempted to see him at St. David’s church Friday night, there wasn’t a shot in hell. Laura Marling was in line behind dozens and dozens of people in SXSW lanyards. As much as I love the piece, Grantland (owned by Disney) has access. $900 badges are no issue. A bangles wrist of backstage passes aren’t either. So SXSW is happening in a class system of sorts.

Much like when you realize there’s a stratified world above your paygrade in contemporary life, there’s the epiphany you had less of a shot than you ever knew. That’s from a press angle. It’s a short walk to seeing why exactly the same predetermination is a problem for bands.

The idealists are right. I just want to have a more enlivened conversation.

This festival is so incomprehensibly complex that it’s hard to believe there’s anyone in charge here. There’s the Austin Convention Center, which functions more-or-less as the base of operations, but among the volunteers staffing it, there’s no clear person with authority over anyone else.

On our first night, we ask a volunteer with a map for directions to the convention center. He sends us in the exactly wrong direction.

There are a lot of police officers around, who I guess are sort of de facto in charge. But that could be either comforting or disconcerting depending on your disposition, current state of mind, personal experience, etc.

But who is accountable? No one? Me?

It’s almost like SXSW just appeared. No one managed the evolution of life from space dust. But someone did wrap this official-looking wristband around my arm. 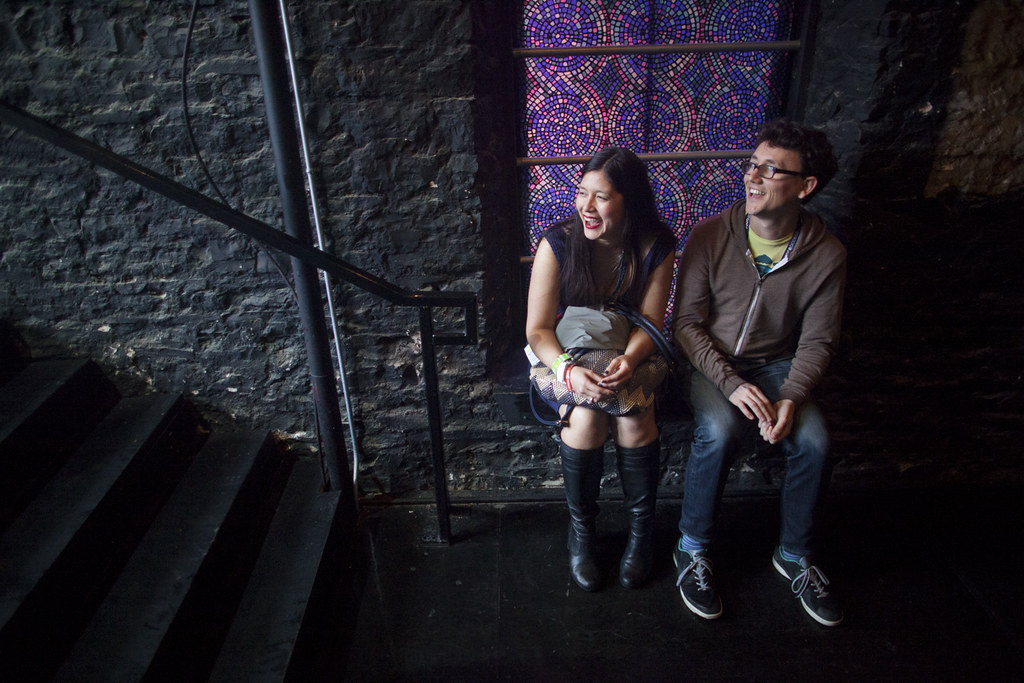 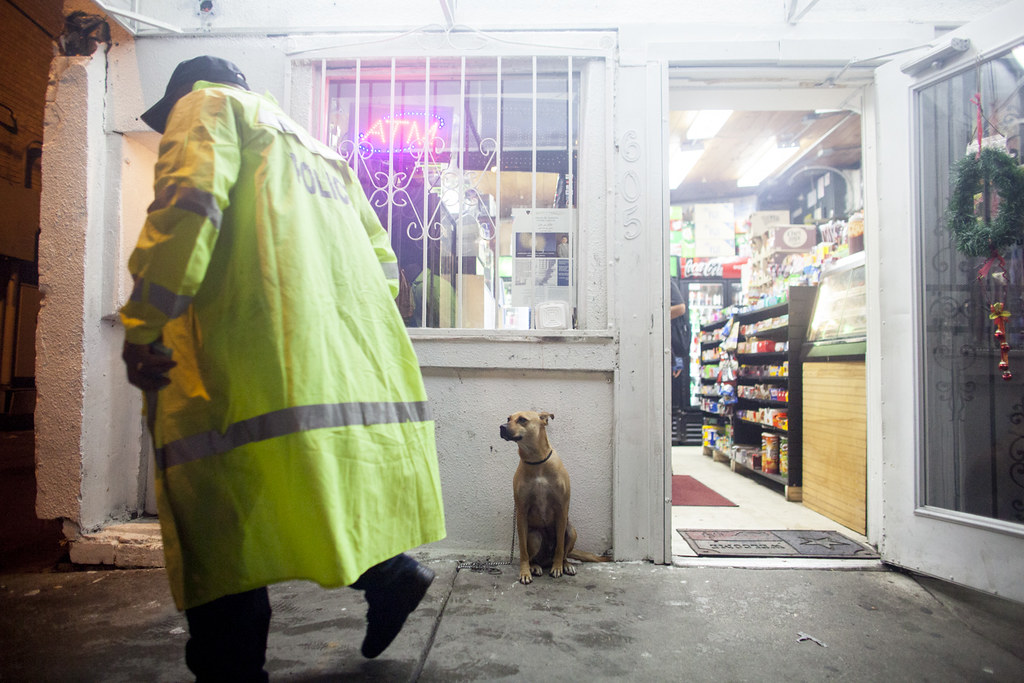 You know that thing where you’re drinking a tallboy of cheap beer and every sip already tastes like the inside of your mouth?

If you want to happily swallow the idea of SXSW, you’ll have to alter your antiquated definition of selling-out.

Does selling-out even mean anything when some of the best bands are playing the Vans venue or the Pandora venue or the YouTube bar or the Spotify venue or the Converse stage? Is it permissible only because these companies have some real estate in alt-music culture? Would we flock to see Earl Sweatshirt at the McDonald’s stage?

Fuck it, I probably would.

One day in, I had a pang of real appreciation for how hard it must be for touring musicians to live on the road and not dry up into human-sized pieces of booze and meat. To prioritize fruit, vegetables and water on the road must take impressive planning. The last day, I had a pulled-pork hot dog that probably took a year off my life.

“Sorry, kids, your grandpa didn’t take care of himself during SXSW 2015, so that’s why he just died unceremoniously and you didn’t get to know him one-year better!” 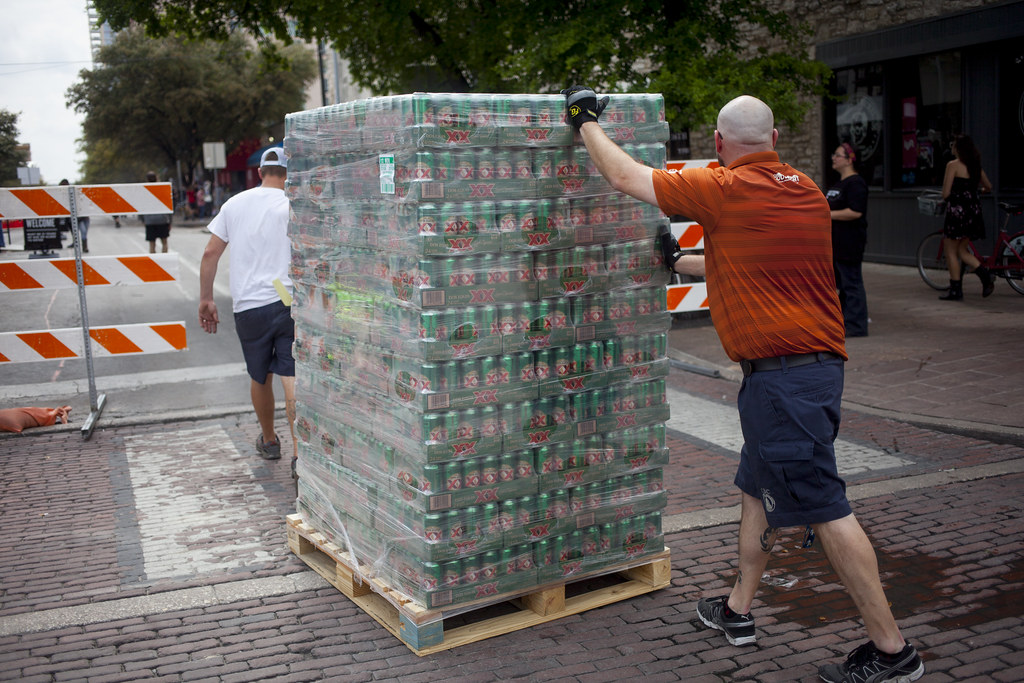 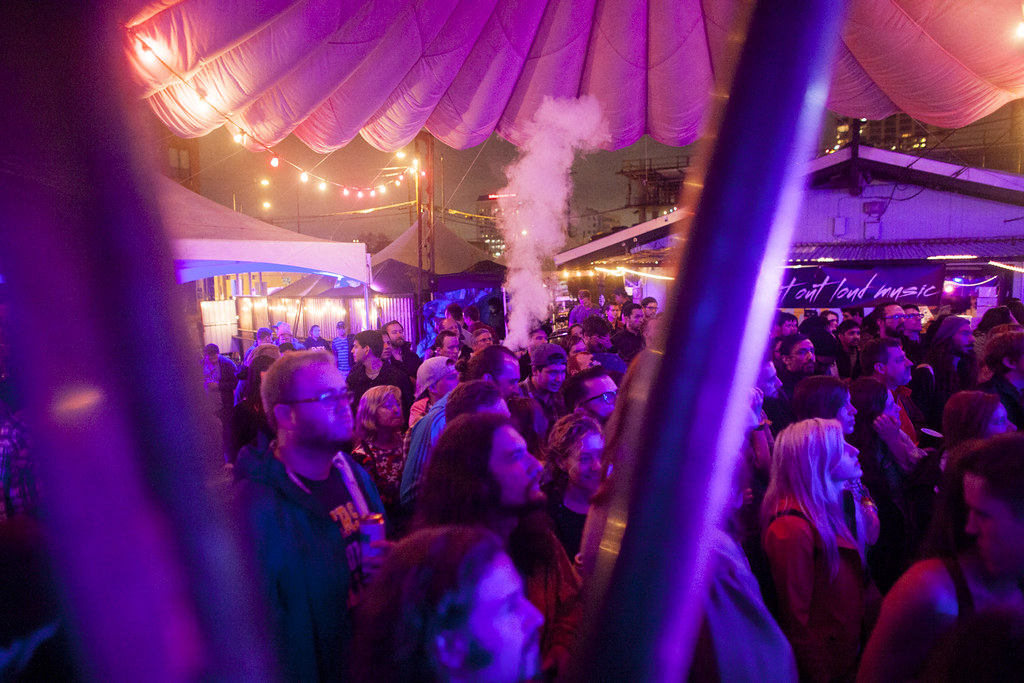 There’s this collective narrative about SXSW that it can be a hot-bed of discovery, but once you’re there, it’s hard to say exactly for whom. Anyone can make it big with a lot of hard work and little luck, right? Technically, yes. But probably not — the breakout acts broke out long before they got here.

A Rolling Stone writer, an NPR photographer and a Merge Records talent buyer walk into a bar. There’s no line to see the band, so they leave.

Which is fine, just don’t lie to yourself about the nature of opportunity. 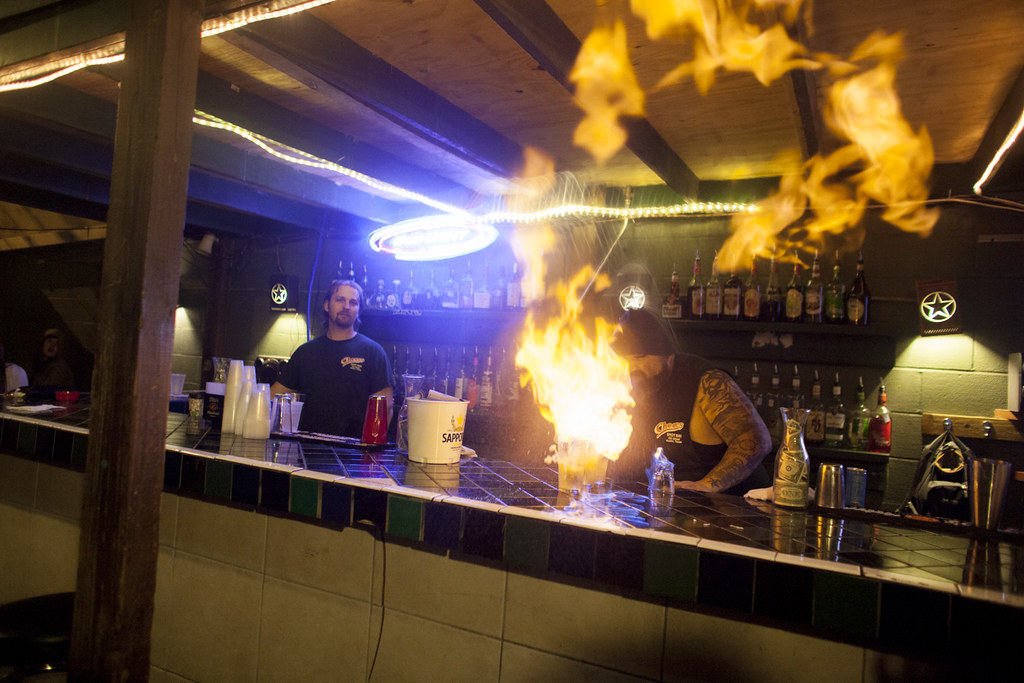 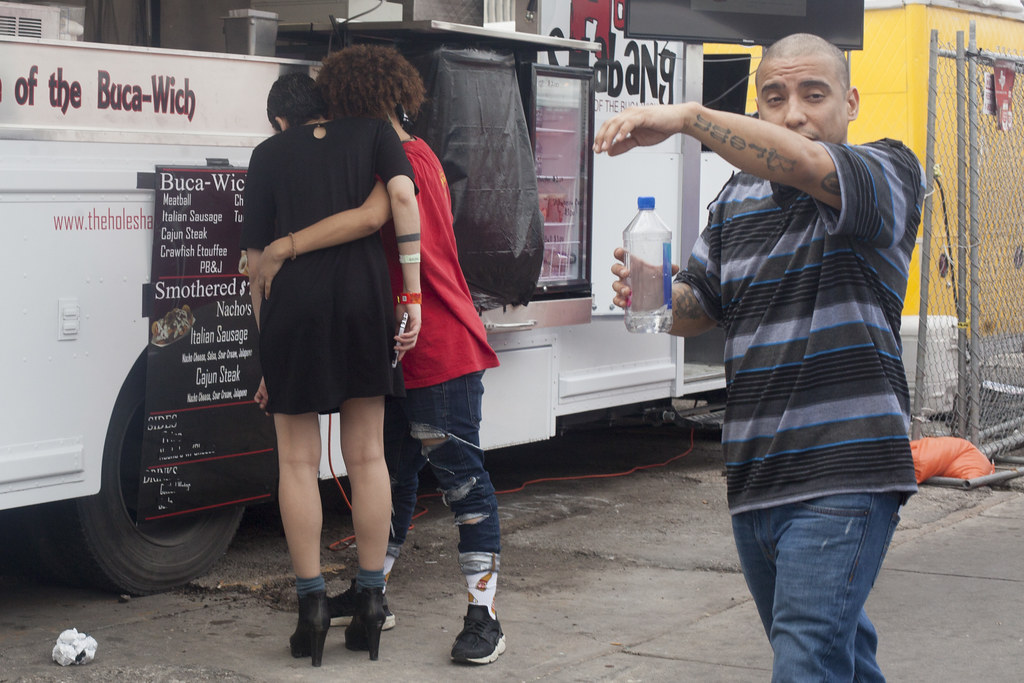 “Did you know that time is a flat —

“Nevermind, I’ll just drink your lack of originality. Is that six dollars, too?”

“You watch The Jinx yet?”

Start at the middle of SXSW (roughly the intersection of 6th and Red River) and I wonder how far you have to walk in any direction to forget about the festival. On Thursday, I thought photographer Andrew Dickinson and I found out when we walked nearly two miles to meet current Austin resident Jon Augustine (Kill County, Bus Gas) at Gourmand’s for a beer.

We arrived around 5 and we were the only green wristbands in the place. The rest were locals, one who emphatically recommended the nachos, served on a cafeteria lunch tray. When we emerged at 7 p.m., though, the formerly empty streets were packed by cars with out-of-town license plates and droves of people crowded the sidewalks back toward sixth street. 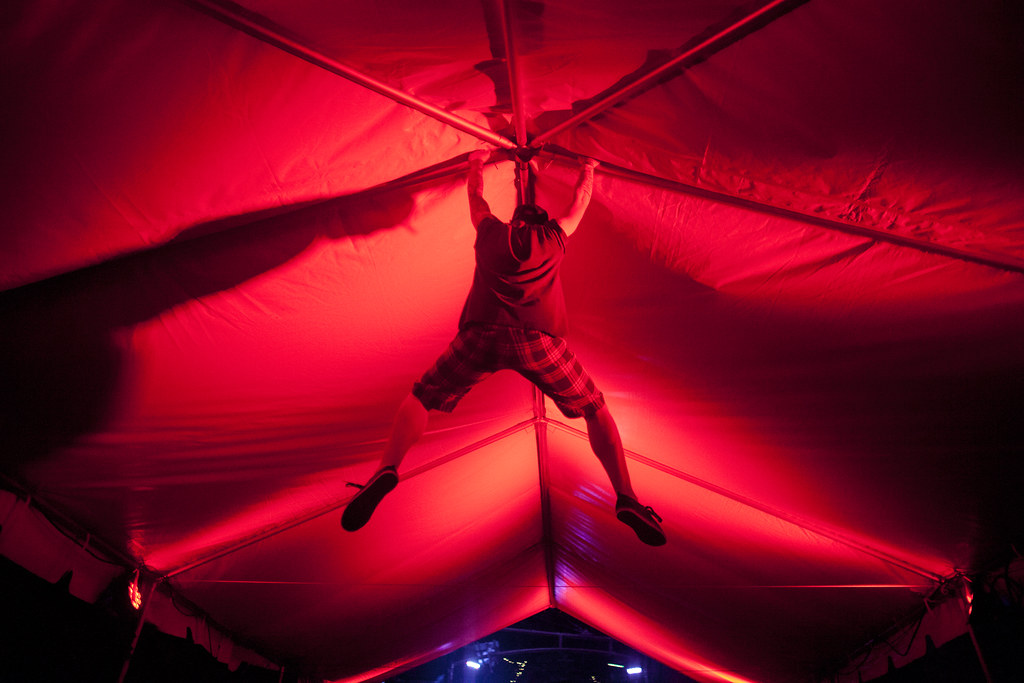 “HAHAHA but really, what’s a Zeds Dead, you guys? What time is it?”

Another failed quest to try again next year: Try to find one asshole that lives in Austin.

I guess I kind of just assumed that every local would be a jerk. Maybe it’s because, having spent my whole life living in Nebraska, I’ve been told that the kindest (and, indeed, the only kind) people live in the Midwest. Maybe it’s because I get on edge when my daily life in Lincoln is altered by thousands of tourists.

But every person I chatted with, every restaurant server, gas station attendant, random guy on the street, was genuinely kind.

Which makes me the jerk for assuming, I guess, and means I owe every Husker fan I’ve given the side-eye an apology. Austinites, y’all are good sports. 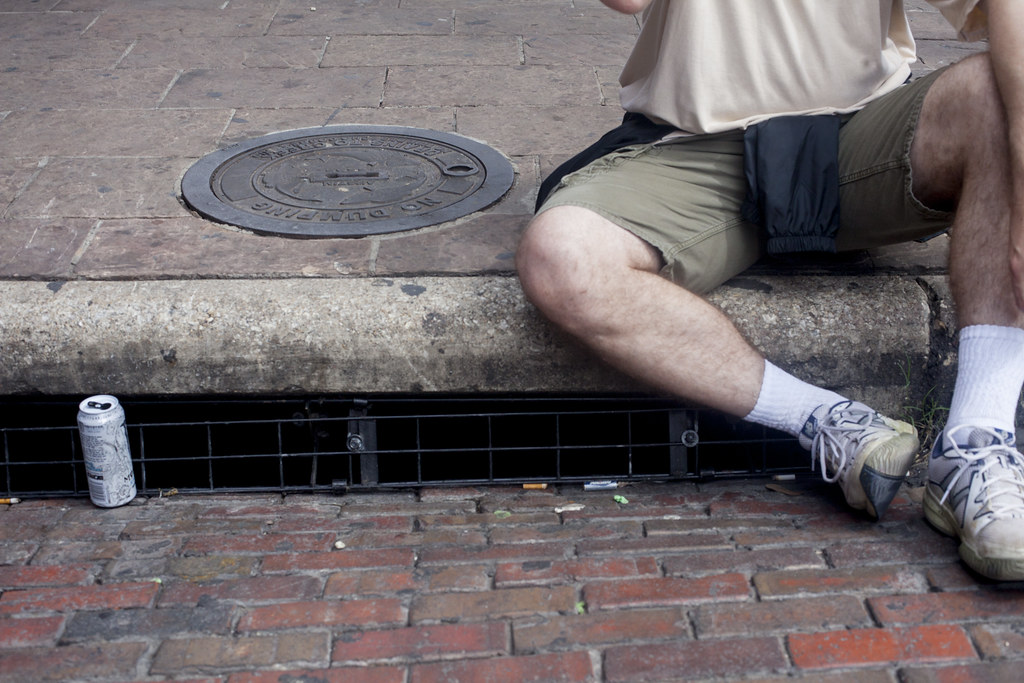 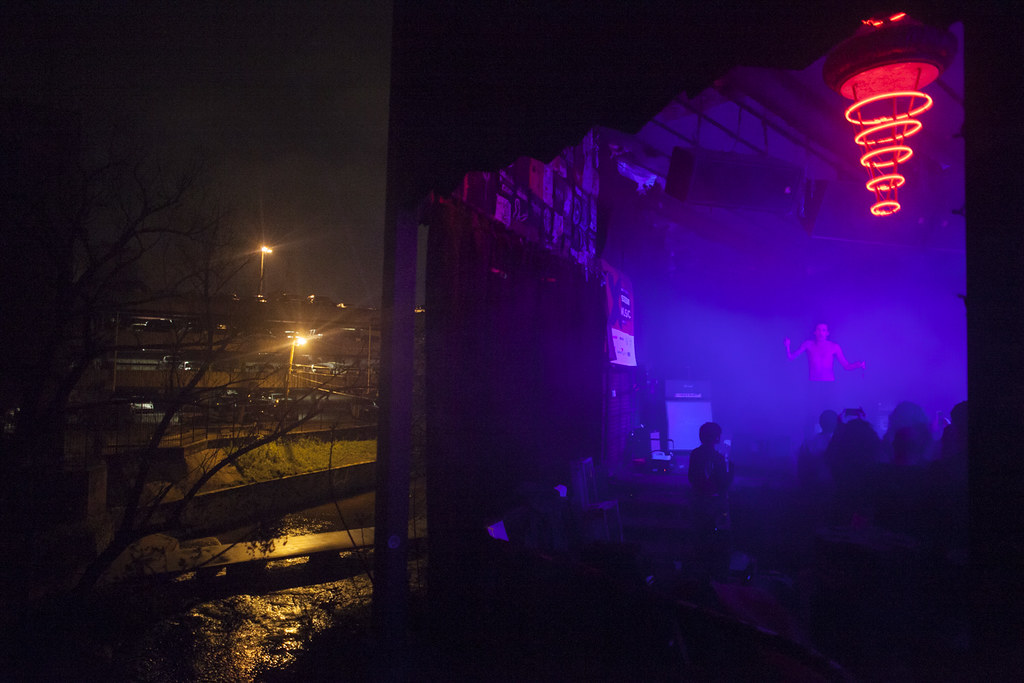