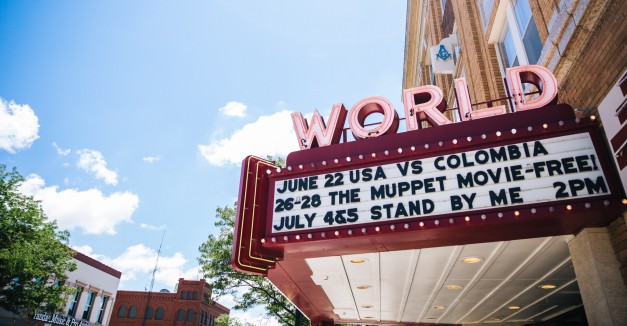 Broad-shouldered, compact, mid-30s and quick to soft smiles, house manager Bryce Jensen stands in the sunny lobby of The World Theatre. He has the slight air of man under pressure — he’s the sole day-to-day operator of the Kearney theater — but that’s well underneath a layer of palpable and friendly confidence.

There’s almost certainly a lot to accomplish on the June Friday we meet, but it will be done when Jensen does it. In the mean time, his enthusiasm for a basement-to-backstage-to-balcony tour of The World feels wholly genuine.

Jensen had been gone for seven years, when he moved back to Kearney just before The World reopened in 2012. As a native of the 37,000-person college town, he’d found community leaders to be a rare premium growing up — the sort of people who’d, say, stop a historic theater “from being turned into a sports bar.”

Sitting in the spacious table seats of the The World Theatre’s soothing, dark scarlet interior, Jensen describes the transition from adolescent wishfulness to adult responsibility upon returning. Become house manager of a downtown landmark, and overnight, your perspective can shift away from, “Why is there not more to do?”

“All of a sudden … you’re one of those people who’s grown up and is actually affecting the way the community is perceived,” Jensen says. 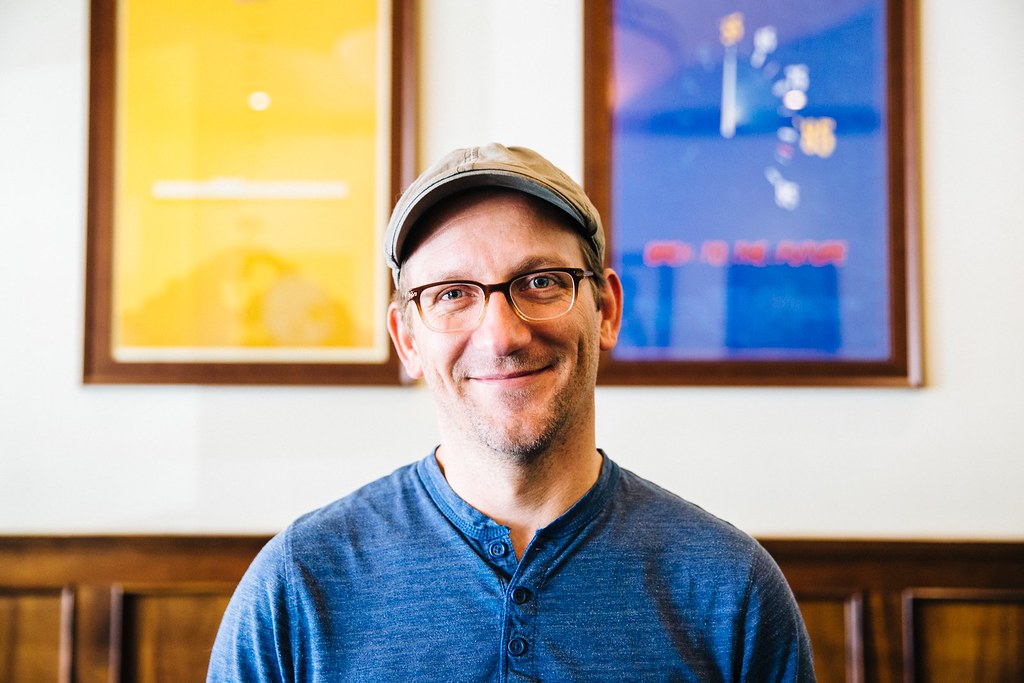 As it stands now, the building itself would be hard pressed not to color an outsider’s street-bound perspective of Kearney’s downtown. Aside from the eye-catching Museum of Nebraska Art (MONA), The World is perhaps the most noticeable single structure in the business district.

The posh 203-seat theater looks vaudevillian with a rich, modern chic. The ornate plaster and lattice work around the proscenium is all original, though it was covered up by drywall in the ’80s. Based on the atmosphere, you could enjoy a piece of ’60s art film in quiet reverence, or just as easily holler along with a rockabilly band.

Put another way, the theater is far from stodgy, but it’s not the sort of place you’d leave your popcorn or empty soda cups on the floor.

First opened in 1927, the theater was a single-screen outfit that hosted silent films and vaudeville acts. In the ’70s and ’80s, when other cinemas moved into town, it shrouded its classical attributes, building a wall straight down its middle to outfit two screens. Its disarray may have peaked in the 1970s. Jensen smiles and adds the quick, sheepish footnote that it ran a few late-night adult films in the ’70s.

“It got kinda dumpy and had a funny smell,” Jensen recalls, “But it was still cool. I saw Return of the Jedi when I was little, one of the few times the balcony was open.” 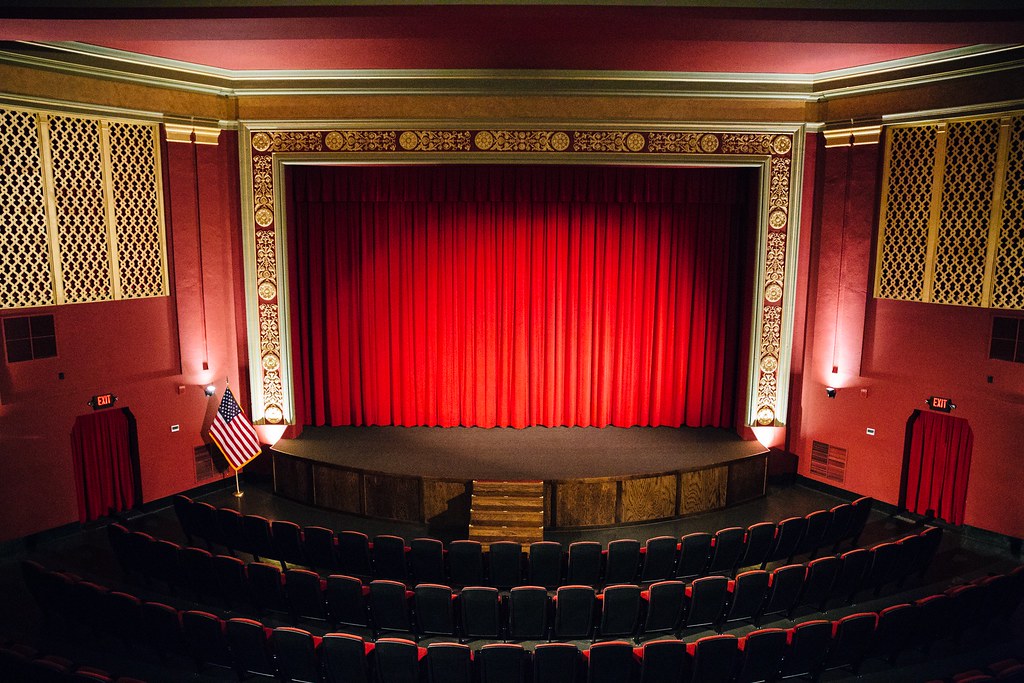 The World closed in 2008 when it was sold off by its owners, and after four years of fundraising, Kearney native and Hollywood screenwriter Jon Bokenkamp spearheaded the campaign to reopen The World in 2012.

Today, it’s operated day-to-day by Jensen — who reports from his house manager post to its nonprofit board. He gets help from hundreds of volunteers with a passion for the theater’s history and community stature. Before most film screenings and events, Jensen will take a minute to speak to the continued need for volunteers.

“It spans the whole community,” he says. “There’s a lot of diehard volunteers who used to work here. They just keep coming back.”

You can tell upon entering the building, by its movie posters — sparse, arty homages to Reservoir Dogs, Up, The Birds and Back To The Future — that The World’s bread and butter is film. With Bokenkamp’s keen industry eye from Los Angeles, Jensen books new indie films and documentaries, like Ex Machina and The Wolfpack. But they also screen a variety of classics and pop culture neo-classics: This summer, that’s The Seven Year Itch and Smokey & The Bandit, for instance.

But live acts have constituted a significant portion of The World’s programming since 2012.

On the music side of things, it’s hosted Nebraska folk and country acts such as The Bottle Tops, Jack Hotel and Dylan Bloom Band. Smithsonian-certified traditionalist country duo Bob and Shelia Everhart have toured through. World-renowned tenor vocalist Nathan Pacheco sang there in 2013 with the Nebraska Chamber Players. Nashville artist and current University of Nebraska-Kearney student Alexa Kriss rented out the building for a CD release show.

And in September, Omaha-born singer-songwriter and Emmy winner Jim Salestrom will do a pair of dates at the World and record a live DVD of the performances.

Installing an in-house PA system will probably be the theater’s next goal for full-fledged concert outfitting, Jensen says. That, and maybe taking on a live theater production, but that would be a push for backstage space. 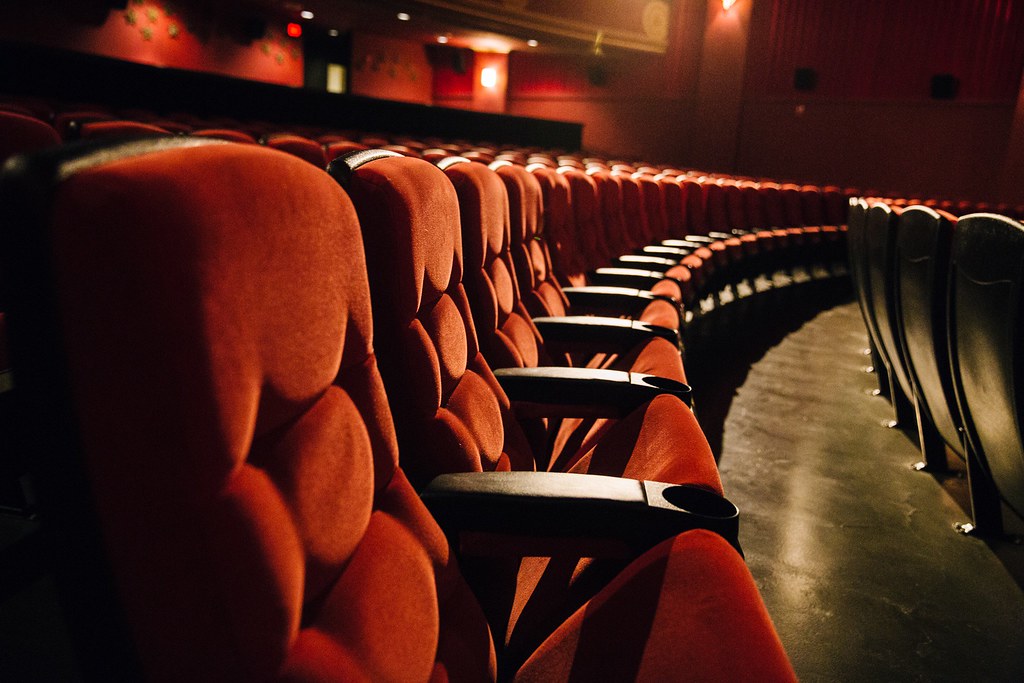 Those future ambitions, running the production booth, corralling volunteers, chasing down films from studios as an independent single-screen theater are all a labor of love for Jensen. A passion for art and entertainment makes it worthwhile, but so do his own life milestones at The World and hearing other people’s.

“This was always our hometown theater,” he says. “No matter how dingy, or whatever it was, it was still ours.”

He remembers his dad taking him to movies, even when he was grounded from watching TV. Film screened in public was clearly considered a higher pursuit. He hears stories from old couples coming to movies now who had their first date at The World.

“This town has a lot going on, and I truly believe that,” Jensen says. “Many communities would tear this down and put a bank here. We’re really striving to hold on to our history in this business district. This was, and still is, the heart of Kearney.”