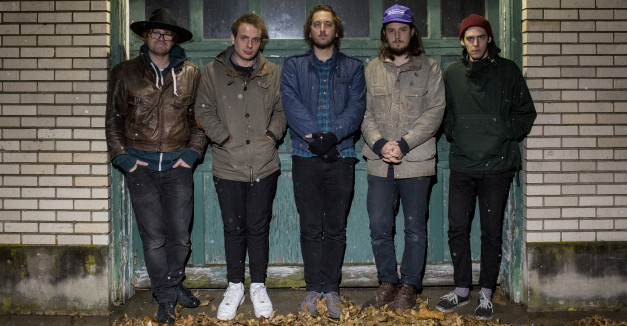 On Friday evening a bitter, wintry rain that should’ve been snow falls on Lincoln’s Near South neighborhood.

The weather is a drastic change from the eerily-mild autumn we’ve had so far. Like a sudden shift in moods, long afternoons are replaced by quiet nights inside with close friends. A time for fortifying and relying on those relationships constructed during summer’s myriad lake days and music festivals.

On the first floor of an old brick house that years ago was partitioned into six separate apartments, like so many century-old homes in this neighborhood, the members of Reptar gather on couches, talking about community. The question roughly amounts to: how is it made?

Often, we see community forged at the intersection of intention and circumstance. 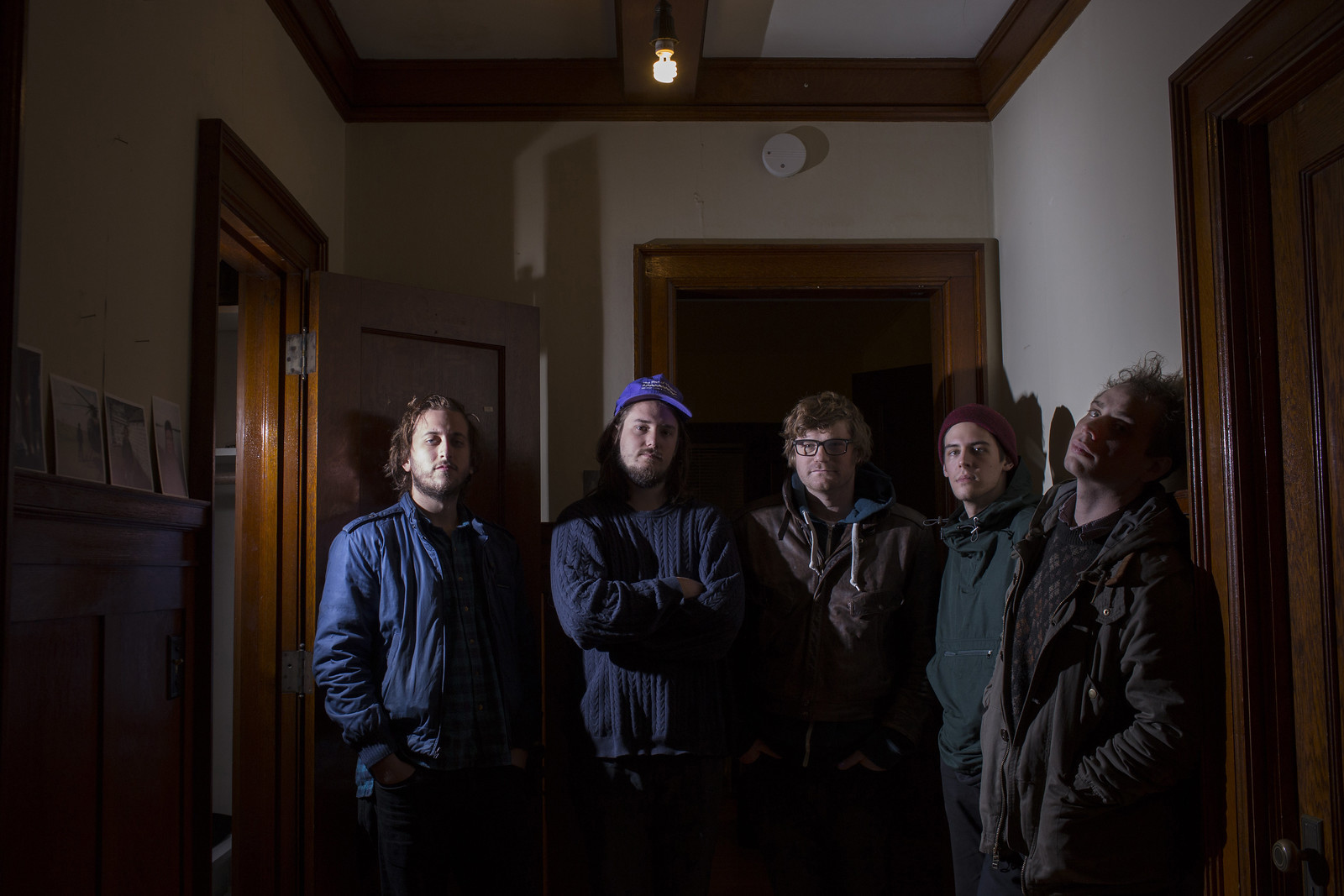 In this very neighborhood, Lincoln’s most storied, urban and diverse, a redevelopment campaign is underway at the hands of a coalition of local and national groups. The SoDo initiative has been met by grassroots organization We Are Vital, which has held the campaign accountable at every turn. We Are Vital exists primarily as a means of organizing, informing and connecting Near South residents. It’s a loose structure for what already exists — a neighborhood that cares about itself. Community given a name and a Facebook page.

We Are Vital is intentional, but it wouldn’t be without the circumstantially (geographically) connected people it represents.

Reptar was born in Athens, Ga., itself home to a storied music community including the likes of R.E.M., The B-52s, The Drive-By Truckers, Of Montreal and Elephant 6. Even the small cross-section of Athens’s most popular acts is hard to draw any lines around, as some writers have tried to do.

Moreover, generally calling Reptar part of any “Athens sound” brazenly ignores the fact that Athens isn’t just home to indie pop dance acts. There are surely hardcore bands, hip-hop artists, etc. A community, at least, is made of super-fine details, not broad strokes.

So is it disingenuous to try to explain a community? To connect it and box it up? We think maybe not, but you will have to tread lightly. 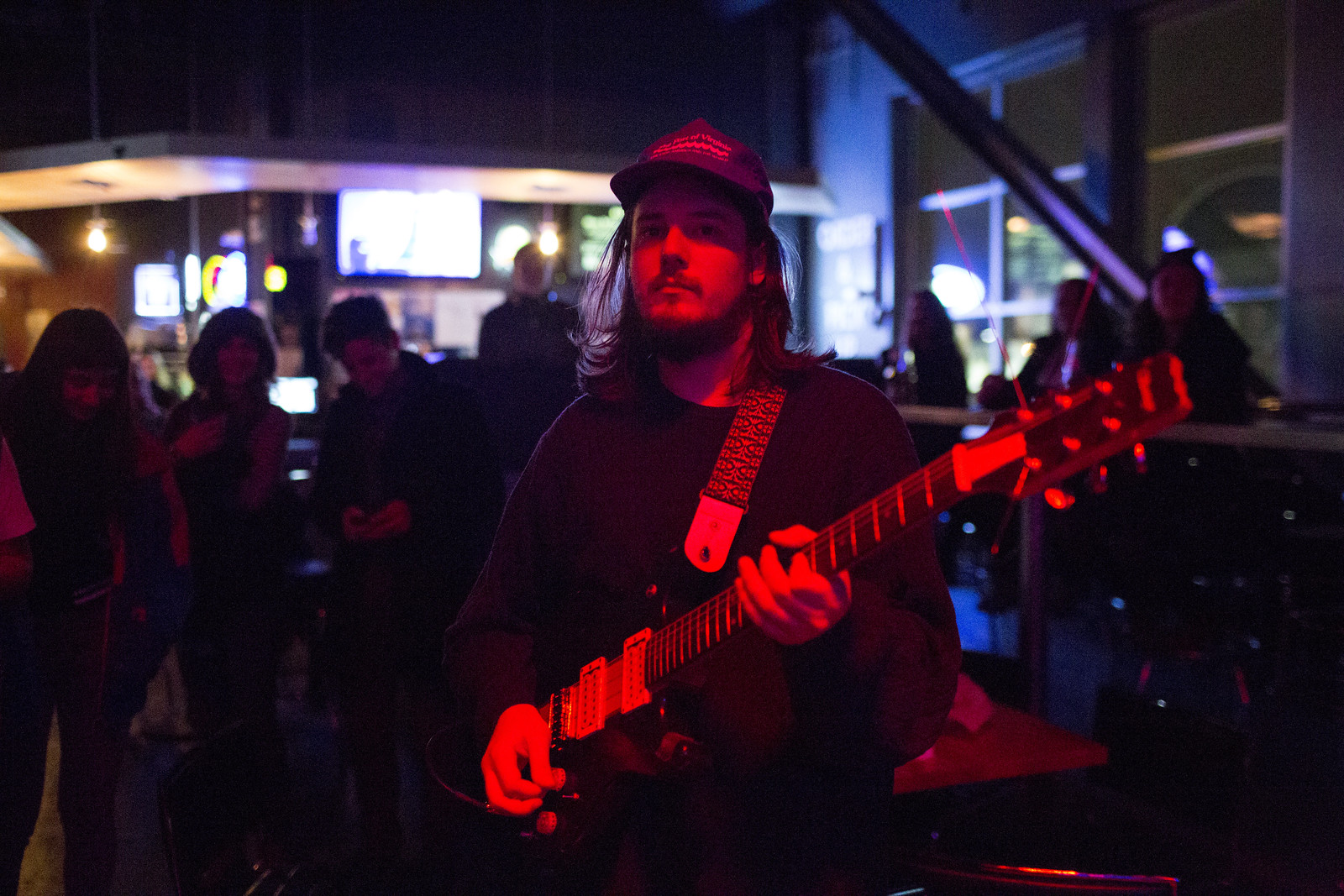 People who have known each other for years or played together as teenagers are the components to communities. Take Breathers, out on this tour with Reptar. Breathers makes up three-fifths up Reptar now, too. They say the set came together in about a week of practices because Breathers has known Reptar’s catalogue for so long.

“That exists infinitely through music scenes. To me that’s all facilitated by playing shows,” Ulicny says.

Two years ago, Ulicny became the unwitting heir to a Nebraska music tradition by moving from Georgia to Omaha.

That path has likewise been worn by Todd Fink (The Faint), Orenda Fink and Maria Taylor (Azure Ray), Derek Pressnall (Icky Blossoms, Tilly and the Wall), Nick White (Tilly and the Wall) and engineer and producer Andy LeMaster, who worked on Reptar’s expansive Lurid Glow, released on Joyful Noise in March.

“It’s kind of a thing,” Ulicny says. “I had no clue until I started talking to Andy (LeMaster).”

The flow has never been concentrated enough to call it a migration. But that movement tethers Omaha to the Atlanta-Athens music community all the same.

“There are people in Atlanta who are super up on the Omaha music scene. It goes way deeper than I was ever aware,” Ulicny says.

“Last night was like a homecoming show in a way, since Graham lives there,” says bassist Ryan Engelberger of the band’s Thursday night Omaha show. On Friday, Reptar and Breathers are at Vega with Icky Blossoms. 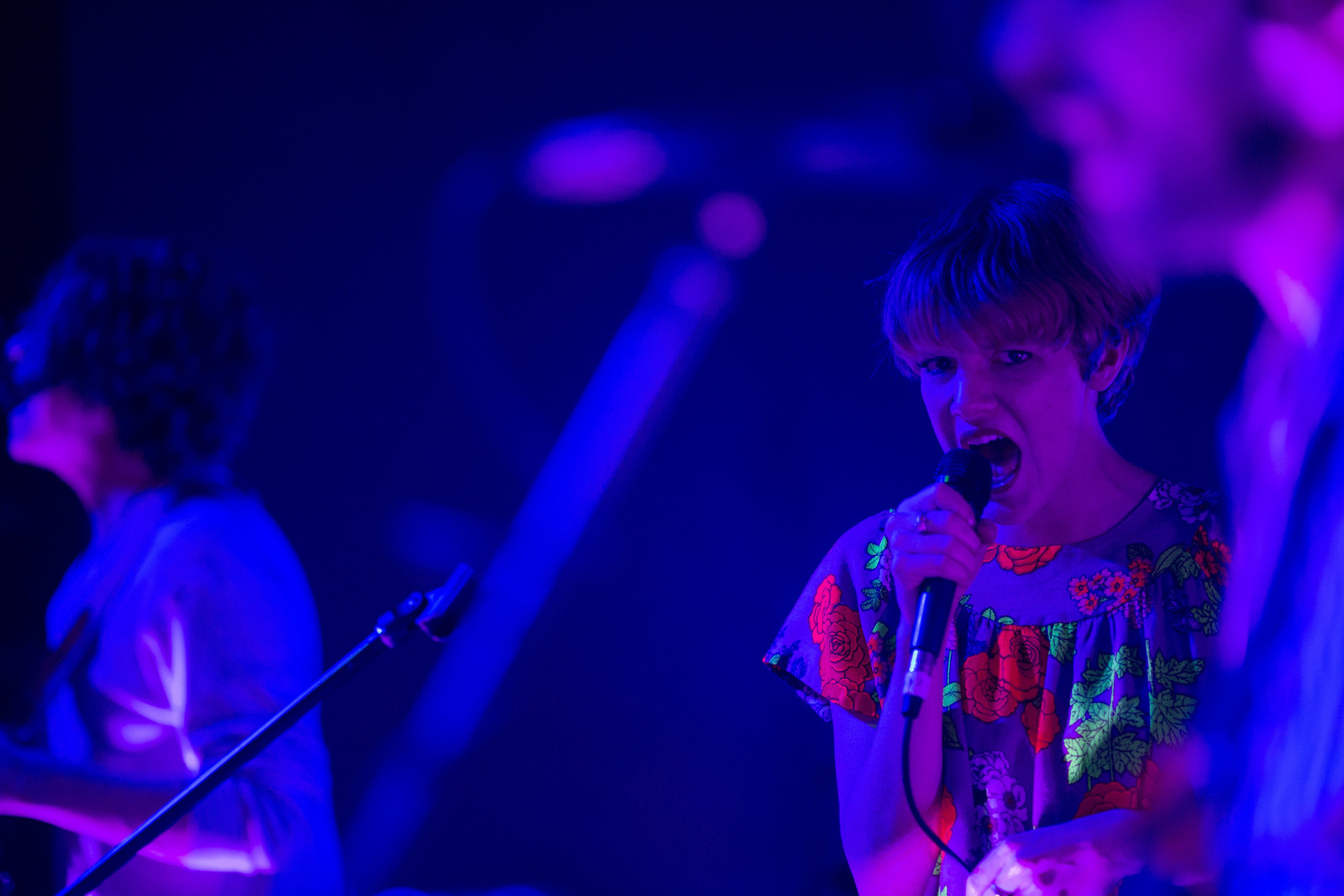 Sarah Bohling and Keith Rodger of Icky Blossoms made the early trek from Omaha to Lincoln along with Reptar. The last year has seen Icky Blossoms become something of an Omaha-based counterpart to Reptar.

It’s hard to quantify the exact usefulness of those kinds of relationships, the benefits being as nuanced and varied as the people who inhabit them. We know that they’re good for us, but can we ever put a finger on exactly why? 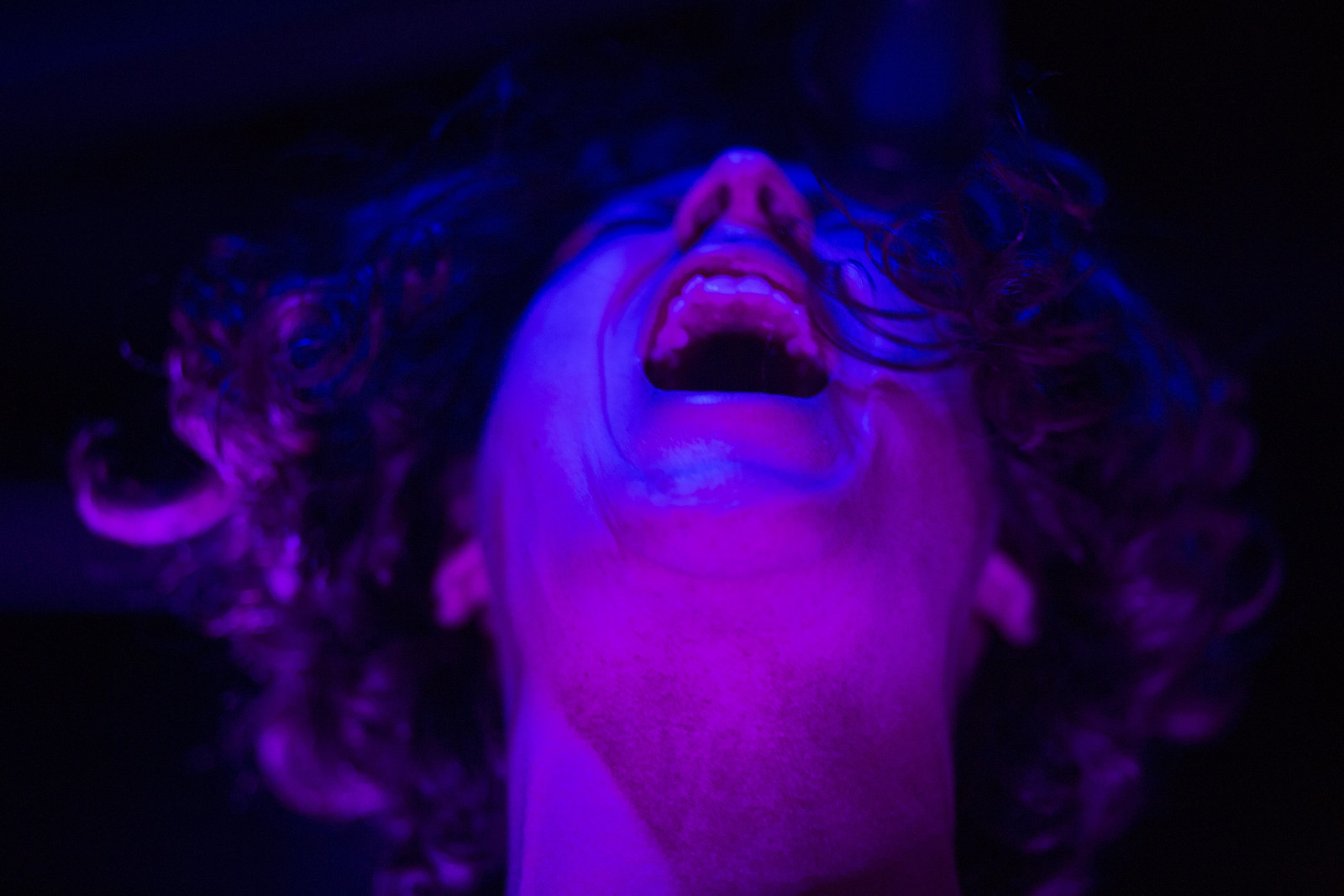 At Vega, the rain has abated, replaced by an angry, bone-chilling wind. The crowd for Breathers is small but attentive.

There’s one major pothole in the show — the sound. The normally crisp Reptar sounds as though it’s being played through a tin can. Icky Blossoms and Breathers struggled through the same issues.

Around 100 people made it to Vega for Reptar and the crowd’s interest is fleeting. Reptar is first and foremost a dance band with it’s lofty synthesizers and pounding, hollow percussion and their live show reputation reflects that. But tonight the audience is less moving-bodies and more shifting-weight, glancing around the room. 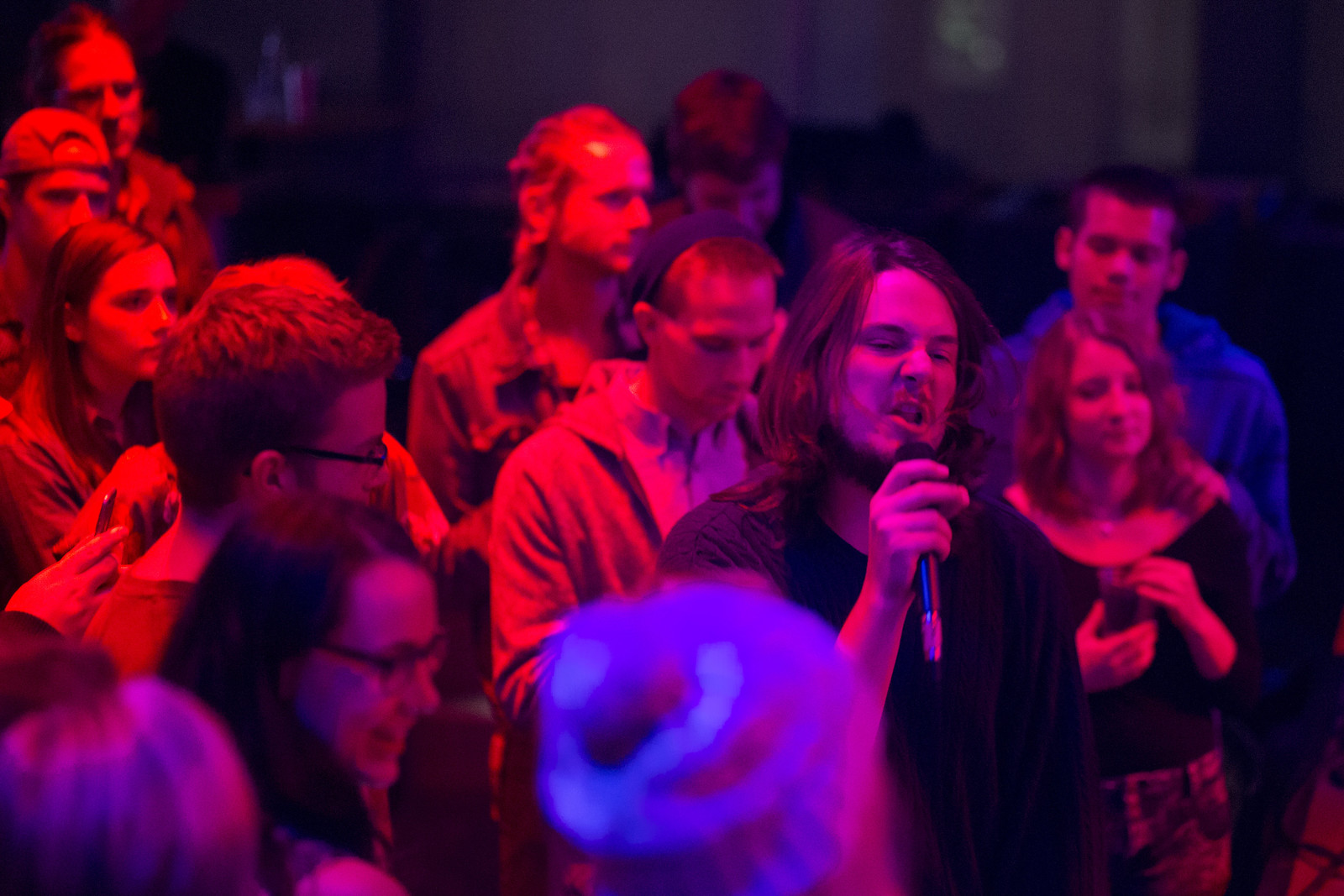 The situation comes quickly to a head in the first half of the set. In between songs the band looks to the sound person, index fingers pointing up for more volume in their monitors. Eventually, Ulicny, who has ditched his guitar because of amp-related problems and is crooning from the venue floor, stops a song midway through. 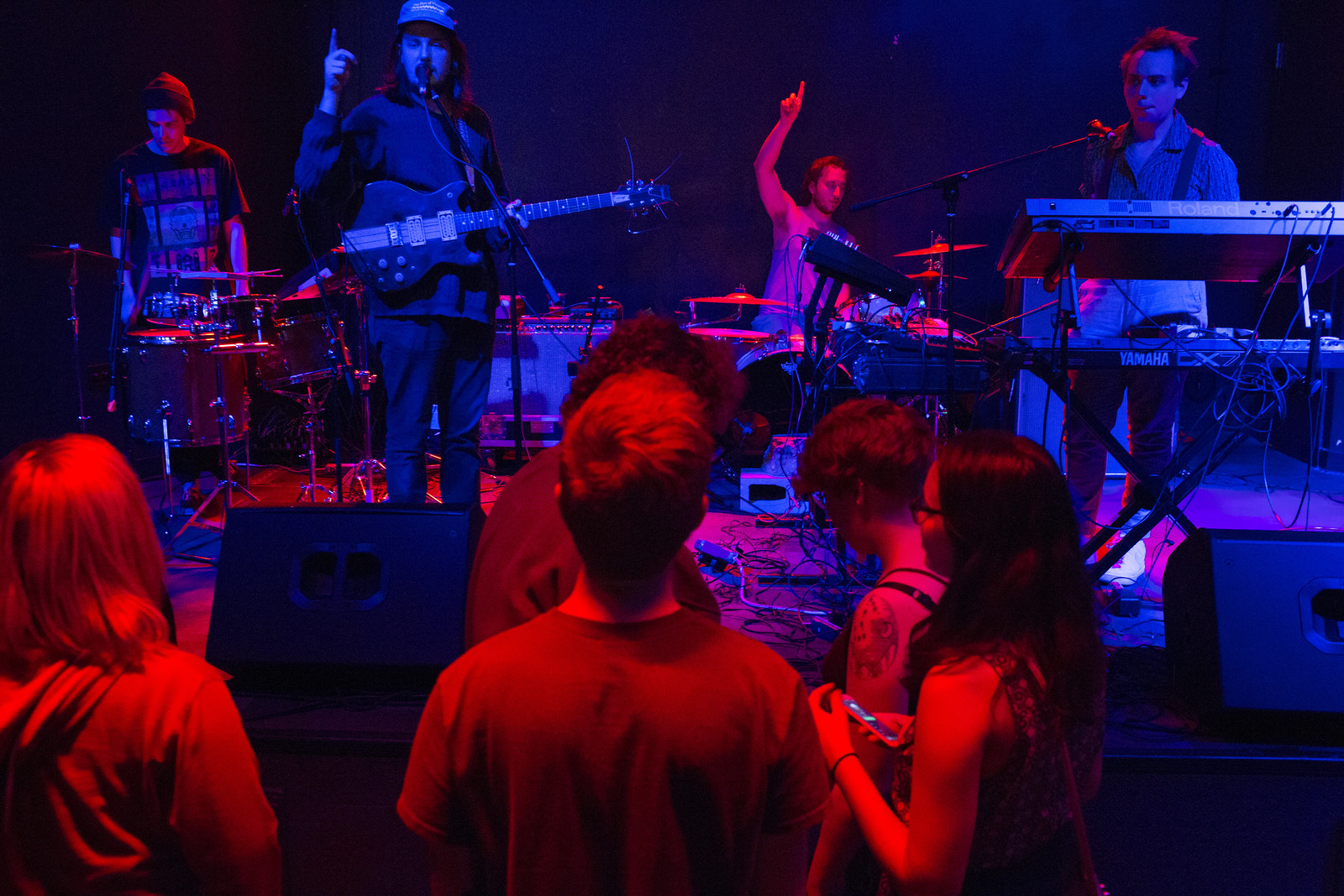 “This is bad,” he says toward the sound booth. “We need to soundcheck again.”

An attempt is made to resolve the issue but you wonder if the damage is already done. Can the mood be salvaged? Turned from unease into a Reptar-driven dance party?

It seems likely not.

Shortly though, Pressnall and Nik Fackler, also of Icky Blossoms, are weaving through the crowd, guitar amp held aloft. They hook it up for Ulicny while Reptar plays on. The duo’s mission then turns to reviving atmosphere, equipped with Icky Blossoms’ unflappable commitment to joyous dancing. And it spreads, shifting at least the crowd near the stage from stiffly-held bodies to actual music-driven movement. 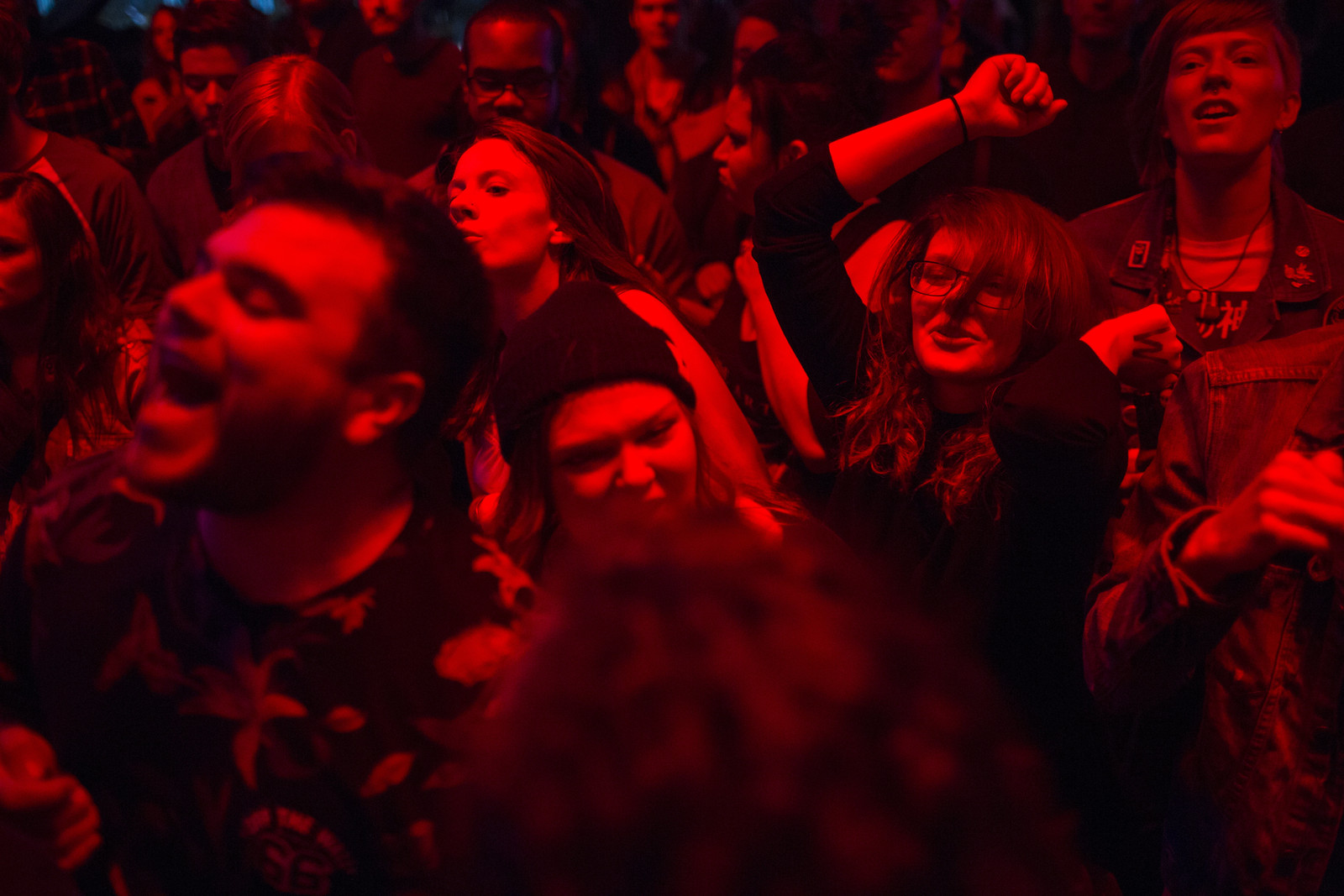 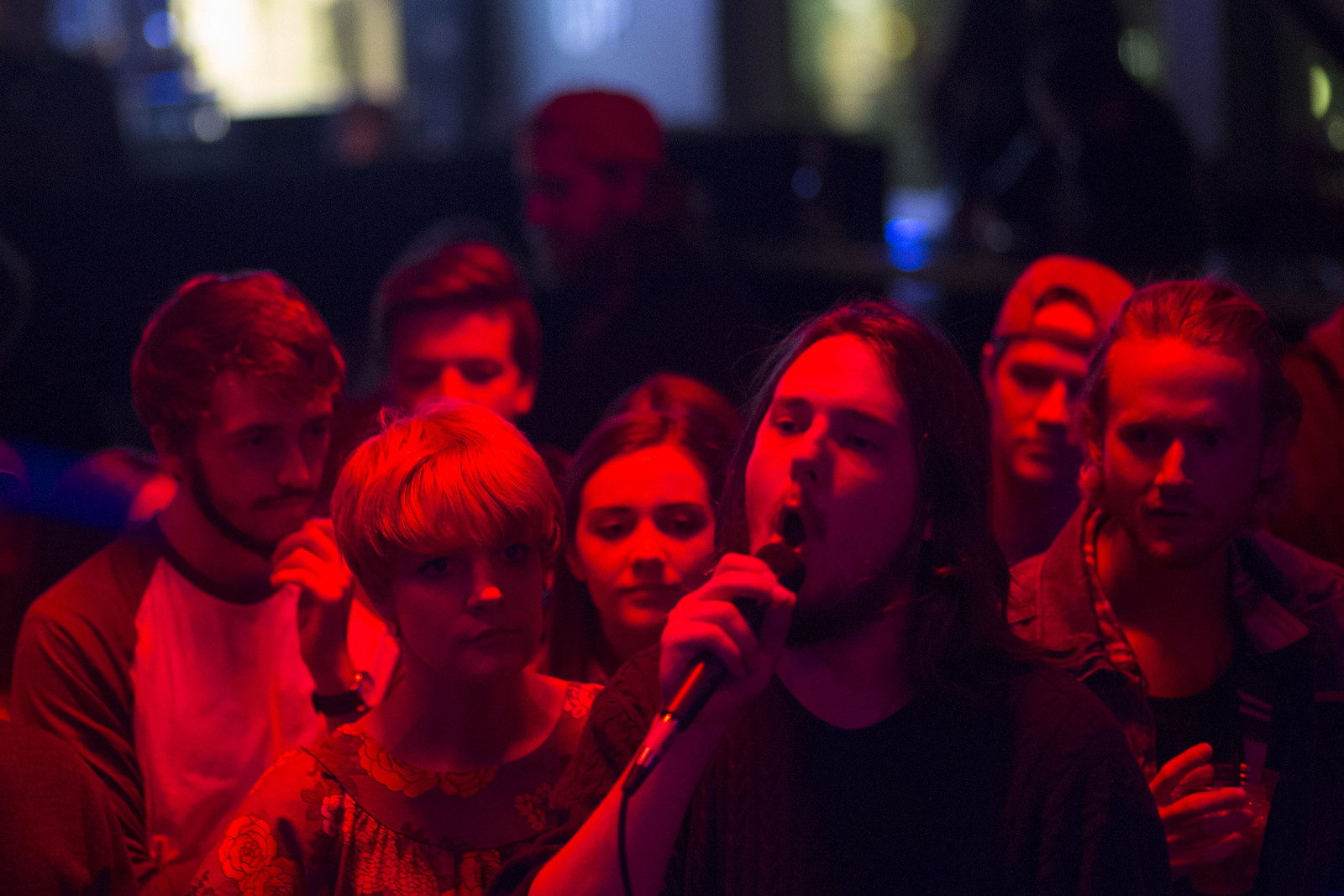 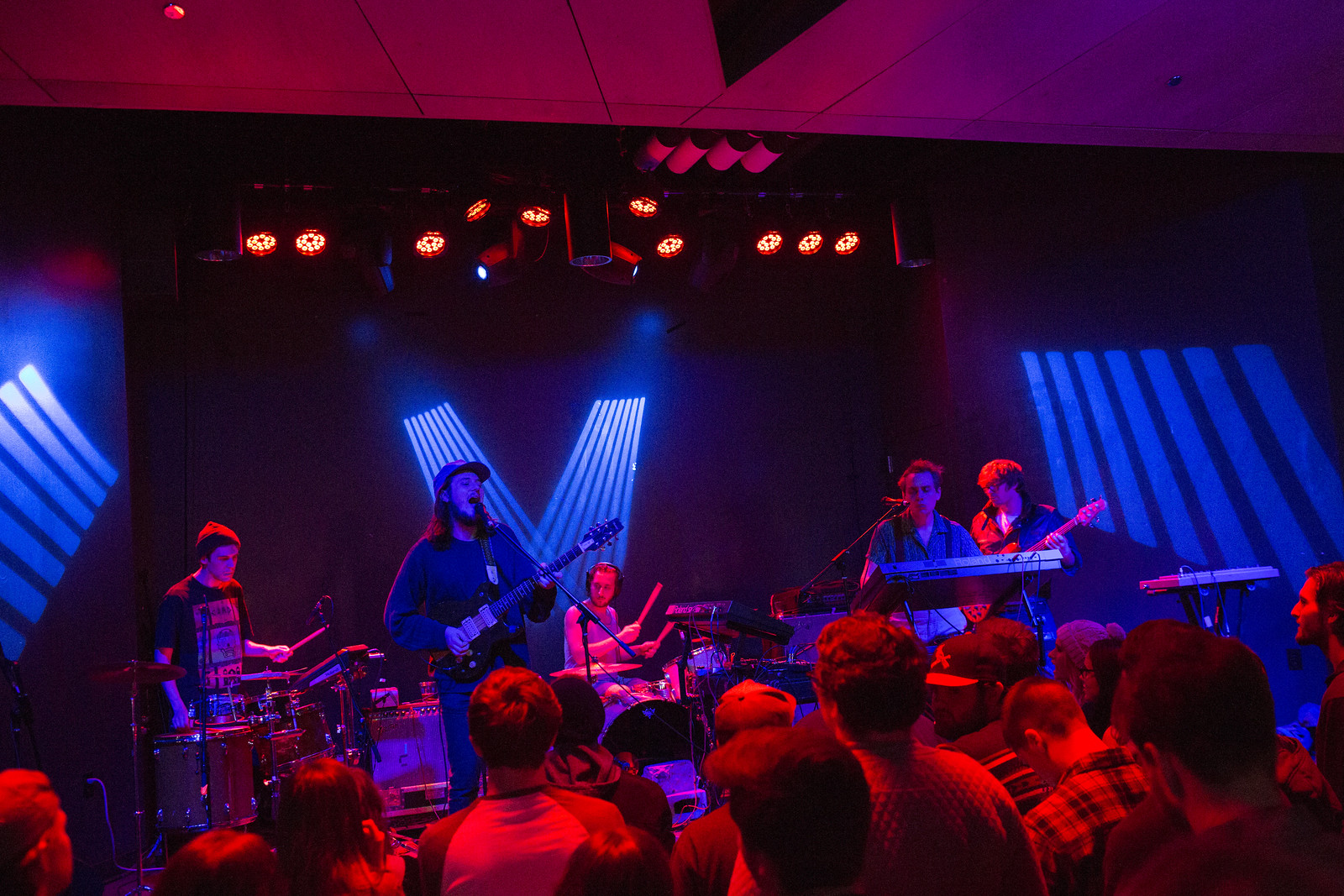 Those moments perhaps went unnoticed by anyone in attendance and maybe by Reptar. It’s possible that not even Pressnall and Fackler realized what they were doing.

Still, it’s a scene that deserves appreciation and couldn’t have happened without a little community-building.

So we can talk about community, ask ourselves how it exists and wonder at the circumstances that allow for it. But to see its purpose in action, as on Friday night, lives just beyond the reach of explanation or dissection. It’s as simple, as conscious as dancing to your friend’s band.