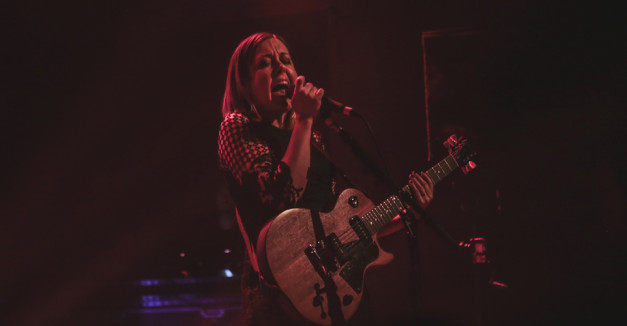 In the marathon minutes before Carrie Brownstein’s guitar first cut a razor line through Slowdown, the overhead speakers were silent. No Father John Misty or Mystic Valley Band or MGMT, recent staples. No curated classic rock.

A void of sound, until you listened.

Right there. A two-note ambient hum, like a child on a plastic piano doing Hans Zimmer.

Whether the non-traditional house music warm-up was Sleater-Kinney’s call or not, I don’t know. But it was different. Like a hearing exercise in the plaintive pocket of crowd chatter between Minneapolis singer/rapper Lizzo and the reborn Pacific Northwest punk band. As though the thinking was, “If your ears find this frequency, they’ll calibrate and come to center.”

This is not the move of a shruggy punk band that’s about to wrench the amp knobs up and blow you out. It’s in the playbook of a force that recognizes its own utter precision. Not necessarily overselling the main course. But here, have this palate cleanser. Given the angry surgery that’s about to spill from guitars, drum fills and alt-classic larynxes, you may want it.

That’s one way to remember Friday night’s show. Say, for Brownstein’s striking, one-of-a-kind guitar tone. For the exercise — maybe the feat — in rock minimalism that was about to follow. 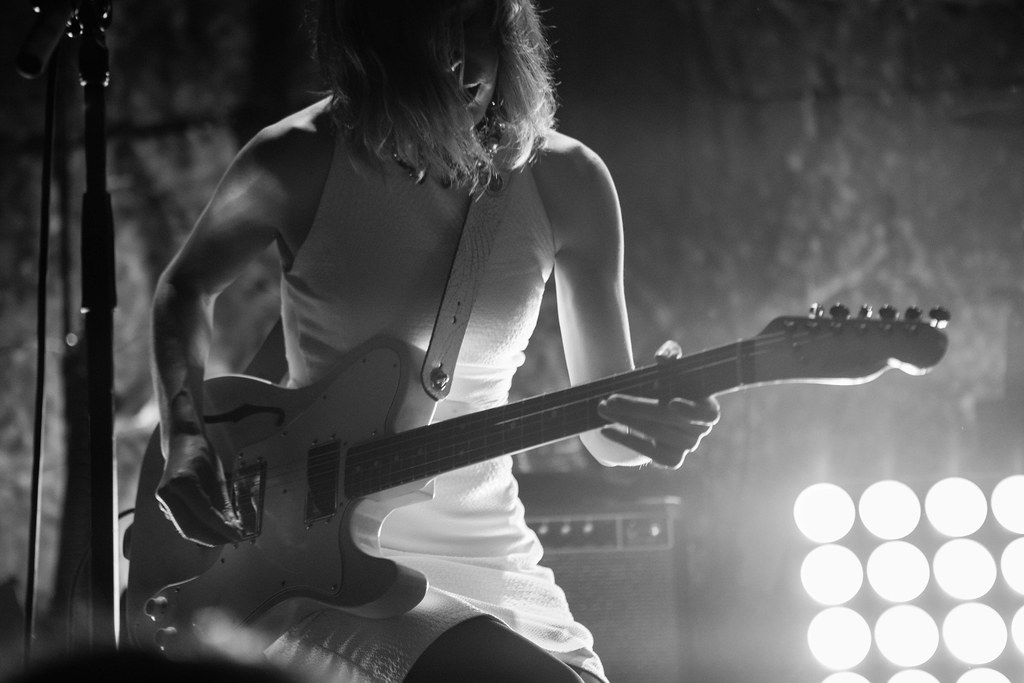 And then there were all the other lenses through which to see it. For the activism, you’d remember it for Lizzo’s candid moments of mixing pan-civil harmony — “I’m a humanist” — with concrete and poignant commentary: “Black lives matter.” Maybe a few goose bumps from the preacher’s rhythm in which Sleater-Kinney vocalist/guitarist Corin Tucker shouted out tour-collaborator Planned Parenthood, growing all the more impassioned. “Give me a choice! Give me equality! Gimme love!” And then put her voice like a battering ram through the gates of “Gimme Love.”

If you’re a politically platonic Sleater-Kinney fan (what a small, strange membership that must be), you might have just walked away thinking you’d just seen a band rocket out of epochal thinking, extend its prime and appear to you at its absolute peak. 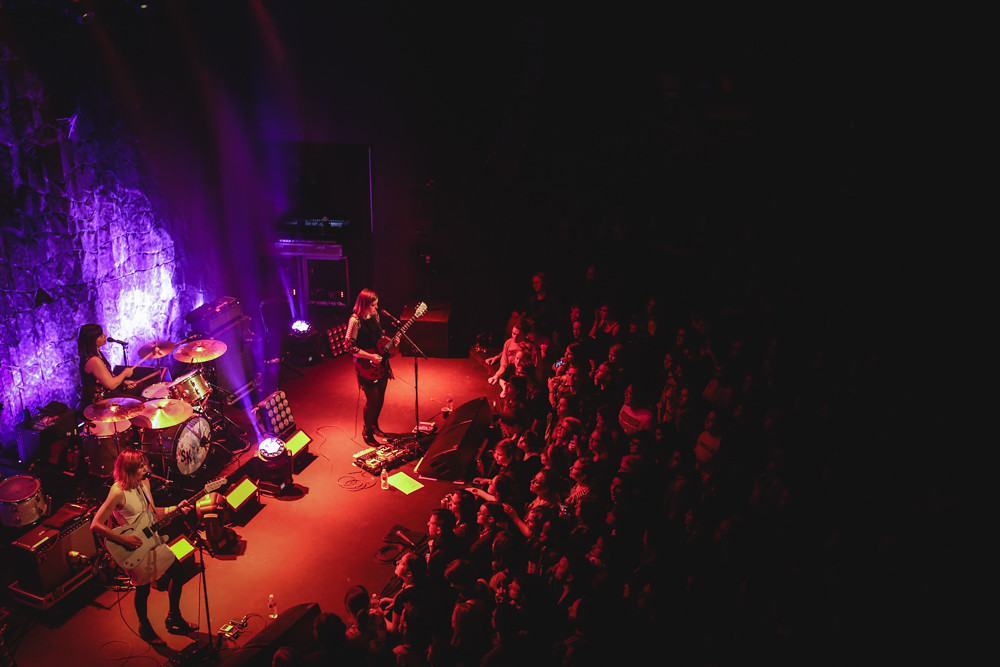 The brilliant table-setting of Friday night’s show presumably started months and months ago when the band elected to play a small standing room when they probably could’ve sold another few hundred tickets to play, say, Sokol Auditorium or something that size. The show sold out in late October.

The stage backdrop reflected Sleater-Kinney’s simplicity, something that looked like a canvas of gray bed sheets hole-punched and shredded. Occasionally, its ribbons blew upward, buffeted by the gale-force vibrancy that came off the band.

And then, No Cities To Love, Sleater-Kinney’s first album in nearly a decade, released Jan. 20 on Sub Pop, is a firework of relevance. It swings with a clean and beautiful sound. It punches with the band’s most complex arrangements to date. The album is a crackling thesis for where Sleater-Kinney, an influential, riot grrrl band, born in 1994, is today. What they stand for, don’t stand for, can’t stand for in 2015.

The “can’t” mostly has to do with naivety, not the band’s, but someone’s mis-assumed version of how bluntly a 20-year-old punk band might attack the issues. On No Cities To Love, there’s stirring intelligence in the lyricism that hardly comes from a band in vacuum-filled extension of its heyday.

That cunning is partially in the miniscule negative space of their performance, 23 songs in about 90 minutes, and only a few pockets of talking — which included some nice words for Omaha. (Which Tucker said through the first few songs had been the best backing singers of Sleater-Kinney’s tour).

“We never really checked. We never checked the price tag,” Tucker’s voice scaled the ceiling of the Slowdown in the first minute of their performance. “Price Tag,” the opening track on No Cities To Love, is a song seemingly about cost, consumerism and placation, and it’s done with tonal eloquence. Like the kid who didn’t really check if the back door was locked when the dog got out. Or, “Did you read the fine print of the corporate contract? … I guess we never really checked…”

Then, came the also-new and ironically titled “Fangless,” which sounds like it could shatter skeletons head-to-toe if it wanted. Then, the predictable, first-old-song cheer for 2002’s “Oh!” And not for aesthetically insignificant reasons. To the extent that vitriolic and mock-pop whine are a hallmark of Sleater-Kinney’s earlier work, “Oh!” saw Brownstein’s side-winding voice winning those airtight three minutes. 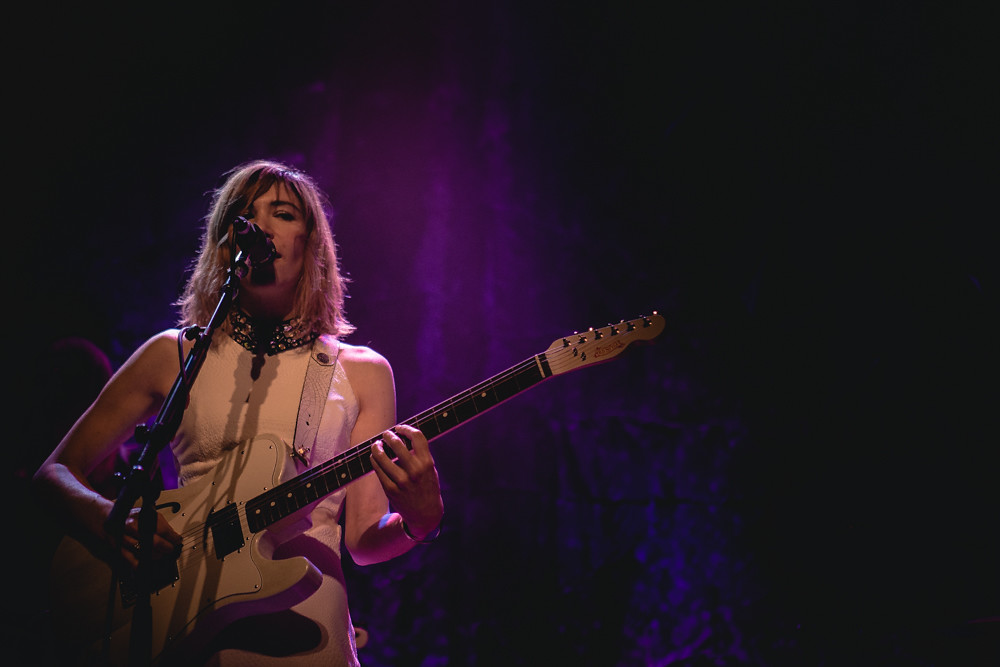 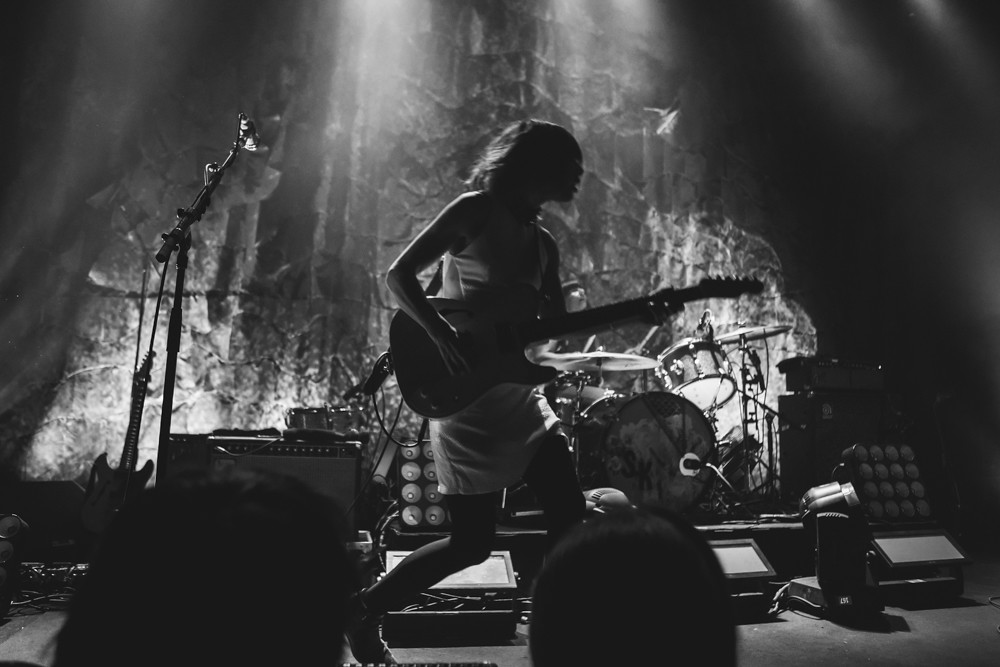 This is where, if you like, you could enumerate the successes for Friday’s show song-by-song  in terms of technical and stylistic appreciation. Just like on the album, Brownstein fingers slid sprucely around her frets, displaying incredible restraint in the guitar tone: full, but like it’s coming from the next room. And the guitar parts always seem to invite the listener into that distant space, but you never arrive. That other room lacks her taste.

“O2” featured the same rageful round as on 2002’s One Beat. Drummer Janet Weiss elevated the jumping crowd to new heights during the drum solos of “Bury Our Friends.” 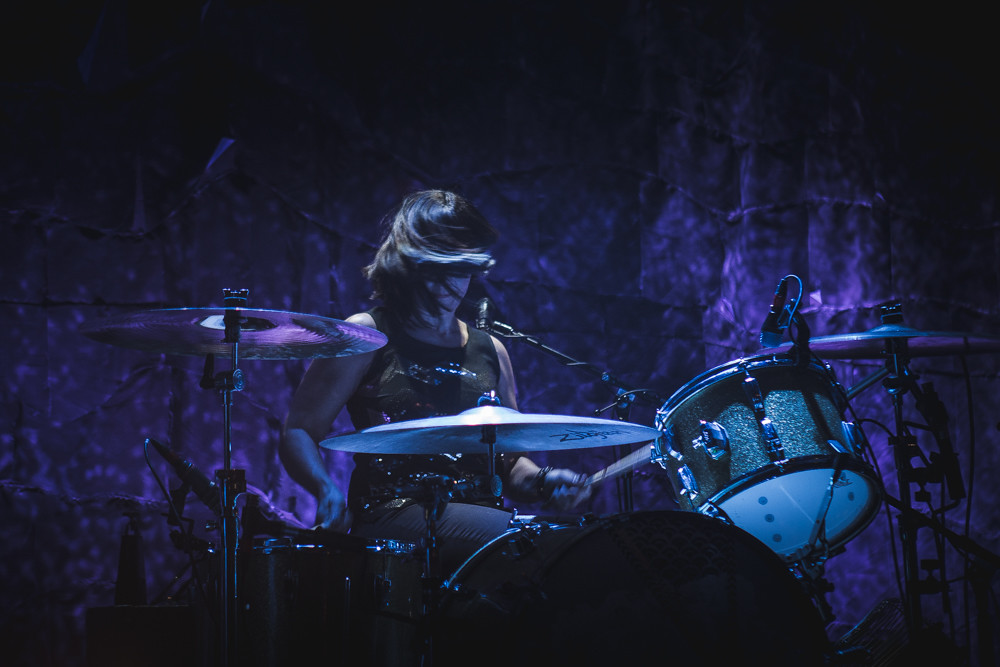 Mostly, Sleater-Kinney’s songwriting prowess showed up in the near-constant reboots of energy across the setlist. Every song begins written keenly in a certain corner. It’s crisp design set to a certain terrain: thumping drums, a solitary riff, a howling vocal line off by itself. All exciting for how the crowd seemed magnetized to the individual parts, the parts that within seconds, each time, would become Sleater-Kinney.

Watching Corin Tucker sing is like watching Whitney Houston or Eddie Vedder or Stevie Nicks sing but with no degeneration to speak of. It emanates from the profound feeling that stretching her voice, forehead to sternum, was the thing she was most meant to do in her life. It’s effortless in how effortful it is. Clearly, she’s trying, but trying the way Zach LaVine won the Slam Dunk Contest on Saturday night. Yes, you had to jump four feet or two octaves, but is it really that easy? With watching it comes a pristine feeling: People with that kind of conventional talent — though Tucker has chosen a writing career of using it unconventionally — are so often only accessible through stadiums and VH1 and lists of the 100 greatest YouTube live performances. Proportional to those options, Friday was her playing a living room show for just you. 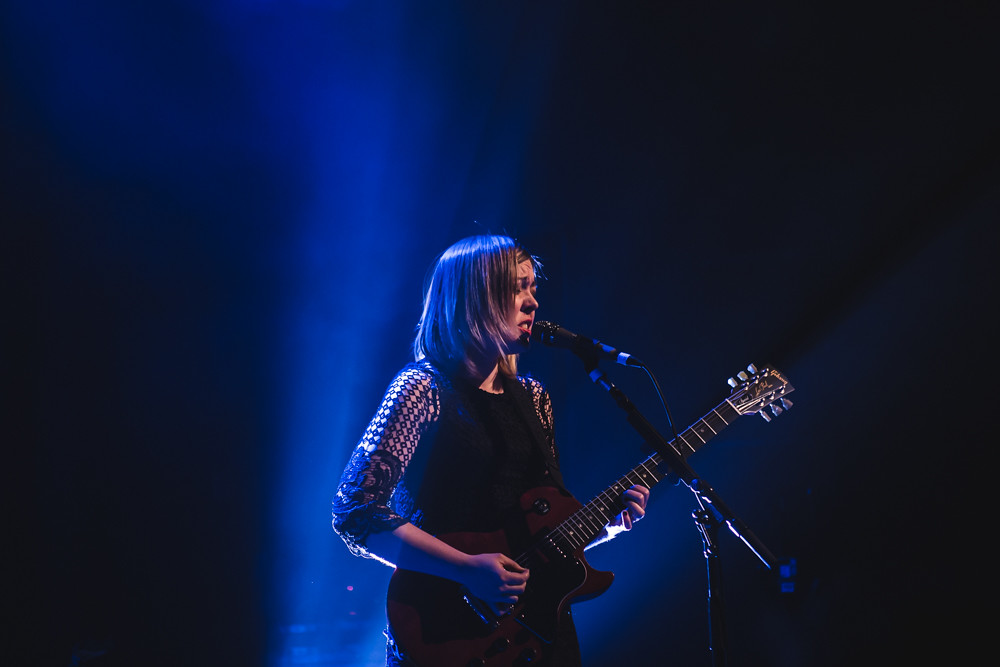 It’s a voice of authority as it ever was, but now the kind that tells you in a counterintuitively anthemic way that the new songs are not for banner-waving.

I’m not the anthem, I once was an anthem
That sang the song of me
But now there are no anthems
All I can hear is the echo and the ring

Anthems lose their steam when the world acknowledges their issues have more corollaries, subheadings and contexts than a singalong can muster.

This was Lizzo’s place in the night, a confirmation that Slowdown was a space in which more than just the Sleater-Kinney voice bore legitimacy. More specifically, it was a tacit acknowledgement that the biggest issues of our day involve race and, thus, hip-hop is a crucial discourse.

The Minneapolis vocalist’s command over the venue was apparent from the first moment when the Star Wars “Imperial March” foreshadowed her arrival on stage.

In the most absolutely superficial way, she hyped the crowd for Sleater-Kinney. But in a better way, that makes that first way seem idiotic, she was another channel of musical conversation. She was more vulnerable, funnier, more open, and free to say the things about sexuality, race and conviction that 20 years of exposure to the music press stops a band from rambling about between songs. It’s understandable. But Lizzo did it with aplomb.

Lizzo hyping the crowd before Sleater-Kinney.

With drummer Ryan McMahon and DJ Sophia Eris at her side, Lizzo brandished a born-performative look, conjuring the crowd — that she also cordially admitted probably didn’t know her because of how early the show sold out — into singalong on “Paris.” It’s a track that acknowledges myth and groundedness. “Have you ever been to Paris at night? Neither have I, neither have I.” By the end, most of the crowd accompanied her on the chorus.

Across that song, and other highlights, including “Bus Passes And Happy Meals,” “Batches & Cookies” and “Hot Dish,” she showed a terrific and unequivocal knack for speed-rapping and some truly funny asides (much in the same way she bantered with the crowd). And let’s not omit the from-the-diaphragm singing parts that broke into pure vocal gravel when she lost herself in the aggression of the songs.

In some ways, it was perfect, another artist with political intention, but aware those intentions are not infallible where people come to see shows. “Black lives matter.” And the crowd rightfully cheered. “Let me have my Aerosmith moment,” with a bit of tongue and cheek. Cheer for that, too.

About six minutes into a live NPR interview Sleater-Kinney did with the comedy duo Broad City earlier this year, Carrie Brownstein abruptly articulated what the band has stood for since its inception. “An unapologetic obliteration of the sacred.”

But then Broad City’s Ilana Glazer counters in an instant: “It feels like that’s more sacred than whatever you’re supposedly obliterating.”

It’s a moment of profundity in an interview that ranges from the confessional to the career-plunging to the mundane to the goofy.

For all you can seemingly say about this band, they seem deliberate about representing only themselves. Because representations are lost to phylum of decades and movements that other people get to define. Representations get steered into advertising. They get used to say things they never set out to say.

Instead, the band simply and visibly tries to be the best a two-decade-old band can be. Write the most interesting music of your career. Talk politics in the most concise and nuanced way you can. Book an artist like Lizzo to open for you, to give your night the feeling that you’re not the end-all-be-all of social commentary, of music or of culture.

From the punchy mantras to the hidden asides, Sleater-Kinney gives every reason to think that its new album, and its performance on any given night, is about the band. Which seems both novel and orthodox. “Surface Envy,” Tucker said on Friday, is what it feels like to be in the band again.

The chorus: “We win, we lose, only together do we break the rules.” 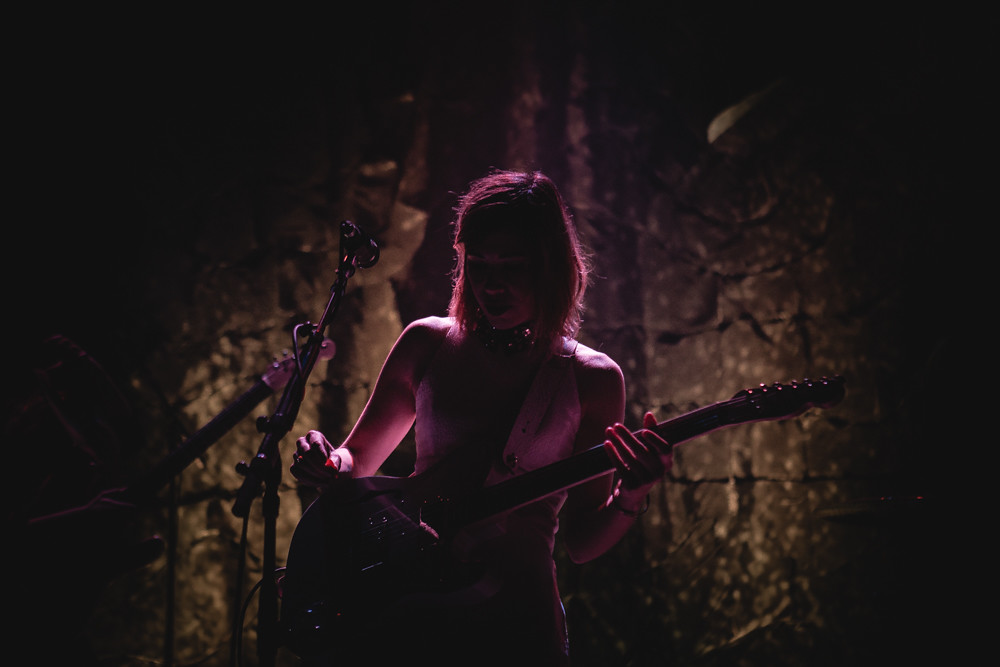 In the song that induced the crowd’s most sustained leaping frenzy of the night, Sleater-Kinney played “I Wanna Be Your Joey Ramone” in the encore. The lynchpin lyric in the 1996 song — “I’m the queen of rock ‘n’ roll” — flew out with a grin and grain of salt.

Right then, I couldn’t help but think of U2’s bombastic “The Miracle (of Joey Ramone).” That’s another band — however unsuccessfully and after much longer — outlasting its contemporaries and trying to push into a new stage.

“I wanted to be the melody above all the noise,” Bono cries on the 2014 Songs of Innocence single, and without a hint of irony. It’s a song supposedly about a young Bono, as remembered by old Bono, experiencing a Ramones concert. It’s like a Joycean epiphany without the come-down.

In 2015, Joey Ramone can mean anything, nothing. Your Joey Ramone, though, invokes the hard space between blurry humanity and bedroom poster heroes.

For the vast majority of us — for Sleater-Kinney — there is no world above all the noise. There’s no Planned Parenthood in that world. In that fantasy land, there’s no struggling people who could use a voice as titanic as Corin Tucker’s to magnify the small, hungry one they might hear as their own. 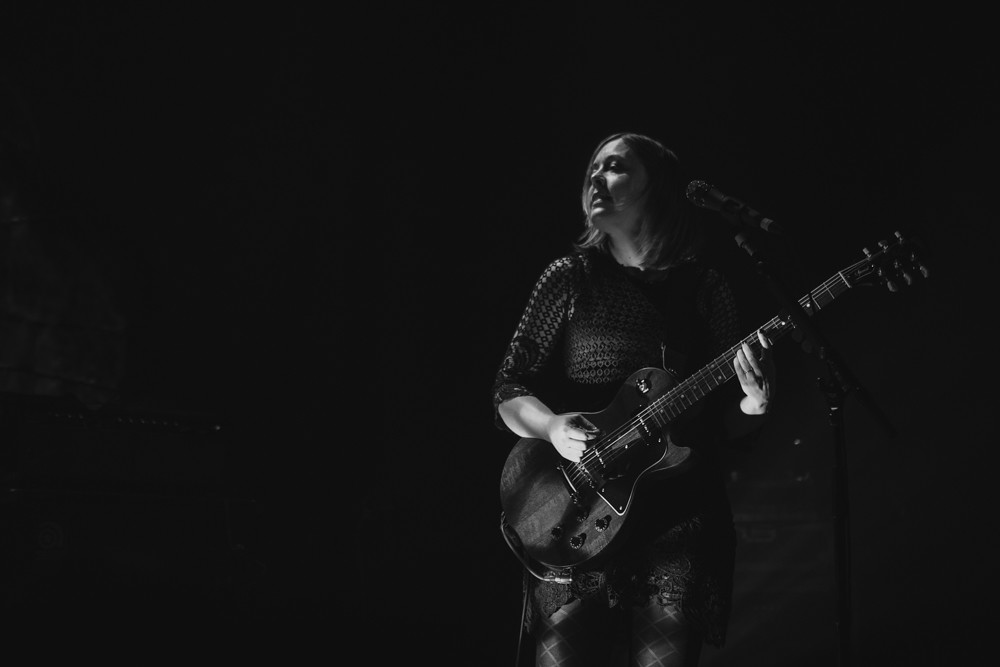 Everyday life is cacophony, cheap and enjoyable talk, damaging and unexpected subliminals. You can wait years for the people, the bands with the best noise to cut through the fray. To tell you with a veteran scream that everything will be all right. Or to tell you, tough shit, it won’t be. Love is noise, too.