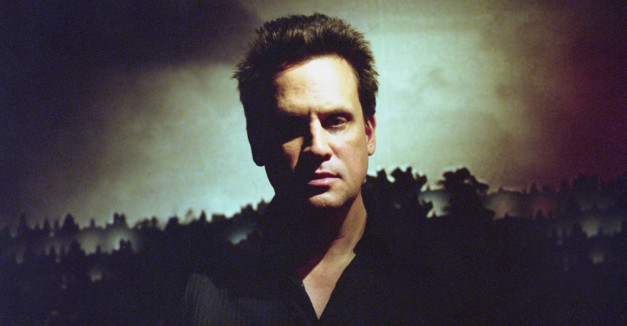 Editor’s Note: Photographs (and phones, in general) were strictly prohibited at last night’s Mark Kozelek show. So apologies for the press photo you’ve probably seen before.

Death is a good hook.

The finale, the fixed point at the end of all our trajectories: death has had our attention for as long as there’ve been people. And if Mark Kozelek’s music does anything, it reminds us we will die — tragically, alone and often by chances so improbable as to echo for generations to come.

Since his career began with Red House Painters in the early ‘90s, Kozelek has released more than 30 records, EPs, solo ventures and Christmas collections, and through that he has seen the world over, twice. Of that massive discography, some of which even turned into a book of poetry, the newly 48-year-old opened his first ever show in Lincoln with the expositional “Hey You Bastards, I’m Still Here,” slugging into the first lines on a solitary base drum.

Kozelek had requested seating prior to performing and that all phones be shut off, barring photography. It was to be an intimate night, and for a man whose music serves as a vehicle for confession, for personal essay in the form of verse, nothing could be closer to the truth.

He towered on Vega’s black stage above the seated audience, one hand in his pocket, eyes closed and skin bathed in a pale red light that cast a shadow of his figure on the back wall. Kozelek hounded the drum with his other hand and shouting starkly into room, “When I was a kid I read the satanic bible.” He continued through the song to explain first, how he happened to meet Anton LaVey, the founder of the Church of Satan and then how Kozelek was later invited to the man’s home.

Conveniently, obviously, piquantly, however you look at it, LaVey dies a few months later.

It was only a matter of time before the bodycount in Lincoln began to rise. Kozelek’s latest album under Sun Kil Moon, Benji, of which he played the majority, features a death (or in many cases, several) on nearly every song. It is a subject that with each release has taken further purchase in the middle-aged man’s psyche. In younger years, Kozelek’s preoccupations were with women, relationships and, more to the point, their varied and melancholy ends. Now, we get the sense that his own end looms large for Kozelek as his songs and stage banter reflect an increasing interest in moments of passage: time and all the instances his life has been touched by the loss of another.

Between songs the mood was playful and full of mock-indignation as Kozelek recalled touring stories and teased audience members for talking or not knowing the names of boxers. “Shut. Up.” He repeated it in disbelief at a persistent chatter. “This (song’s) important. There’s a lot of words for me to remember.”

Some in attendance carried their favorite albums of Kozelek’s with hopes of signing, and one person even gave the singer an album between songs: They Only Come Out at Night by the Edgar Winter Group. It was a gag gift for those aware of the reference on the Benji track, “I Love My Dad,” and the gift kicked off a story from Kozelek about the song, which had the crowd roaring.

But overall, the emphasis was on used-to-be’s and the difference between the way things are now. Kozelek talked about his audience — mainly middle-aged dudes — and how it was once full of girls. “It sucks,” he said, before starting a story about a recent show he’d been to where the audience was “like an old folks’ home.”

(My classification of Sun Kil Moon as “Dadcore” was confirmed when I asked a girl next to me how long she’d been a fan. “My dad bought me a ticket,” she said. “But I know what I’m getting myself into.” Kozelek also spent time between songs to cast the Internet and writers thereon in a villainous caricature.)

Kozelek’s humor, an aspect of the artist almost entirely undetectable on his recordings, shone through the morose atmosphere of his music, though, and the performance was all-together a testament to the man’s career. After playing a cover of Modest Mouse’s “Tiny Cities Made of Ashes,” someone yelled from the crowd, “Got more Modest coming?” to which Kozelek replied, “You got a girlfriend?”

When Kozelek moved into his second song, “Micheline,” he performed without guitar or drum, ambling back and forth on stage and allowing his vocal chords a moment of isolation usually complicated by his string-work. The minimalism on display has always been a tenet of Sun Kil Moon records and Kozelek’s solo work, but stripped of a band, the music was brought to its core and purified, a distillation into something sharp and entirely arresting. Kozelek’s voice, known for its capacity to drone, became explosive and demanding. While at festivals and other venues he has stated being comfortable as wallpaper, at Vega, looking away was not an option.

The set was a rising and a falling, a building of tension and intensity and then dissipation. It began more like abstract performance art as he shouted and cracked his voice deliberately with the lone drum, spit misting out from the microphone in a bright haze. By the third song when his signature nylon-stringed guitar actually made it out, Kozelek had breached the realm of experimental. (For several songs in the middle, Vega owner and Lincoln musician Eli Mardock joined Kozelek on stage to play simple versions of the albums’ drumwork, a move that gave the show a chaptered sense of tone.) When Kozelek offered a new single, “Possum,” he took it another step, explaining that his new record takes on spoken word segments, further aligning his work with performance poetry.

The new song mirrors the structure of the overall set, carrying itself on a soft flutter of notes (and a story about a dead possum), which shortly transitions into a thrashing bout of shouts and gnashing guitar (as he tells another story about going to a Godflesh concert). The song quiets down again, into the spoken word and then exits on the tender notes of the beginning, keeping with the show’s variety, too.

On “Possum,” Kozelek sings about aging yet again, considering the animal’s death and his own desire to “walk a last walk, knowing/that I too gave it everything.” And so, as Kozelek exhumes his fears of death and time, he moves his focus yet again, this time to the future, to what he has left to do. At the rate he’s still producing, we can expect several releases, including, Kozelek says, a follow-up to Benji potentially within the year. Though death will most certainly remain a topic for Kozelek, it is not merely a hook for the man, but instead a spur. If last night signifies anything, it’s that he’s not through with this life yet.

Benji and Kozelek’s live show—with their emphasis on tragedy and change—are not expressions of acceptance or of relenting to the ultimate fate. They are together a moment in his life and now ours, an axle on which Kozelek’s music seems poised to turn and on which we, if we choose, can also place ourselves.

Death is a good hook, but, in Kozelek’s case, it makes a better stepping stone.