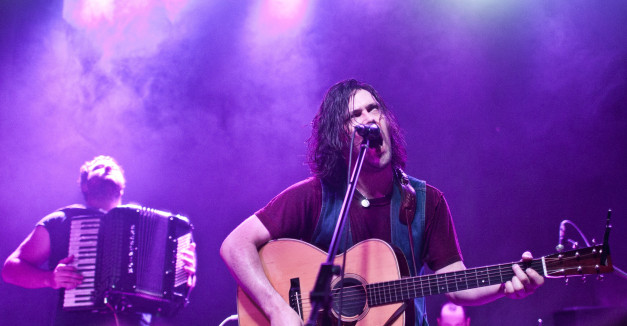 Conor Oberst never was the unwitting hero. He is not the divinely gifted somebody at once blessed and cursed by his talent — that talent having created both his livelihood and a legion of fans eager to lift him up on shoulders and make him speak for them.

In a certain context, you get the impression that, while his songwriting is his doing, he never asked to be a prophet, sucked up and swirled around by the pressure of expectation. But that now he is. It’s a theme he returns to in songs like “Soul Singer in a Session Band” from Bright Eyes’ Cassadaga (2007) and “Landlocked Blues” from I’m Wide Awake It’s Morning (2005), among others.

But think about New York City, Oberst’s other home, about which he’s written more movingly and eloquently in the last decade than he ever did Omaha and where, earlier this month, he sold out a show at Music Hall of Williamsburg, just as he did at The Waiting Room on Thursday and Vega on Friday. 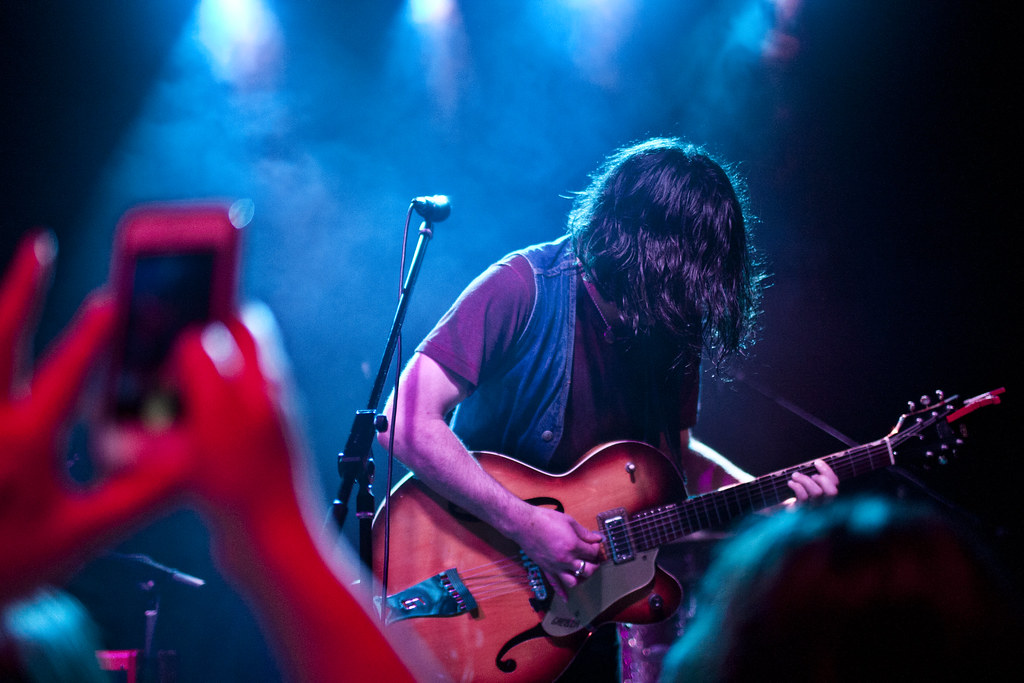 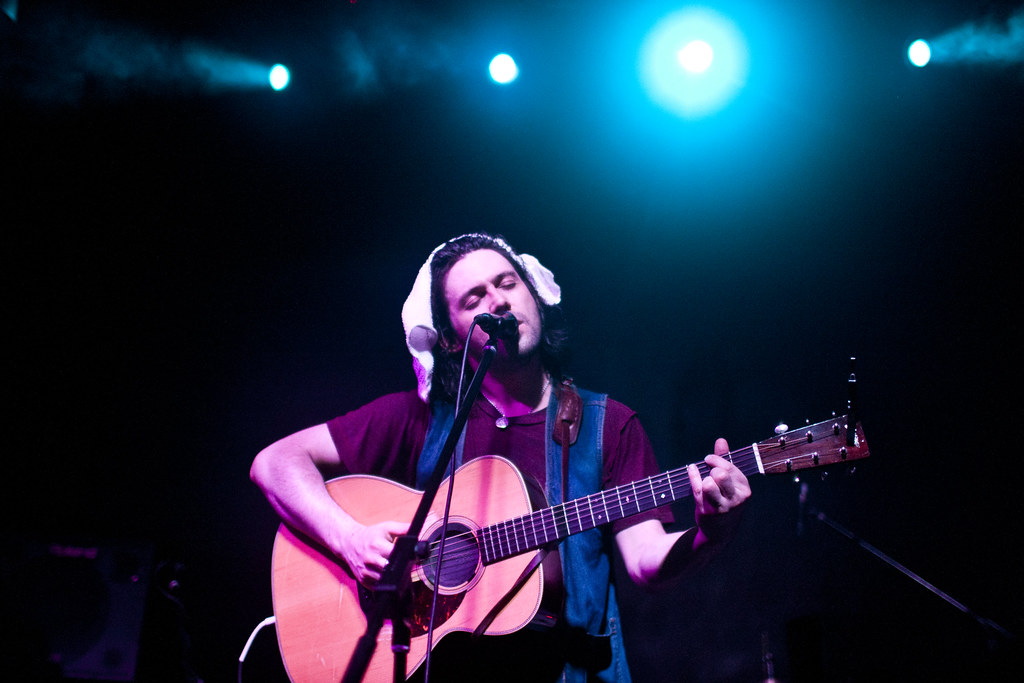 It’s unlikely that the casual, or even dedicated, Brooklynite Oberst fan knows the words to some of the truly crude Bright Eyes songs that appear in places like 1998’s Letting Off the Happiness. They don’t know about Commander Venus or Presto! studios and they’re not searching for local place-and-people references in hours upon hours of early Bright Eyes work. Oberst, the gifted boy who became a voice for disenfranchised young people in a small, conservative midwestern city a whole decade before every midwestern city had a thriving arts scene, is probably not having his personal artistic arc appropriated by adoring fanatics on the east coast.

Admittedly, the local-lore treasure trove is part of the fun of being a Nebraskan Oberst loyalist. But it creates baggage.

You did so much for us, Conor. We love you. Love us back. But he didn’t do any of it for you or me. It’s happy coincidence that his experience turned out to be more-or-less universal among like-minded Nebraskans.

It makes for a dramatic display during live shows, a constantly shifting tension, the burden of responsibility laid alternately at his feet for appearing on stage and his audience’s for demanding his presence. It’s been acted out with such subtlety across Omaha stages over the years that it feels inherent. 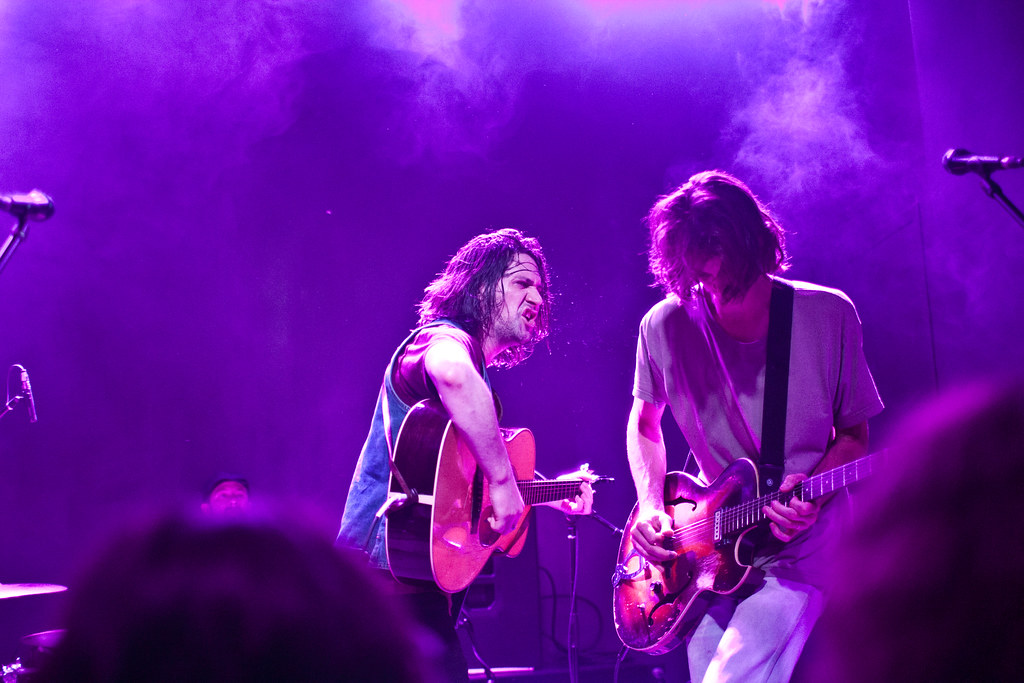 The interplay is easy to love or hate.

So when Oberst takes the stage at Vega in Lincoln on Friday, a mere 60 miles from complicated Omaha, it’s hard to guess whether he’s far enough from the Bright Eyes epicenter to out-distance a sheepishly worshipful fandom. Is Lincoln just an extension of Omaha or will this show be in a different context? The answer made even more difficult to situate by the fact that it’s Oberst’s first show in Lincoln in more than ten years and that over his last few releases, Oberst has become a songwriter on whom it is less possible to pin his own lyrics.

He takes the stage with opener Felice Brothers as his backing band and begins with “Time Forgot” from last year’s sweeping Upside Down Mountain. The album saw Oberst successfully come into his own, shedding myriad labels and assumptions about his work, the so-called Omaha baggage he tried to lesser effect to eschew with two not-as-sharp efforts, Cassadaga and 2011’s The People’s Key.

Gone are critical descriptors like “wunderkind,” qualifiers like “Omaha” and comparisons to Bob Dylan, fittingly replaced by Paul Simon. The Oberst of Upside Down Mountain is more even-tempered, yet no less biting or precise. Call, perhaps, it the perspective of age.

And the Conor Oberst on stage is true to that form. A master at crafting set lists, the tentatively sunny “Time Forgot” gives way to the road-rolicking “Hundreds of Ways.” Through the show, Oberst, slight-in-stature, full of presence and confidence, commands a set’s ebb and flow. Song order is careful to never upset natural emotional arcs, but neither does it dig itself into reactionary holes.

I don’t know what Thursday’s Waiting Room show was like, but past Omaha shows as Bright Eyes or Conor Oberst — but notably not Desaparecidos — have often felt like morose obligation. It’s a given that he’ll play Omaha at some point on any tour, but it’s the audience that won’t let him forget it’s a homecoming.

At Vega, Oberst landed closer to seasoned professional. He’s here because it’s his job. But it’s a job at which he’s gotten extremely good and he seems to enjoy, or at least be comfortable with it. 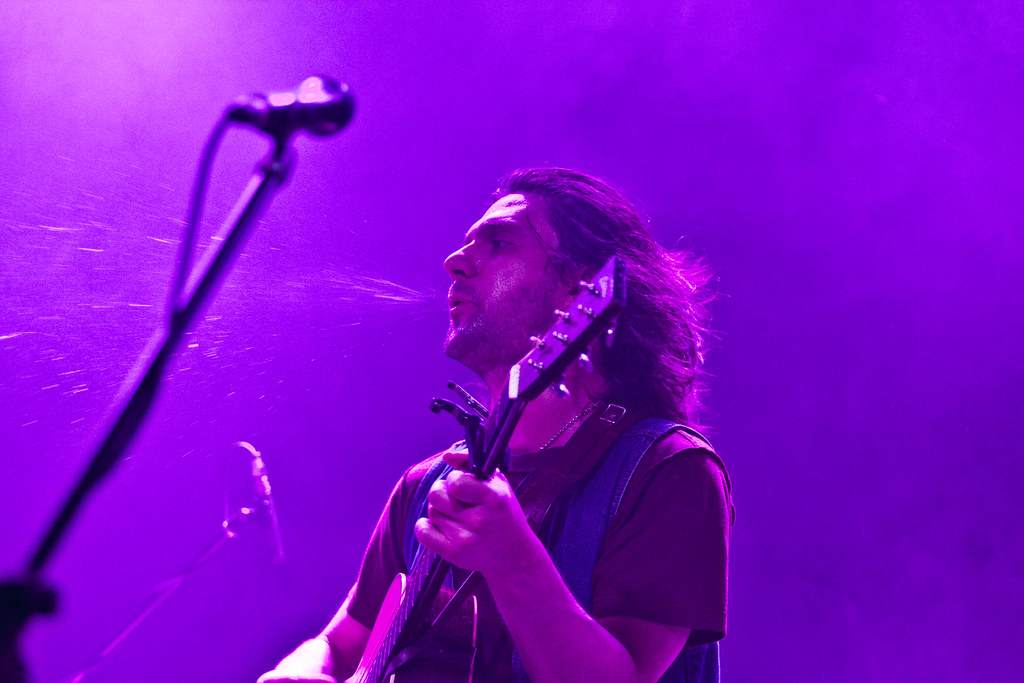 The New York-based Felice Brothers open the show, churning out contemporary interpretations of classic folk and country tropes — simple story-songs wrought with heartbreak, whiskey and unsavory characters. The band is at its best when brothers Ian and James, guitarist and accordion, respectively, share vocal duties.

Fan favorite “Frankie’s Gun!” and “Whiskey in My Whiskey,” which, was played, gratefully, an octave higher and in double-time compared to the recorded version, prove the most effective at hitting on the simple exuberance of howling to swing beats. It’s an appropriate opener for Conor Oberst, like the band he might be in if he had gone all-in on what drew those early Dylan comparisons. 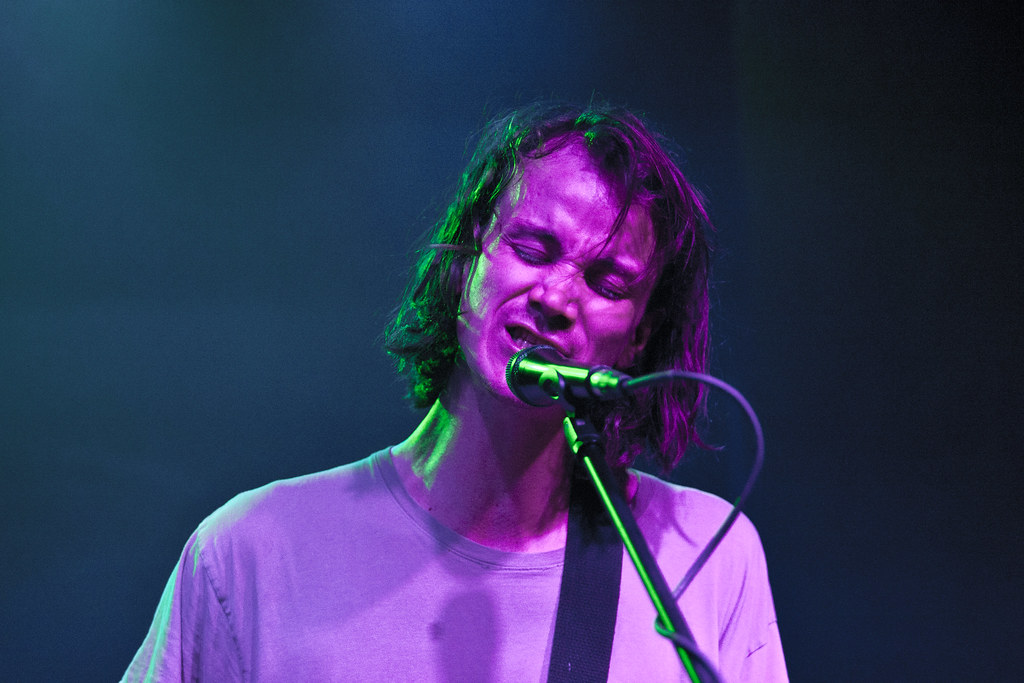 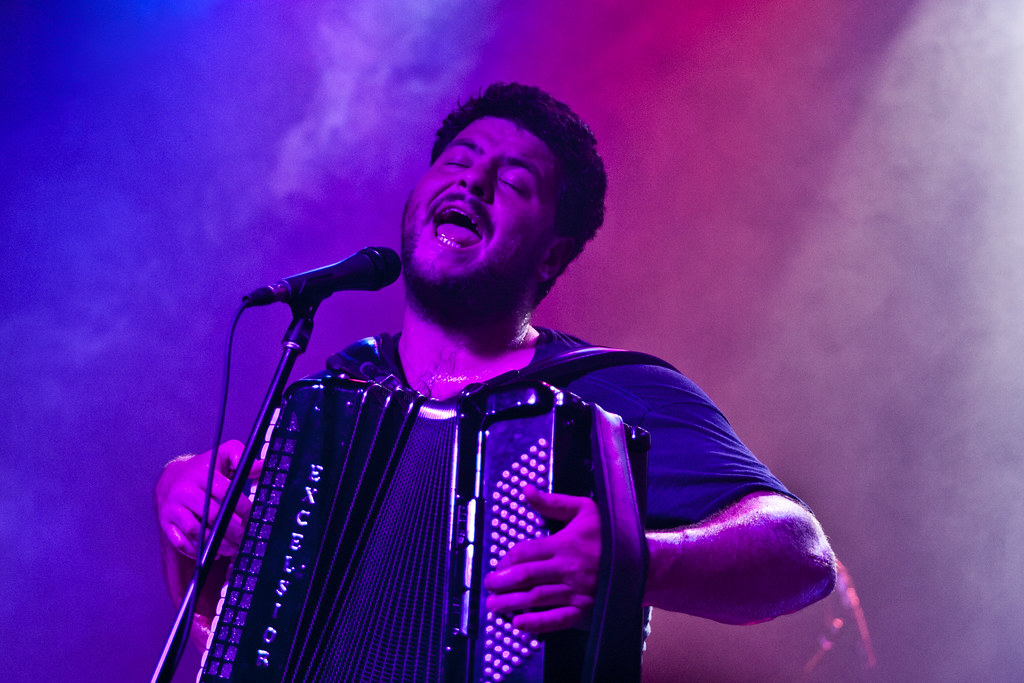 The Oberst-faithful are still out on this night. According to a staffer, it’s supposedly the only show in Vega’s still-young run to ever sell out before the date and a line is forming at the door of the Railyard venue around 8:30 p.m. Through the set “I love you Conor”s and requests for dusty Bright Eyes songs do crop up, but they don’t hang in the air like a selfish wish for the artist-as-idea over the artist-as-person.

Oberst’s set both rolls over and indulges these kinds of comments. The first Bright Eyes callback comes early with “Four Winds,” The Felice Brothers’ fiddler Greg Farley seeming grateful to play the iconic intro to the iconic folk song. Through the 22-song set, “Poison Oak,” “Method Acting,” “Soul Singer in a Session Band,” “Easy, Lucky, Free” and even “An Attempt to Tip The Scales” from the 15 years-old Fevers and Mirrors get a turn.

And while each track functions, at least on some level, as a kind of fan service, these Bright Eyes tracks are cherry-picked.

Oberst is at his best seamlessly blending personal and political narratives and commentary. It’s why, generally, 2002’s Lifted overshadows Fevers and Mirrors, why I’m Wide Awake It’s Morning stands as the pinnacle Bright Eyes work, even over the later albums. In that sense, Upside Down Mountain is a triumph for Oberst. His Friday night Bright Eyes selections are almost entirely in that tradition, as if to draw out the route of his professional ascent.

Except for “Southern State.” It’s nearly as rare as a Bright Eyes track can get, having been released on a split with Spoon’s Brit Daniel in 2002. But, as Oberst tells the audience, it’s about a college town. This one is Athens, specifically, but the idea is that college town templates are largely the same. Oberst played it in Omaha the night before, but its lyrics probably punch harder in Lincoln than anywhere else on the brief tour:

“But you’re still hanging around that college town, with your new life, your new lover you found. And you are keeping her up at night, bringing her down. She’ll watch you drink yourself to death but won’t ask you ‘Is this really what you want?’”

Through a handful of tracks released with Mystic Valley band, including “Ten Women,” “Lenders in the Temple” and “Cape Canaveral,” Oberst has nothing more to say about Lincoln until he opens up about recording in town.

“I used to spend a lot of time here in my late teens making records down the road. Every day I’d go to Yia Yia’s for lunch. And every day, like clockwork, some guy would call me a faggot out his car window.”

The remark elicits practically no reaction. Lincoln audiences aren’t used to this routine. Are you making a joke? Airing a grievance? Condemning our town? Trying to relate?

No matter how it was intended or how it was received, the comment is ultimately a small pothole on an otherwise well-paved blacktop. Just as requests for songs that are long gone from Oberst’s repertoire don’t hang in the air, neither does this. The audience at Vega doesn’t expect Oberst to be a certain kind of person, to stand as representative. 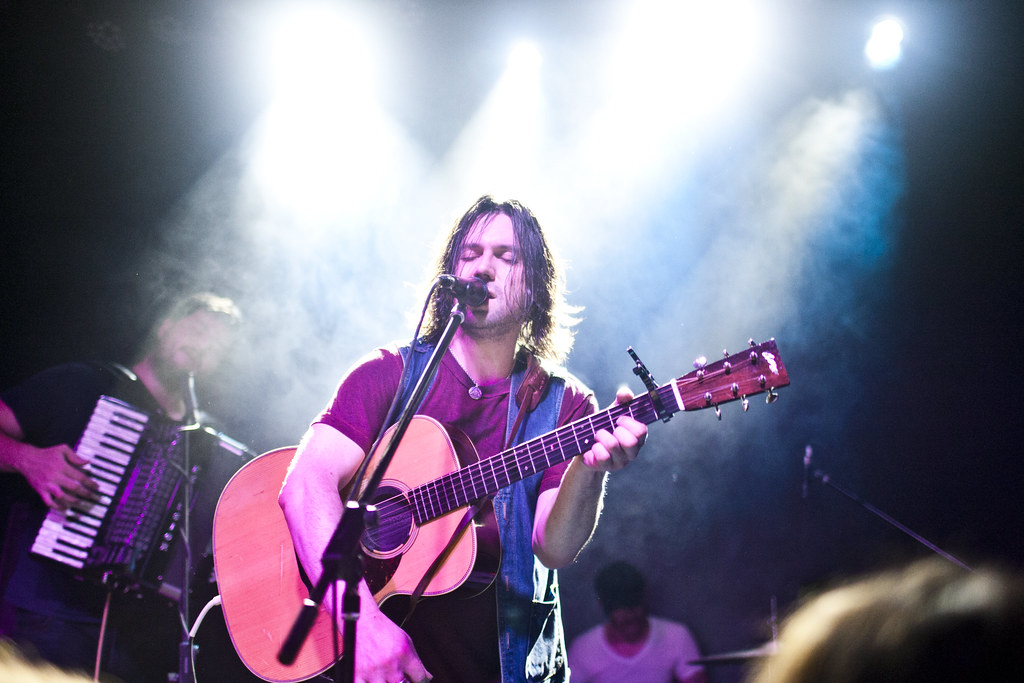 Having not been there, I won’t say he didn’t have the same reception in Omaha the night before. So chalk it up to Oberst and professional growth that he can play a place like Lincoln, which plays a small part in his history, for the first time in more than a decade, and come not as the hero or prophet he’s often been made out to be in these parts.

Maybe this is what it looks like when your spokespeople move on. When what they’re speaking about is no longer exclusively yours, the idea that they were ever your mouthpiece begins to fade. In this case, for the better.

On Friday night, he’s here just as any other artist with nearly 20 years of work under his belt.