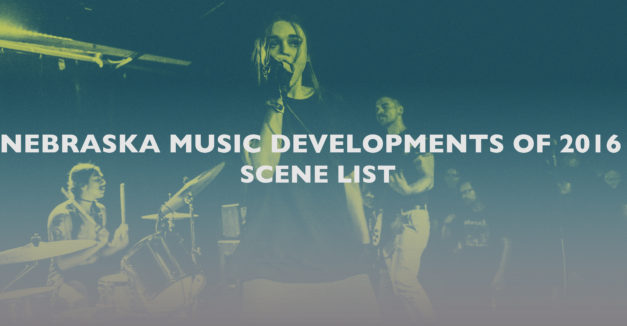 To help assess the year in music, we asked more than a dozens musicians, journalists and scene figures for their favorite albums, songs, shows and events of the year. Today, they give their individual takes on the most important developments for Nebraska music in 2016, from emerging businesses and venues to alternative and DIY spaces to efforts by some to make Nebraska music safer and more inclusive.

Read their responses below, and check out more from our 2016 year in review here.

I’m not sure this was ever a thing in the past, but the development of DIY forums to help talk about issues and balance within the scene is so important. We’ve been able to discuss accountability, what to do when faced with sexual assault, and more. With the impending doom of our presidential administration and the blatant racism coming out of the woodwork, I’m hoping these forums continue into 2017 so we’re all on the same page with how to deal with tough situations within our community.

So much to pick from. Seeing Maha grow and grow is hugely exciting, The BAY opening a venue was cool, Milk Run’s new management is great, and obviously HN is doing super cool work now and is expanding in excellent and exciting ways.

My answer, though, is a tad bit different. I think Ground Floor Guitar in Blackstone has been my favorite musical development in Nebraska. In my opinion, Josh Soto brought exactly what Omaha needed by opening a small, local guitar shop with interesting, high-quality gear at a fair price for the community to enjoy. His equipment is great, the staff is excellent and it’s just a cool place to hang out and make music. Not to mention the rehearsal space, which has even enabled me personally to finally get together with my friends and make rock and roll. Good on Josh and the GFG crew for opening that. (Honorable mention for me is New Generation Music Festival. I was bummed I couldn’t go but I think it was a really cool and ambitious project.)

Hmmmm, probably Ground Floor guitars opening up. So nice to be able to buy guitar strings/whatever and not have to drive to fucking Guitar Center. Love those folks.

In general, It’s awesome to see the Lincoln music community have more places to play. The Bay has a brand new [stage] and one of the best coffee shops in town on top of it being an awesome venue. The Commons is a safe and great all ages place to see shows. 1867 has been having some awesome shows and is very Nebraska-music-geared. 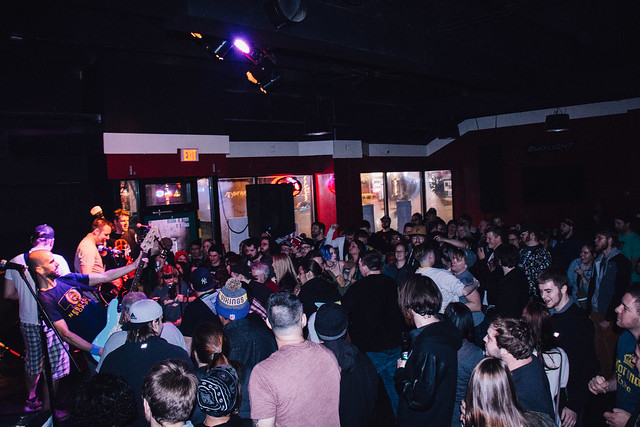 The JV Allstars at 1867 Bar | photo by Tarah Dawdy

The creation and experience of CHURCH and and the creation of GOODGOSPEL. Finding a Home and creating a haven for the Hip-Hop Community of Lincoln was monumental,and pivotal in the shift of momentum in the Hip-Hop scene here.

Good Gospel at CHURCH in Lincoln, Neb., on April 22, 2016. Photo by Andrew Dickinson for Hear Nebraska

It was really cool to see bands respond politically this year and rally behind certain causes (Planned Parenthood, toy drives, etc.) There’s been a bunch of benefit shows, it’s great to see all kinds of bands get together.

I loved seeing both Hi-Fi House and Milk Run become more regular names both in conversation and in becoming hosts for shows and concerts. I’ve gotten to a point where it takes a lot of strength and energy for me to go to big shows. I’ve grown somewhat nervous in large crowds. I love the small, intimate shows that these venues put on because I can avoid the large crowds and I’ve felt such connections with the groups that I’ve seen there.

It’s been cool to watch the Lookout [Lounge] come into its own. It’s old friends of mine who all were involved in the Cog in one way or another. A lot of people that I hadn’t seen or communicated with much over the years, despite everyone being in the same town, and I regret that. 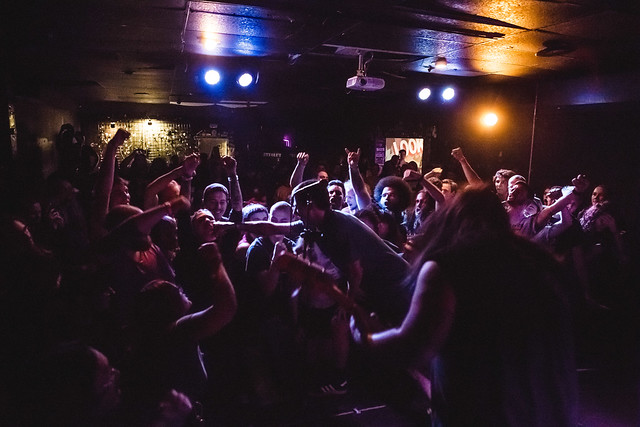 Maybe not a development, but I like seeing a small, intimate place like The Milk Run being supported. They host some awesome, talented musicians, local and national. I saw locals Anna McClellan and Thick Paint open for Baltimore band Outer Spaces in June, and it was incredible.

Seeing/working a show at the 40th Street Theater.  What an amazing and beautiful new space in town run by beautiful people. 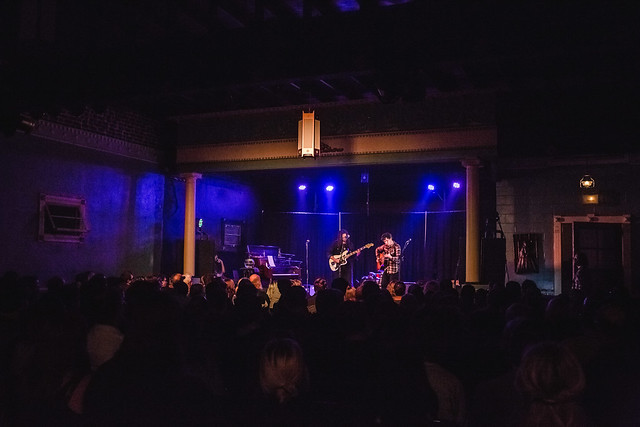 I think Hear Nebraska did a tremendous job of upping the legitimacy and professionalism of Lincoln Calling. Sweet lineup, great promotion and from what I hear a pretty good turn out.

My favorite development for music probably is the between the Hi Fi House and what Bird Williams is doing with his Fliye Arts program reaching kids and getting into schools. That’s key!

Again this is really hard for me. I think there’s a three-part answer: Lincoln Calling was amazingly well booked and was extremely fun. The addition of The Bay for all ages shows (and The Bay’s concert space in general) and 1867 Bar really expand the possible spaces in and near downtown [Lincoln] that can be utilized for shows and festivals like this. 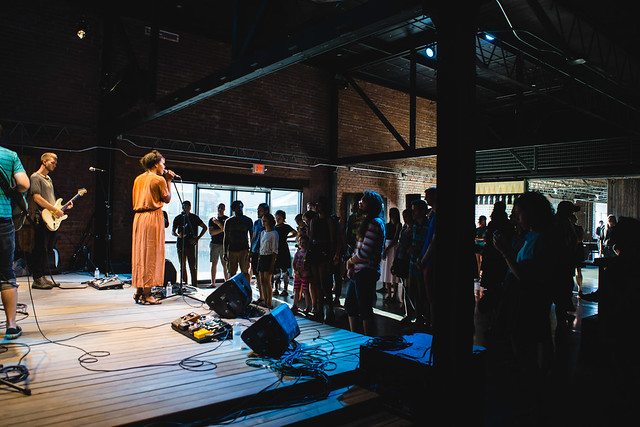 I love the rise of the locally organized, diverse, high-quality festival. Let’s call it a community festival, where you can walk between venues and you’re not ever penned in. I know it’s not the first year for either one, but Femme Fest and Lincoln Calling both knocked my socks off. 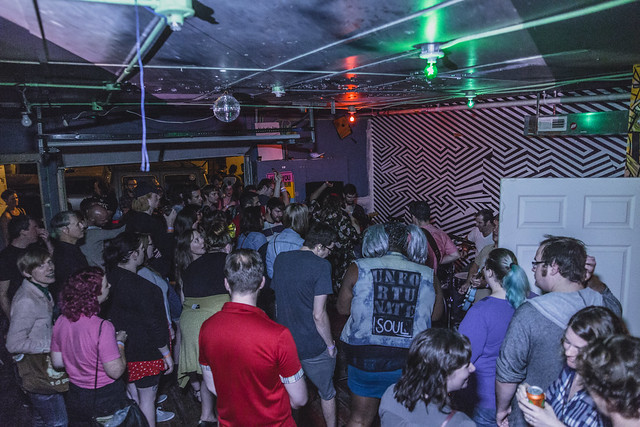 Seems like there’s more venues and promoters popping up. That’s a good thing, and it’s starting to get Lincoln some national attention.

My favorite music development would have to be my Edem Soul Music Project, The Raleigh Science Project, and everything Rebecca Lowry does. Femme Fest is always wonderful!

I got to go to Norfolk with Rothsteen for the Hear Nebraska [Good Living] Tour. What a well organized, well attended, and fun show! Norfolk loved Rothsteen! These Hear Nebraska shows are the most important things happening in the Nebraska music scene. 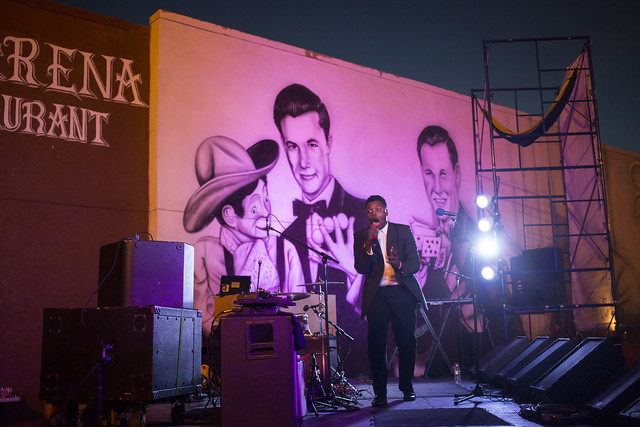 I would like to preface my answer to this by saying I am a straight, white male with an insane amount of privilege, so I may be seeing the progress in better light because I don’t have to live through the many struggles other folks in the scene have to live through.

With that being said: from my limited point of view, while there’s still a very long road ahead of us, I feel like the Nebraska scene made some really great strides towards becoming a more progressive and socially aware environment. Milk Run is now being ran by an all female team, which is so awesome! The Commons makes great strides to be a safe space and to make sure it is 100% inclusive and progressive, I’ve seen countless benefit shows throughout the state and a definite presence from the scene at progressive and peaceful protests between Omaha and Lincoln. There have also been great people working hard to set up the DIY forums to address issues of sexism, racism, and rape culture. A big highlight for me this year was definitely The Hardcore Showcase, there was such an awesome female presence on the stage this year and Planned Parenthood was there offering free STD testing and handing out condoms and information! In a dark year, politically, it’s really nice to see the scene fighting back in whatever way we can and I’m eager to see this progress continue.