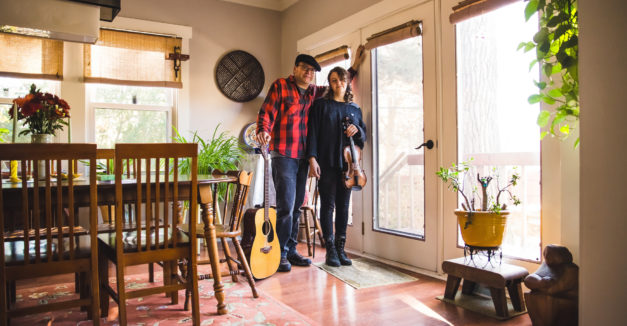 A network of passageways littered with artifacts and untold stories connects the various buildings and partitions above Lincoln’s 9th and O Streets. Using the center atrium, one could find their way around the entire quarter city block, from above now-defunct Knickerbockers all the way east.

Benjamin Kushner ran a pair of pawn shops that operated below them: first, King Dollar Pawn, in the old Recycled Sounds unit; then Royal Pawn just around the corner. The latter store, the larger of the two, had been around since the 1880s before it closed in 2007 and, in addition to amassing literal tons of artifacts, had collected used amplifiers and drum sets.

It was among this vast expanse of dust and clutter that Benjamin and his daughter Marina’s musical relationship began to take shape. Together, they describe a nurturing home environment conducive to her blossoming in any pursuit. They would play silly, made-up games or learn songs together, the father dispensing advice at the daughter’s every request.

It just so happened that Benjamin and Marina shared the same passion.

“It’s an amazing experience to have a child you’re very close with to endeavor in the same area of the arts that you’re interested in,” Benjamin says as the two reminisce one fall afternoon inside a dormant downtown Lincoln venue. “I’ve been surprised over and over, since she was a baby, by things that she does and the way that she thinks.”

Their familial bond at home has now spilled out into music community, intertwining in ways neither of them imagined before. They’ve shared the stage as musicians, the wide grinning Josh Hoyer & Soul Colossal guitarist Benjamin and the bubbly violin player Marina in I Forgot To Love My Father. And they’ve worked together as collaborators, Marina running monitors this summer for the soul band’s Good Living Tour set at McCook.

“It was a very proud moment for me,” Benjamin says. Marina agrees: “I had watched him play so many times. It was exciting to share something that I had been learning with him.”

In the following video interview, the Kushners share their fondest memories of Marina’s musical upbringing and what it means for them to share a slice of the Lincoln music scene.