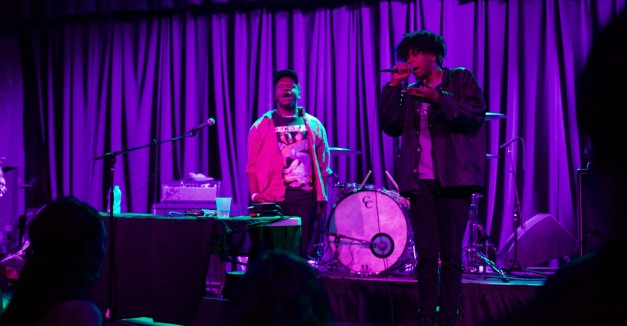 After serving a few months as acting intern, Freakabout lead vocalist Cortney Kirby has assumed booking and promotion duties at Duffy’s Tavern. Kirby had been under the guidance of booking agent Jeremy Buckley since July.

Kirby says she reached out to Buckley after spending most of the last year on the road. She became inundated with requests from fellow touring bands seeking contacts in Lincoln.

“Because of this somewhat overwhelming feeling, I half joking-half totally serious asked Buckley if I could be his intern,” Kirby says. “I think he was surprised.”

One week later, Buckley put her in charge of promotional duties and a few occasional booking gigs, including Lincoln Calling hard rock showcase at Knickerbockers this past Thursday. Prior to her internship role, she worked in venues like The Bourbon and Vega, and booked her own band’s tours. She says the eclectic taste she’s developed as a result will serve her well in her new role.

“I think Duffy’s has something pretty unique about it where you can go to see a roaring rock band one night, a hilarious comedian the next night and then an Americana/folk show the following night,” Kirby says.

The past few months of preparation and training have energized Kirby. She says she’s eager to help bands in need, and help foster the same connections she made on the road, regardless of where they end up playing.

“I’m excited to help these touring and local bands meet each other and have somewhere to play, whether that be at Duffy’s or some other awesome venue in Lincoln,” Kirby says.

The Reader’s Tim McMahan and Wayne Brekke have released their 2015 top band picks, and they feature a plethora of well-known, highly-active area bands.

Nationally touring bands like Desaparecidos, The Good Life, Twinsmith and See Through Dresses are no surprise to see. All have released new music and played with great frequency.

Here’s McMahan on The Reader’s guidelines for choosing its end of year list: “Considerations made in creating the lists were: 1) quality of the bands, 2) activity in the past year, including releasing of new records, touring, etc., 3) impact on the local music scene, 4) performer / band members primarily live in Nebraska.”

We’ll give our takes on 2015 closer to the end of the year. In the meantime, see both Brekke’s and McMahan’s lists in their entireties here and here, and some explanation on the rules from McMahan here.

Speaking of High Up, the Omaha indie/soul band debuted a slow-dancing, crescendoing second single this morning in “You Can’t Give Up On Me.” Lead vocalist Christine Fink’s powerful voice shines over twinkling guitars, uplifting keys and Orenda Fink’s soft backing vocal, begging a lover not to leave during a time of strife.

Hear the debut of “You Can’t Give Up On Me” via Purevolume. Stay tuned to HN later today, as we feature our video interview with High Up, shot as the band recorded at ARC Studios in August

Tonight, The Electroliners, Wagon Blasters, The Lupines and The Michael Saklar Trio play a benefit for Omaha musician Robert Thornton at The Waiting Room. Proceeds from the show will assist the Thornton family with medical bills and other expenses in the wake of Robert’s January surgery and subsequent absence from work. Entry is $10, RSVP here.

Around the corner at Reverb Lounge, Legendary Shack Shakers will play its blend of rockabilly, bluegrass and southern gothic. The Nashville/Paducah, Ky., quartet released its eighth record, The Southern Surreal, in September 11 on Alternative Tentacles Records. Joe Fletcher will open the 9 p.m. show. RSVP here.

Also tonight, Tulsa, Okla., band Nuns plays Slowdown with Long Low Signal and Relax, It’s Science. The band comes to Omaha on a Midwest/shallow South tour, and with LP Opportunities a little more than a year old. The album a swirling indie rock day-dream with shades of psychedelia. RSVP to the 8 p.m. front room show here.