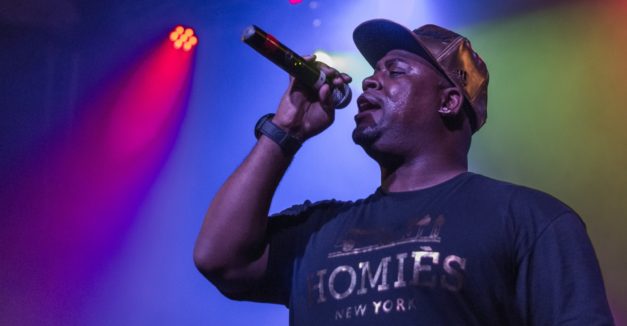 As the holiday season approaches, so to do the opportunities to help people and families in need. That goes for Omaha R&B singer Dominique Morgan’s annual charity event. This year, in lieu of a curated concert, he’s inviting all musicians and community members to join him in giving back a more personal way.

Morgan has a well-earned reputation as a community leader, social activist and advocate for disadvantaged youth, efforts that the Omaha NAACP recognized with its Freedom Fighter award on Nov 4. As the Omaha World-Herald wrote earlier this month, his time in prison has led him to give time and energy to those in similar situations.

Morgan says he chose each organization based on their serving of disadvantaged, grieving or ailing youth. He adds that sending letters and reaching out to kids at NYCF — some of whom he says are serving time “in a harsh environment” for petty offenses — can have a positive impact.

“Monetary donations are great, but a lot of times people miss the personal connections with gifts [and time] they can give,” Morgan says.

Attendees are asking to bring holiday cards and stockings, as well as care-package items with which to stuff them. Morgan recommended hygiene items, candies, gift cards and school supplies.

In the past, Morgan has hosted a “Dom’s Favorite Things” concert, which he started in 2013. Though it enjoyed its biggest turnout yet last year, he wanted to try to get more music community members involved.

“The musicians I know believe in giving back, but I don’t think opportunities are presented in an easy way to people,” Morgan says. “If I could showcase the heart and the amazingness of our local music community, it’s a win win for everybody.”

Hi-Fi House and founder Kate Dussault were eager to get onboard when Morgan approached them.

“The holiday season can be a very lonely time for many, especially those grieving the loss of loved ones.” Dussault says “Sometimes we forget that emotional support is as powerful as financial support and it would do everyone good to take a moment to think of others.”

Conor Oberst and Matt Berninger are renowned for their lyrical talents. The Talkhouse Music Podcast recently got the two together for a one-on-one episode which published earlier this week. The songwriters talk about craft, breaking down songs from their own catalogues: “Lua,” “You Are Your Mother’s Child” and “Artifact #1” on Oberst’s side; “All The Wine,” “Fake Empire” and “Lemonworld” on Berninger’s.

They also discuss their favorite songwriters — paying homage to Leonard Cohen — and Oberst talks about how his new album Ruminations was originally intended to be a demo (to our On The Record podcast team, that is no surprise).

There is a hefty dose of geeking out, but if you’re into that kind of thing, listen to the Talkhouse episode below.

NPR Music filmed Oberst’s recent New York City concert, in which he played through Ruminations in its entirety, for its Front Row series. Former HN visuals editor Nickolai Hammar was part of the video team. Watch it here (or the short version here).

Don’t forget the pre-show in the Underground with Meat Wave, Tenement and Direct Hit! It starts at 5:30 p.m., and is $5 with a NOFX ticket, $10 general admission. RSVP here.

Also tonight, The Commons LNK hosts a benefit concert for the Standing Rock Indian Reservation and those protesting the Dakota Access Pipeline. Fargo, N.D. band Baltic to Boardwalk will play with Omaha riot grrrl band The Boner Killerz, post-rock band Timecat and Omaha singer/songwriter Not Ben Shin. The show is by $5, with all proceeds will be donated to help purchase supplies for protesters. It starts at 7 p.m. RSVP here.

Head to our statewide calendar here for a fuller listing of shows. Email news@hearnebraska.org with news tips, story ideas and song submissions.