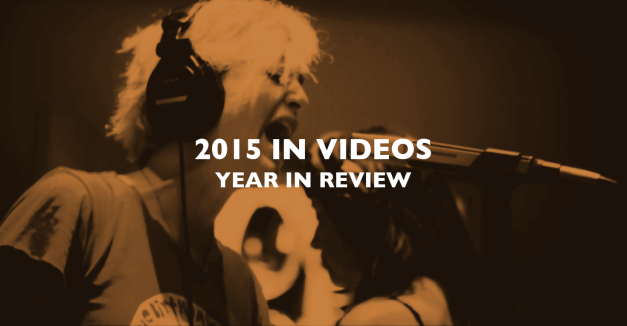 Hear Nebraska’s video production reached new heights this year, both in terms of creativity and scope.

Credit our statewide travels and new personnel. The Good Living Tour led our editorial team all across Nebraska, but the route didn’t stop there; we went as far East as Florida, catching the full Fest weekend. Visual editors Chris Dinan and Nickolai Hammar — both long-time contributors — continued to push the envelope, advancing existing video series like Sonata Sessions and Kibler’s Corner, while creating brand new ones like the Crossfade artist interviews.

Throughout 2015, HN produced more than 70 video features with the help of our trusty group of contributors. To help tell the story of the year, we assembled a list of our favorites below. Laugh along, shed a tear and join us in hoping the fun continues in 2016.

Lighters aloft, and watch Neva Dinova perform a song from their December 2014 reunion show at Slowdown.

Simon Joyner & the Ghosts played in the streets of Grand Island in July, during the final Good Living Tour stop. Before the show, our Nickolai Hammar got the legendary Nebraska songwriter alone for an episode of Sonata Sessions. The HN visual editor’s acoustic live series had many great moments this year, and we have no doubt this was one of the best.

In a dusty room of the Grand Island Masonic temple, watch Joyner and Megan Siebe perform a gently mournful rendition of “Sonny,” the lead track from Grass, Branch & Bone.

We’ve said it once, but it bears repeating: each year, Maha Music Festival feels increasingly worthy of national recognition, as well as a festival whose personal touch hits close to home. This year, on a scorching August day, our massive team covered the entire festival in words, photos and video.

This summer, our videographers captured shows, interviews and more over nearly three total weeks of storytelling and concert touring. It was the most exciting HN development of the year, and a landmark of its young existence. Here’s our video recap.

Omaha’s High Up recently burst onto the scene, carrying with it an indie-rock flavored soul sound and showcasing vocalist Christine Fink’s powerful delivery. Watch our interview with the band at its Omaha practice space, during which we talked about its karaoke beginnings, its live studio experience and their excitement for the future.

HN FM Live: “A Blues Song” by I Forgot To Love My Father

The Lincoln indie-rock seven-piece appeared on the Sept. 28 edition of Hear Nebraska FM. I Forgot To Love My Father performed four songs, including the one below, and sat for an interview. To our knowledge, it was the first live-in-studio performance at KZUM involving Christmas lights.

Hear Nebraska’s editorial team spent all three days covering Fest 14 as thousands of musicians and fans spilled sweat and shouted along together. We shouted with them, and managed to get loads of good footage. From the streets of Gainesville, Fla., to its packed bars and venues, watch our Fest 14 video recap.

This year saw the launch of multiple ambitious Hear Nebraska projects. With two brand new visual editors — brought on mid-summer — we looked to up the ante on creativity. Dinan and Hammar hatched the idea for an artist-on-artist interview series, featuring a Nebraska musician interviewing a nationally touring artist. See Through Dresses’ Sara Bertuldo took the microphone for the September series launch, interviewing Barry Johnson of Joyce Manor before the Torrence, Calif., band opened for Desaparecidos.

Watch the third installment below, in which High Up’s Christine Fink interviews Big Harp/The Good Life bassist Stefanie Drootin-Senseney. The two cover Omaha Girls Rock’s rapid, unforeseen growth and the ease with which Drootin-Senseney shifts from one band to another.

After their rain-soaked Good Living Tour concert in Ogallala, McCarter and Steinhausen busked on the sidewalk outside nearby bar 1 Eleven. Hammar and Dinan arrived just in time to catch this raunchy rendition of “Honky Tonk Hooker.”

In June, our editorial team embarked on the storytelling leg of the Good Living Tour. In each stop, our videographers produced a video focusing on each towns’ uniqueness and energy, as explained on-camera by the inhabitants themselves. Watch as some of Scottsbluff/Gering’s young residents tell us what makes their town a distinctly attractive place to live, work and play.

An Afternoon With Freakabout: Video Interview | by Peter Barnes

It was halfway through 2015, and Lincoln’s Freakabout had already enjoyed quite the year: a debut LP, extensive touring and a slot at Maha Music Festival. We sat down with the band at a Sunday-afternoon practice in August to talk about their accomplishments, gelling as a band and playing the largest festival in the state.