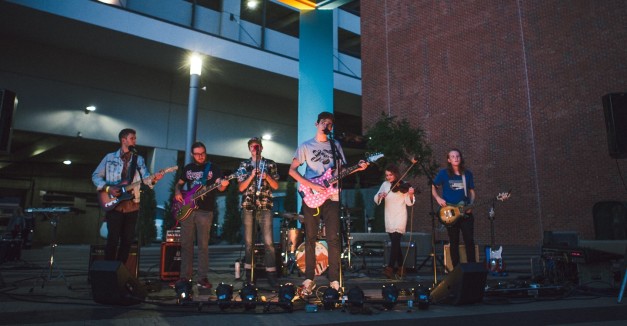 [Editor’s note: the following was read on-air prior to I Forgot To Love My Father’s in-studio performance.]

After I Forgot To Love My Father’s appearance at Lincoln Exposed earlier this year, I reductively compared frontman JP Davis to Justin Vernon — Bon Iver’s forlorn frontman — in an attempt to place the band in some kind of context.

Where their paths diverge, which would become abundantly clear over the next few months, is in stage presence, which for I Forgot To Love My Father feels like an ethereal, evolving performance art. If their creative  headspace hadn’t already existed, it would feel a little like a band thrashing knives about trying to carve its own niche. It’s more that JP Davis and company have figured out how to constantly test the boundaries of their capacity for artistic expression.

Its type of folksy, expressive, thoughtful indie rock allows it to spread out in art galleries, play a formal at Duffy’s Tavern or adorn themselves in hard rock garb as they dance into the crowd with a bluegrass band — not to mention Davis crowdsurfing in a coffeeshop. That the band has a way of injecting a faint whiff of showmanship into songs that feature desperation, longing and that sweaty-palm feeling gives them agency to play in most settings.

You won’t see that tonight — they play Thursday evening at Tower Square for Lincoln Calling, and again this weekend at a downtown Omaha venue — but what you’ll hear is a meticulously layered approach to what initially seem like nuggets of songs, born acoustically and blossoming before their audience.

Here’s I Forgot To Love My Father with “Blues Song”