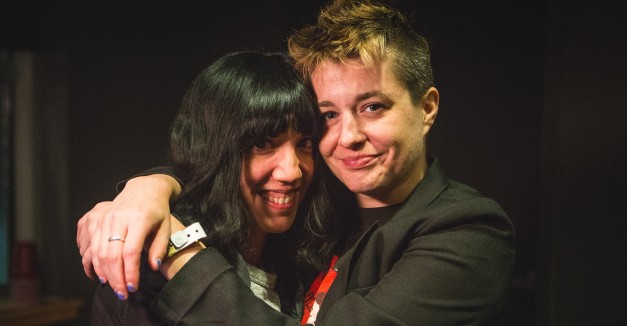 Consider Stefanie Drootin-Senseney a finalist for 2015 restlessness poster child. Not aimlessly wandering, mind you, but like her on-stage style, always pressing straight ahead.

It starts with nationally touring bands for which Drootin-Senseney plays bass. Both The Good Life and Big Harp cut new records this year, both releasing August 14. The former, Everybody’s Coming Down, was an eight-year follow-up to the Tim Kasher-fronted band’s 2007 record Help Wanted Nights. The latter, Waveless, represented a colossal sea change for a band intent on constant evolution.

The night before embarking on a nationwide tour, hours before The Good Life took the Javlin Stage at Maha music festival, Drootin-Senseney took that same stage with Omaha Girls Rock representative Vintage Paisley. Their set was a now-customary celebration of the organization into which she helped breath life.

High Up’s Christine Fink sat down with Drootin-Senseney on the last day of tour to talk about her big year. Watch the interview below, in which the two cover Omaha Girls Rock’s unimaginable progress and the ease with which Drootin-Senseney shifts from one band to the other in a matter of minutes.