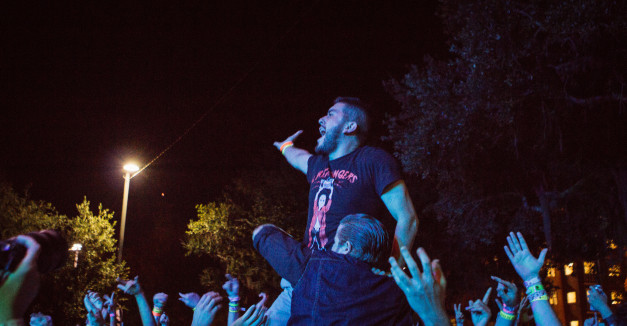 Hear Nebraska’s editorial team spent all three days covering Fest 14 as thousands of musicians and fans spilled sweat and shouted along together. It was about midway through the Saturday menu of shows that the tight-knit, supportive community aspect dawned on me.

A few of us were sitting at Palomino pool hall, wasting time between So Cal’s City Mouse and Florida natives Rational Anthem by sitting in front of World Series Game Four. We ended up next to a congenial fellow from Toronto named Steve, who wore clear, thick-rimmed glasses and a blond undercut. We jawed about his then-eliminated Blue Jays for a minute before we shook hands and parted ways. The next time we saw him, it was around the corner on the main stage at Lot 10, playing lead guitar for PUP.

At Fest, there is no pretense, no unnecessary posturing and no looming corporate specter. It’s not a leap to compare Fest to something like Lincoln Calling or Benson Femme Fest: bands with shows on the other side of town sitting stage-side or even mid-pit, cheering on their friends; masses of fans rolling from venue to venue to hit their wish-lists; costumes and get-ups and gimmicks that throw color into a whirlwind of bodies and music and PBR. There’s a camaraderie that simply isn’t present at other major national festivals.

You’ve seen it in live performances, photo essays and behind the merch table. Now, from the streets of Gainesville, Fla., to its packed bars and venues, here’s our Fest 14 video recap.