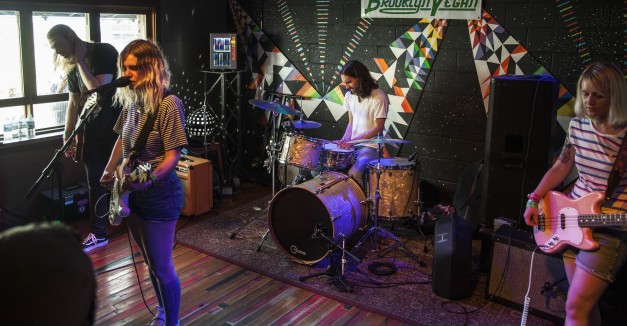 Before we get to the busy weekend in shows, catch up with this week’s news here, featuring:

Now, let the Minor Third take your hand through a packed weekend in live music…

Tonight, Brooklyn indie pop singer/songwriter Laura Stevenson plays Vega, 350 Canopy St, touring on the heels of Oct 2015 release Cocksure. Stevenson’s fourth solo full-length finds her having undergone a ‘90s power pop makeover, with grand, catchy hooks and a sonically sunny disposition for such disaffected lyrics. Her punk background is still evident, having played in Jeff Rosenstock’s Bomb The Music Industry! collective before flourishing on her own.

Also tonight, Columbus, Ohio band All Dogs comes to Milk Run, 1907 Leavenworth St. Online music blog Stereogum called its debut full-length, Kicking Every Day, “one of the bravest and most finely wrought albums about isolation and depression in recent memory.” Frontperson Maryn Jones is no stranger to Omaha, having recorded at ARC with her other band, Saintseneca. Get to know the band with Lazy-i’s Q&A from yesterday here. Sean Pratt & the Sweats, Crypt Kid and poet Jade Lacy open the show. 9 p.m., $8, RSVP here.

Junkstock kicks off today, in full-swing already with Brad Hoshaw and Mace Hathaway having played this morning. The weekend lineup includes the likes of Kris Lager Band, Stonebelly, Clark & Company, Matt Cox Band and much more. RSVP and see the full lineup here.

Tomorrow night, Kurt Vile and the Violators play a sold-out Waiting Room show with Purling Hiss. Vile’s latest album, b’lieve i’m goin down, is widely acclaimed, drawing Best New Music from Pitchfork and praise from Rolling Stone to SPIN. HN contributor Mark Hayden chatted with Vile earlier this week for a Q&A we ran yesterday, in which Vile talks about his warehouse working days, recording at Joshua Tree and what it’s like to write a chart topping single. Read it here. Again, it’s sold out, but RSVP here.

There is a pair of shows in Northeastern Nebraska tomorrow. In Columbus, Lincoln’s Pure Brown will play three one-hour sets at Micek’s Shangri-la. According to drummer Hunter Carter, that’ll be half originals, half signature Nintendo covers — roughly every song they know. Kudos to Pure Brown for making the semi-regular trip (8 p.m., RSVP here). Further north, Baker Explosion plays The Mint in its hometown Norfolk. 9 p.m., no cover, RSVP here.

Punk rock supergroup The Falcon caps a giant weekend Lookout Lounge on Sunday. The Chicago-based group comprises The Lawrence Arms members Brendan Kelly (guitar and vocals) and Neil Hennessy (drums), Alkaline Trio’s Dan Andriano (vocals and bass) and The Loved Ones guitarist Dave Hause. The band released Gather Up The Chaps March 18 on Red Scare Industries. Read this interview with The Aquarian to get acquainted. Feminist pop-punk band The Lippies opens the show along with Minneapolis band 83 Wolfpack and locals The Kennicks. 8 p.m., $13 in advance, $15 at the door (Alert: these shows have been selling out all over the country. Best not to wait). RSVP here.

Find a full listing of this weekend’s shows at our statewide calendar here. If you do not see your show or one you plan to attend, hit us up in the comments, email news@hearnebraska.org or add it yourself here.

Out and about? We will be too. Follow along and interact via Instagram and Twitter @hearnebraska. And keep those song submission, story ideas and news tips coming to the email above. Happy showgoing!