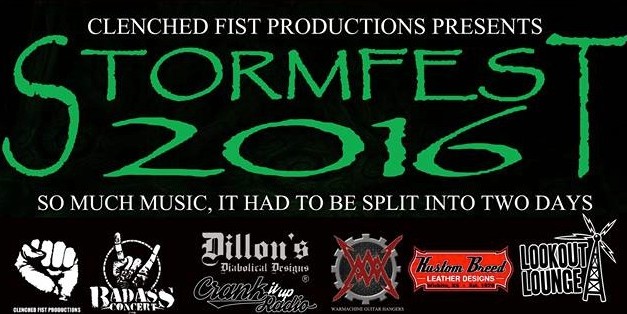 Metalheads will flock to Lookout Lounge this weekend to attend the fifth annual Stormfest, which showcases some of the best known local, regional and national metal bands.

This year will be the first year that Stormfest will take place over two days. Friday night will be co-headlined by The Clincher and Primal Waters, while Saturday will be headlined by When Towers Fall and Apathy Syndrome.

The show started out in 2012 as a way to allow minors a chance to see bands in the genre, which at the time, mostly played at bars which were 21-plus. Stormfest founder Tripp Stevens  — also bassist of TenDead and The Blood of War — says he found inspiration in the plight of young Storm Corbin, who would attend local metal shows with his parents only to find that he couldn’t get in.

“I got tired of this die hard music fan having to miss out, so I decided to rent the Sokol Underground, since it was all ages,” Stevens says. “Since most local metal shows were taking place in 21 and over bars, this was really the only option.”

Since then, Stormfest has grown into an annual event, hosting bands such as Dirtfedd, Hemlock and Green Death, along with a number of other bands over the years.

“A lot of these bands on the show aren’t bands you see in Omaha all the time,” Stevens says. “I in bring bands from Kearney, Norfolk, Des Moines and even further sometimes, [bands] that the Omaha crowd otherwise might not get to go see.”

Since its inception, Stormfest has become a must see event for fans of metal in Omaha and surrounding areas.

“It’s a real chill and hang out kind of show,” Stevens says. “Bands rock for 30 minutes and then it’s like one big happy family between sets, just hanging and partying.”

Despite expanding to two days, Stevens says that the quality of the event is still on par with previous years.

“There’s a lot of new killer bands on the show this year,” Stevens says. “From start to finish, there’s something heavy for everyone.”

Stormfest will take place Friday, April 8th and 9th at Lookout Lounge. Friday’s show will kick off at 8:00 pm and cost $7, while Saturday will start at 5:00 PM and cost $10. A two-day pass is also available for $13. Both shows are, in the spirit of Stormfest, all ages. RSVP here.

[Editor’s note: Fertwagner is owner/operator of Lookout Lounge, the venue which hosts Stormfest. Reach him through HN’s managing editor at andrews@hearnebraska.org]

Nas, The Decemberists to headline 80/35

The Des Moines Music Coalition has announced the first batch of acts to play its ninth-annual music festival, and they include heavy-hitting hip-hop and indie acts.

New York hip-hop legend Nas and indie folk veterans The Decembrists will headline this year’s 80/35 Music Festival. The annual festival takes place July 8 and 9, 2016, at Western Gateway Park in downtown Des Moines and has attracted more than 30,000 each year since 2008.

Like Maha Music Festival, 80/35 is nearly 100% volunteer run. DMMC is a nonprofit organization and collaboration among musicians, venues, promoters and community leaders committed to building a strong, diverse music economy in Des Moines.

Advance two-day tickets are on sale now for $65 and one-day tickets for $42 at midwestix.com. VIP tickets are sold out. Day-of tickets will sell for $90 for a two-day and $50 for a one-day.

The partnership between Nebraska and its artistic community has been renewed. Last week, Governor Pete Ricketts signed cash transfers bill LB 957, part of which extends the state’s intent to match privately donated funds to the Nebraska Cultural Endowment Fund up to $500,000 over the next 10 years.

LB 957 stipulates funds granted to the Nebraska Cultural Preservation Endowment Fund  must be matched dollar-for-dollar by private donations. The earnings from both the state and private sides are then distributed to the Nebraska Arts Council and Humanities Nebraska to fund grants and programs all across the state.

The bill specifically will provide up to $500,000 from the general fund to the Nebraska Cultural Preservation Endowment Fund annually on Dec. 31, starting next year and continuing through 2026. LB 956 and LB 957 were signed as part of the budget considerations for 2015-2017.

Established in 1998 by LB 799, the Nebraska Cultural Endowment benefits the Nebraska Arts Council and Humanities Nebraska. The fund increased to $10,000,000 in 2008 after additional legislation. The fund has assisted projects statewide, such as HN’s Good Living Tour.

For a full listing of tonight’s show, head to our statewide events calendar here. Keep those song submissions, story ideas and news tips coming through news@hearnebraska.org.