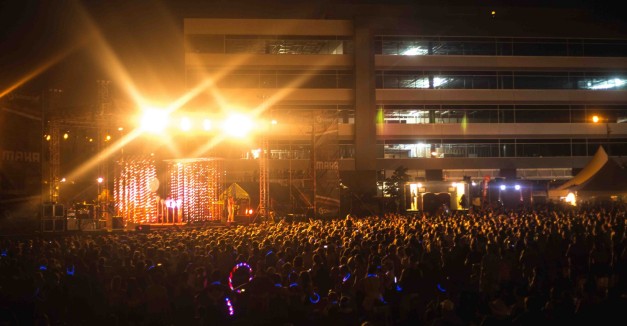 Since its inaugural concert in 2009, Maha Music Festival has grown exponentially and entirely on the strength of its volunteers. To help sustain expansion, the nonprofit organization has hired its first full-time staff member.

Maha has announced Lauren Schomburg as its full-time executive director. In a statement, the organization says community support and a grant from the Peter Kiewit Foundation helped make the move. Maha will continue to rely largely on volunteers for the actual event (Saturday, Aug. 20 at Stinson Park), while Schomburg’s presence will “allow for more sustainable growth and increased operational efficiency as the festival expands capacity.”

Prior to her hiring as executive director in December, Schomburg served as vice president on Maha’s board of directors, and as program associate at the Omaha Community Foundation, helping oversee the annual “Omaha Gives!” charity event. Schomburg joins Joel Henriksen, who has been working part-time for Maha since February 2015.

Schomburg said in an email to HN that focusing on Maha full-time will bring increased institutional knowledge, allow her to explore growth opportunities and enhance the organization’s ability to become a better community partner beyond the day-of-show. That also means fostering partnerships that allow Maha to continue booking big lineups.

“It also allows us to focus more time on sponsorships, which is directly correlated to whether or not we’re able to book the bands you want to see and execute an experience you don’t want to miss,” Schomburg says.

In addition to cool acts and gobs of fans (which helped sell out Maha for the first time last year), Schomburg says the position’s creation is important because it’s the realization of a vision built on the belief in enhancing Omaha’s culture.

“Organizations like Maha, Hear Nebraska, Kaneko, Omaha Girls Rock, The Union for Contemporary Art, and so many others that are doing great work in the community while enhancing the creative culture are critical to our community’s ability to retain talent, increase national attention and grow wisely,” Schomburg says. “I feel so fortunate to now get to work full-time on something in which I believe so deeply.”

In the same press release, Maha announced tickets will go on sale Friday, April 8 at 10 a.m. General admission tickets are $55 this year (up from $50 last year), while VIP packages are $185. Find them here.

The lineup announcement — itself an annual attraction — comes Thursday, April 21 at the official announcement party at Reverb Lounge from 6-7:30 p.m. RSVP here.

Tonight, Florida-based rapper Flo Rida performs at the University of Omaha’s Baxter Arena, and will do so with local hip-hop duo Both. Born Tramar Lacel Dillard, Flo Rida rode his first hit “Low” to stardom in 2008 after that song broke the record for digital download sales at the time of its release. He’s sold more than 80 million digital singles worldwide, making him one of the best-selling artists (on a list above Red Hot Chili Peppers and Coldplay and just below Van Halen, REM and Beyonce).

Get to know Flo Rida better with UNO’s primer here. Doors are at 6 p.m., Both, which continues to nab great gigs, goes on at 7 p.m. so get there early if you’re going. Tickets are $5 for UNO students, $20 for the general public. Buy them here.

Tonight, Har Mar Superstar comes to The Waiting Room, 6212 Maple St. Singer/performer Sean Tillman is currently on tour in support of Best Summer Ever, his latest album out on Cult Records. He is celebrated as an ever-evolving songwriter and exciting performer. Tillman was in the news lately for his outburst at SXSW, angrily stopping a performance after one song due to technical difficulties. The band — which features Desaparecidos guitarist Denver Dalley — redeemed itself later in the weekend (see HN’s photos here). Digital Leather and Twin Cities act Bug Fix open the show. RSVP here.

Yonder Mountain String Band performs tonight at The Bourbon, 1415 O St. The Colorado-based act has stretched the boundaries of bluegrass for more than 17 years, incorporating rock and improvisational elements into the acoustic genre. The band is a summer festival mainstay, and has amassed a stout following because of it. Wisconsin act Horseshoes & Hand Grenades opens the show. RSVP here.

For a fuller listing of this week’s shows, head to our statewide calendar at hearnebraska.org/events. If you do not see your concert or one you plan to attend, email us at news@hearnebraska.org, list it in the comments or add it yourself here. And keep those news tips, story ideas and song submissions coming.