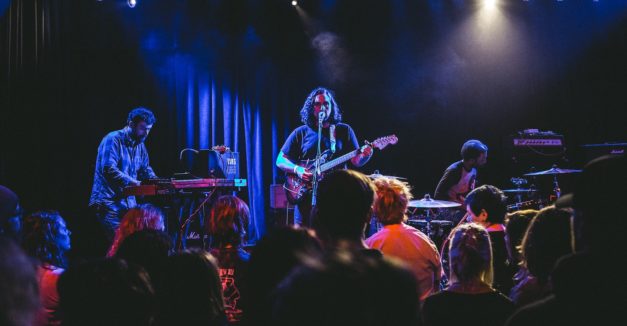 Oquoa is back with its first new recordings since 2014.

The Omaha indie rock band announced its In Oneir EP, out on tape Saturday, July 30. It’s the two-year follow up to the band’s self-titled debut.

Oquoa has already enjoyed a busy year, having just wrapped a brief touring stint with The Good Life (with whom it shares drummer Roger Lewis) and Speedy Ortiz, and opening for Ty Segall and the Muggers. The band celebrates In Oneir at a July 30 O’Leaver’s show with Bien Fang, Lodgings and Nashville’s Another Afternoon (RSVP here).

Benson First Friday Femme Fest is gearing up for its second year. Operating with no budget, organizers are looking for some help.

Thus, Femme Fest is throwing a fundraising concert July 15 at O’Leaver’s. Anna McClellan, Mesonjixx and Badland Girls will play the club at 9:30 p.m., with entry at $10. Proceeds from the show will pay the performing acts, as well as help with PA rentals and advertising for the main event.

Femme Fest will again flood Omaha’s Benson neighborhood this September after a successful, highly impactful first year. Nearly 60 acts — all featuring at least one female member — will occupy eight venues with the goal of showcasing Nebraska’s strong women musician community. While most of the bill hails from Omaha, some will travel from Lincoln, Grand Island, Kansas, Michigan and Minnesota. See the full lineup and venue list here.

RSVP to the fundraiser show here.

When The Faint released Danse Macabre in August 2001, it was part of the now-canonical early-century Nebraska output. In a broader national conversation, it was also amongst the niche tide of dance-punk albums to come of out the early-aughts.

AV Club surveyed the rapid rise and flood of the genre in a recent article, including Danse Macabre among other (at the time) vastly popular acts such as Hot Hot Heat, Franz Ferdinand, (still-beloved) LCD Soundsystem and The Killers (editor’s note: I revisited Hot Fuss while on the road this weekend and, don’t laugh, it holds up surprisingly well).

The article, written by Kevin Warwick, places The Faint at the intersection of Depeche Mode/The Cure and an affinity for strobe lights. He writes further: “Instead of feeling lured to the dance floor, you were mercilessly drawn to it like a bird being sucked into the engine of a Boeing 757—and then impelled to move just to keep in rhythm with the shaking of your own skull.”

Most of these bands are still active, if significantly less bathed in the limelight, and it’s no less true for The Faint, which released Doom Abuse in 2014 and single “Young & Realistic” just last month. It goes on tour with Gang Of Four — a band the article mentions as a forerunner to the genre — for a month beginning September 29.

ARC Studios artist Joseph (and Mogis) on The Tonight Show

Quick late-night programming note: Oregon band Joseph, which recorded its forthcoming album I’m Alone, No You’re Not with Mike Mogis at ARC Studios, will be on The Tonight Show with Jimmy Fallon tonight. The album, which drops Aug. 26 on ATO Records, features engineer Ben Brodin on keyboards.

This is relevant here because ARC’s Facebook page hints at Mogis making an appearance. You’ll have to tune in to find out. Hear Joseph’s “White Flag” below:

North Platte’s Nebraskaland days is in full swing, tonight featuring live music from Matt Whipkey and Township & Range as part of its “Taps & Tunes” concert from 6 to 8 p.m. Lincoln’s Zipline Brewery, Blue Blood Brewing Company and Empyrean and Kearney’s Thunderhead Brewing will be in attendance. We caught Brad Hoshaw at last year’s event while on the inaugural Good Living Tour storytelling trip and had a blast. HN helped book this year’s concert. Find more information on Nebraskaland Days here.

There’s plenty else going on in Lincoln and Omaha tonight. Find a fuller listing of shows at our statewide calendar here. If you do not see your show or one you plan to attend, leave it in the comments or add it using our contribute page here.

Musicians/bands: have an upcoming release, tour or other news to share? Send it to news@hearnebraska.org.