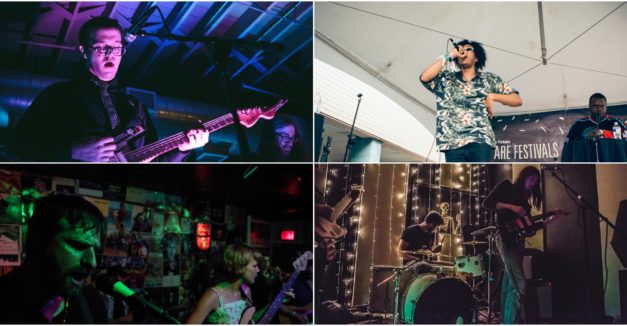 Catch up with this week’s Nebraska music news and features:

Plus, watch our video interview from Wednesday with Lincoln musicians Benjamin and Marina Kushner. The father-daughter duo talk about their at-home experiences and what it means to pursue music in the same scene. Find it here.

Concert Round-Up: A Feast for Shows

It’s about time you got out of the house. Good thing there is plenty going on in shows for the weekend. Check out a few selections below and find the fuller version of our statewide calendar here. Leave additional and upcoming shows in the comments or email to news@hearnebraska.org.

Gogol Bordello at Slowdown – The gypsy punk band comes to Omaha in the midst of a U.S. tour, part of its seemingly endless road schedule. Frontman Eugene Hütz spoke with HN earlier in the week about the band’s most recent album, Pura Vida Conspiracy, and the energy it takes to tour with such frequency and vigor. Read the interview here. 9 p.m., $30, RSVP here.

Friendsgiving at The Bourbon – This is a two-night event featuring a slew of local bands and comedians and a canned-food drive benefitting the Food Bank of Lincoln. Tonight, comedians Brad Stewart, Zach Peterson, Sam Bontrager and James Lindsey and Lincoln bands Mad Dog & the 20/20s, Salt Creek and The Morbs perform. Tomorrow, it’s Jordan Kleine, Georgia Comstock and Jack Comstock with A Ferocious Jungle Cat, Bien Fang and The Way Out. Both shows are all-ages and start at 8 p.m. Entry is $5 for 21-plus, $7 for under-21, with $2 off for donation. RSVP here.

Sk8 Maloley, Both at The Waiting Room – Sk8 aka Nathan Maloley is a Nebraska born rapper, producer and songwriter performing in his hometown of Omaha and has recently released a new single called “Yeah 4x.” The single is great addition to the rapper’s commercial brand of self, and is perhaps the rapper’s strongest single yet. HN’s Jhalisa Robertson caught up with Sk8 in advance of the show ($10 in advance, 6 p.m., all-ages. RSVP here).

HN: How do you feel that you improve your community with your music?

SK8: I improve my community by giving them not only hope but encouragement to make it out of the city doing exactly what they love to do. I feel as if I inspire a lot of the youth from Omaha because we never really had to many people to look up to from our city. Not only that I have donated to the Boys and Girls Club and spoken a few times while I am back to the kids to ensure that they too know can accomplish anything they put their mind too.

HN: What makes you different from any other rapper that inspires you?

SK8: I think what makes me different from most rappers is that my sound is not just rap it’s very melodic and “smoove,” as I like to say. Something else that separates me from other rap artists is where I’m from, no doubt. It keeps me humbled and motivated and I think it has something to do with what drives me everyday to better myself. I just feel being from Omaha is very unique and it in my mind gives me a little edge over others

What was the first concert that influenced you to produce music?

SK8: The first concert that really drove me to make music was my sophomore year of high school I went to the waken baken tour that Wiz Khalifa was headlining at the Sokol at the time. Going to the concert I hadn’t known too much about wiz tho I had studied a lot of other hip hop at the time. My buddies told me I should go and so I went with them.  When the concert started and he came on stage, it was an immediate presence felt in the room and he had everyone’s attention. Now of course the whole Sokol was getting “hot boxed” with the herbs and I looked around and seen everyone in the room wit some sort of smile of grin on they face. This was when it hit me really, that this man can walk into a city that marijuana is illegal in and spread his positive message at the same time.  Then it ran through my head that he wakes up and does this everyday of his life.  After that concert i told myself I wanted to do exactly what this man does in my own creative and influential way.  So that night when I got home from the concert, I sat and wrote my first rap ever.

What kind of legacy do you want to leave behind?

SK8: Be the man that always kept it real to the people and himself. Be the man that made great influential, inspiring, motivational music that is timeless. Build a dynasty in the city bringing sports and entertainment together it some way shape or form. And lastly bringing joy to everyone I touch through my music so they know that you can never take life too serious and you must have fun and enjoy what you do.

Do you think that more rappers should talk about the political and health benefits of marijuana, rather than just talk about smoking it and partying? If not…why do you think so?

SK8: I think rappers are able to express themselves how they want too. I don’t think we need to necessarily speak upon the political or health benefits but more on the side that you can smoke weed and it still be productive. I think we need to spread more awareness about productive smokers instead of the ones that just sit around and do nothing when they smoke. Some people are just like that it doesn’t have nothing to do with them smoking but it puts a bad rep on all the rest of us smokers that are out here grinding working hard and still getting stoned.

SK8: My new single was really just a song I made with my hometown producer Bucky p. He got about 8 tracks on my new project but really the singles end up being really organic never forced.

How does it feel to be performing in your hometown?

SK8: I’ve never been more excited for a show then this one in Omaha. It’s amazing to think that I have this much support back home.