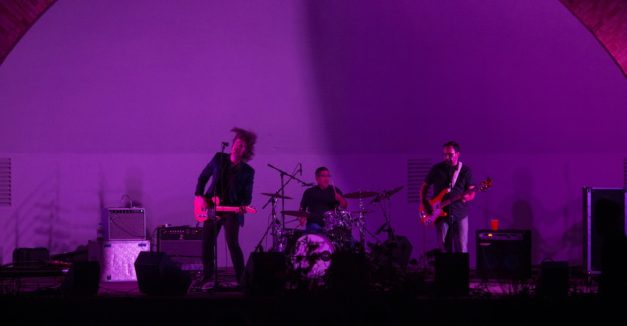 Nebraska boasts numerous interesting, historic and scenic concert venues throughout its entire landscape, not just Lincoln and Omaha. The Nebraska Arts Council is looking to fill them with talented professional artists from within the state by inviting them to join its touring artist roster.

The Nebraska Touring Program is designed to showcase a variety of quality, native-Nebraskan touring performances and exhibits across the state. Applications to join the touring artist roster are due by Dec 1. Accepted applications will be listed on NAC’s Artist Directory, from which sponsoring organizations can apply for funding to bring those artists to their venues.

Simply put, the roster gives visibility to artists looking for regular gigs that fit their target audiences, or for them to find new ones. Omaha rocker Matt Whipkey was accepted onto the program in 2015, and since then has had “an awesome experience” playing the likes of Manley’s Lofte Theater and the Red Cloud Opera House — places he may not have been connected with otherwise.

“Over the years, my bands have played the typical Nebraska stops: Kearney, Grand Island, et cetera,” Whipkey says. “However, under the guise of a normal bar gig. I doubt I would have found myself in some of the communities I have being a part of the touring artist program.”

Another benefit of the program is that booking arrangements are typically placed well in advance. Whipkey says unlike a typical bar gig, which books weeks before, many of his shows through NAC were set a year or more prior.

“This definitely keeps the schedule full in advance and presents my team the unique challenge of working around these anchor dates,” Whipkey says.

View the current artist roster here. Find more information about the program and the application here.

The song comes from Jocko’s debut demo, which it released via tape Oct 14 at Brothers Lounge. Vocalist Jacob Adams (also the Third Eye Merchants emcee Static Soul) screams wildly and with passion as the band behind him riffs and pounds relentlessly. “Deep End” is brief but hard-hitting, its visuals (created by Ethan Nichols) recreating the overwhelming brain space when “the weight of the world a little too heavy.”

For a second year, local artisan show Love, The Locals will bring more than 30 area artists and makers together to showcase local art and music.

The event will take place at The Bay on Sunday, Dec 11, inside its new addition space. There will also be food trucks, beer from Zipline Brewing and five local musicians: Jenny Hietbrink, Karen Choi, Bernardus’ Ben Kramer, Nation and Andrea von Kampen.

“Live music has always been really important to us,” says Love, The Locals co-organizer Kaitlyn Bright. “We feel that the musicians can contribute and show off their art of music to the community and it encapsulates our ‘loving our locals’ motto even more to have them there.”

Tonight, Lincoln indie folk act Bernardus plays Duffy’s Tavern for its first full-band show since its frontman Ben Kramer returned from a sprawling acoustic tour, which took place over the last few months. Omaha folk band Ragged Company comes down to join them. It’s Dad’s $1 beer night, which means entry is by donation. Toss some of that saved beer money to the bands. RSVP here.

Find a fuller listing of this week’s shows on our statewide calendar here. If you do not see your show or one you plan to attend, email us at news@hearnebraska.org. Use that same email to pass along news tips, story ideas or other band happenings to be considered for coverage.