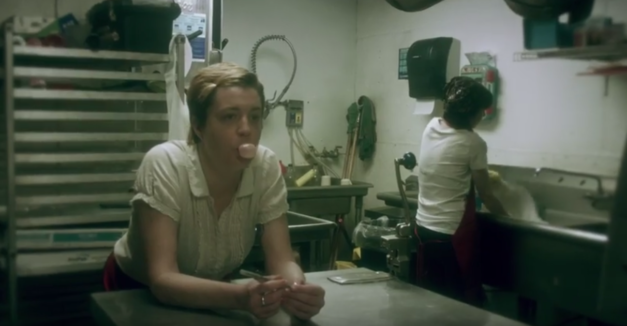 Piles of year-end lists have come and gone, and with 2016 in the books, many are looking ahead to a new year of music. One (perhaps unlikely) national outlet has included a Nebraska band amongst its top 10 list for January.

Elle.com has featured Omaha indie/soul band High Up in an article titled “10 Best New Songs To Listen To In January,” premiering the new video for “Two Weeks” as part of its top 10 list. It appears amongst a few major notable acts in Ty Segall, The Flaming Lips, The xx and Foxygen.

Filmed at Shirley’s Diner by Harrison Martin, it features the band suffering (and playing) through the pains of their back-of-house restaurant jobs (and features a few hilarious cameos by the likes of Craig Dee and Derrick Higgins).

While the song itself debuted more than a year ago, the new video for “Two Weeks” is quite the sight. Plus, it’s certain that High Up is new to much of the international lifestyle and fashion magazine’s massive readership. With high praise in comparisons to Sam Cooke, Janis Joplin and The Dead Kennedys, that’s a good thing.

Find the feature here and watch the new video below:

Nebraska comedians: this is your last chance to apply for the annual (and disappearing) Crom Comedy Festival.

This year will be the last for the event founded by Omaha native Ian Douglas Terry, and will feature festivals in Omaha, Denver and, for the first time, Toronto. The application to perform is due Sunday, Jan 1. Apply here.

Basement on a Hill Podcast recaps 2016

Omaha horror movie and music podcast Basement on a Hill recapped 2016 in a 90-minute episode it published yesterday. In total, it hosted 46 guests, played 45 bands, discussed 53 movies and quizzed 14 Horror Exam contestants. The pod is a ton of laughs — and chills — and worth checking out.

Listen to the year-end episode below, and catch up with all 45 episodes here.

It bears repeating: 2016 is finally coming to an end. Though time is a human construct, take the widely-accepted opportunity to hit the reset button and hit a few great shows along the way. Our picks are below. Head to our statewide calendar here for the fuller listing, and let us know what we missed in the comments or by emailing news@hearnebraska.org.

The Faint kicks off a two-night run at Slowdown tonight with Plack Blague and Closeness. As you know by now, the Omaha dance punk band released career retrospective Capsule:1999-2016 earlier this year, a look back at its danciest tunes and a vessel for three new tracks. Our On The Record podcast team talked about one of them, “Young and Realistic,” and more in the year-end episode; listen here. Closeness emerged this year as the duo project between Todd and Orenda Fink. Plack Blague has been doing awesome Plack Blague things all year, and this is the first of two chances to see him before the year is out. 8 p.m., main room show, $25, RSVP here.

Omaha electronic project ridgelines (Mike Johnson) hosts an end of year concert at O’Leaver’s tonight in celebration of his new album the scarlet ibis, inspired by the short story of the same name by James Hurst. Eros & the Eschaton’s Matt Arbeiter will perform at Johnson’s side. The show also features The Sunks and ridgelines collaborator Both. 9:30 p.m., $5, RSVP here.

In Lincoln, Orion Walsh celebrates the release of his seventh studio album, 7, tonight at Crescent Moon coffee shop with Ozark Hutch. As we noted with the initial announcement, this album finds Walsh checking in after an extended period of rest from his travels and on the verge of taking off on a European tour. “Troubadour’s Lullaby,” one of three tracks currently available, explores the conflict between a road-weary traveler’s desire for rest and the tug one feels as such a stationary period ends. Listen below. 8 p.m. show, RSVP here.

Happy gOo Year celebrates its 10th anniversary by ringing in 2017 with The Faint at its Slowdown home. It has sold out the past nine years worth of indie rock dance parties and as Fink told us yesterday, this year is shaping up to be its most exciting yet (I personally want to know what “sweet floss” is). $40 advance tickets, $50 on the day-of. 9 p.m. show. RSVP here.

In Lincoln, Duffy’s Tavern hosts its own blowout featuring I Forgot To Love My Father, Universe Contest and Plack Blague. Plenty of intrigue here, as it will be the final show for Universe Contest bassist Saber Blazek with the band, plus it’s the first time onstage for IFTLMF in six months. 10 p.m. show, $5, 21-plus, RSVP here.

Quick note: this is the final news column of 2016. Thanks to everyone who read, commented, shared, criticized, contributed or otherwise enjoyed our coverage. The brainchild of former staff writer Jacob Zlomke has continued to grow since its founding in 2014 and we’re excited about its direction. We are cooking up an exciting development for next year, so stay tuned.

Think we can do better? Email suggestions, news tips and story ideas to news@hearnebraska.org. Follow us on Instagram and Twitter (@hearnebraska) for more. See you January 3.