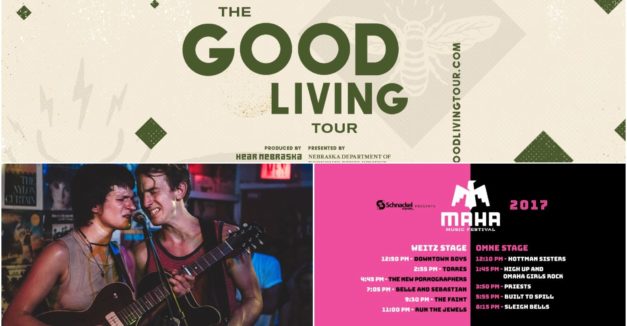 Like many of the stops on this year’s Good Living Tour, Red Cloud’s citizens share a sense of community that they say doesn’t translate into larger population areas like Omaha and Lincoln. There’s a camaraderie that runs through the cobblestone streets of downtown and pushes community members to better their city, but also to acknowledge and appreciate the agricultural heritage that brought them to where they are today.

Lester Junction, the Red Cloud country and blues band, was born out of the town’s farm lifestyle.

“I don’t know if I’d be here if it weren’t for ag,” Lester Junction guitarist Cal Rasser said in a HN feature story from last year’s Good Living Tour.

When they’re apart, the farmland is the members of Lester Junction’s focus, but together, it’s the music. The band plays its second hometown Good Living Tour concert in as many years Saturday night at Starke Round Barn in Red Cloud, and they’re accompanied by prolific singer-songwriter Brad Hoshaw and his band The Seven Deadlies, Americana punk band The Ramparts and Omaha vocalist Edem Soul Music.

Earlier on Saturday, HN will host a workshop and discussion at the historic Red Cloud Opera House to consider how to increase the presence and support of local, original music throughout the community. The workshop is open to the public and starts at 1 p.m., lasting about an hour. RSVP here.

With about a month until Maha Music Festival on August 19, the daylong, two-stage fest released its band schedule with The Hottman Sisters and Downtown Boys kicking things off and Sleigh Bells, The Faint and Run The Jewels closing out the night. Take a look at the full schedule below, and head over to mahamusicfestival.com to find more information and to grab your tickets.

Last Sunday, Film Streams ran the Summer of Love documentary “Monterey Pop,” the first of ten films from this summer’s Sights on Sounds series, which features recently restored and new music movies. The full lineup includes visits into the height of psychedelic rock (“Deconstructing Sgt. Pepper’s Lonely Hearts Club Band”), the rise of new wave (“Stop Making Sense”), the birth of punk (“Turn It Around: The Story of East Bay Punk”) and the underappreciated influence of Native American culture on pop music (“Rumble: The Indians Who Rocked the World”). The series runs every Sunday until Sept. 3. Find the full Sights on Sounds lineup here.

Also in Film Streams news, the independent theatre announced its new LGBTQ-focused film series Gender Revolt: A Celebration of Queer Cinema, which traces the history of LGBTQ cinema back to its origins and examines its climb to Best Picture Oscar status. The series is a partnership between Film Streams and the University of Nebraska at Omaha’s Women’s and Gender Studies Program and presents films such as “Pariah,” “All About My Mother” and “Portrait of Jason.” The series kicks off on Aug. 26 and ends one month later on Sept. 26. See Gender Revolt’s full lineup at Film Streams’ website here.

Admission for both the Sights on Sounds series and the Gender Revolt series is $9 for general admission; $7 for seniors, students, teachers, military, and bikers; and $4.50 for Film Streams members.

Photo Coverage: Big Thief at Hi-Fi House and at O’Leaver’s with Thick Paint

After an outdoor show with Conor Oberst was canceled, Brooklyn-based Saddle Creek indie folk band Big Thief still made sure to get an Omaha date into its tour. They announced a replacement show at O’Leaver’s last week, and before Thursday night’s show, they stopped at Hi-Fi House for an interview. The conversation was part of a new series of interviews with touring musicians that Hi-Fi House has been tackling for the better part of the last two years, focusing on what music inspires the artists and how vinyl and records have influenced their musical lives. The series will be uploaded to YouTube. HN multimedia intern Lauren Farris sat in on the interview and caught the show at O’Leaver’s. See her photos below. 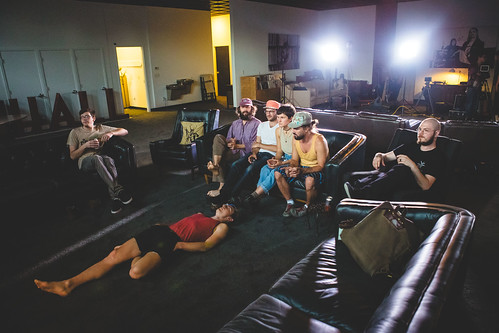 Big Thief listens to records before their interview at HiFi House. 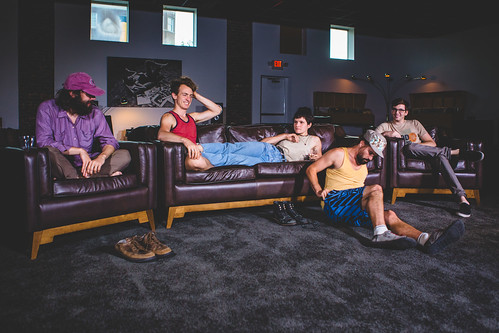 Big Thief relaxes before their interview at HiFi House. 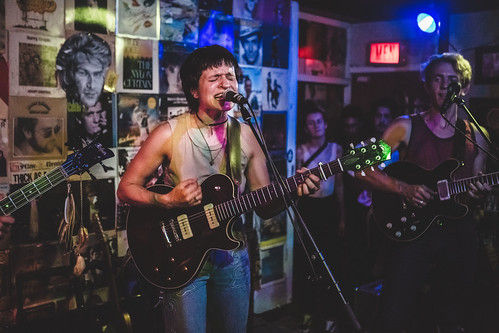 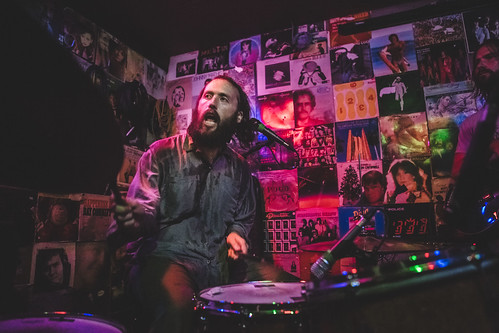 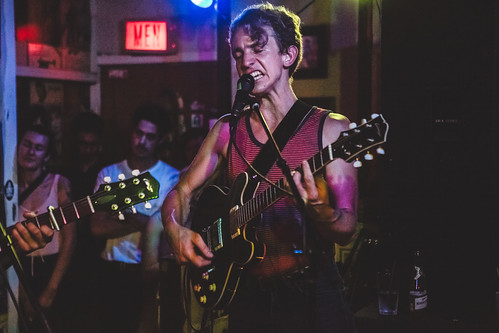 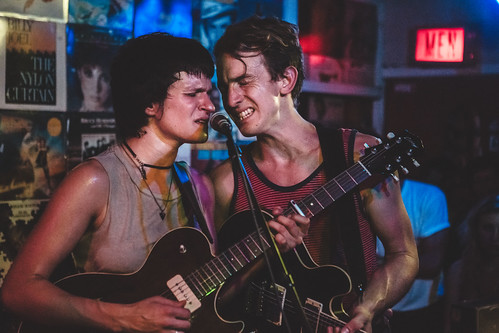 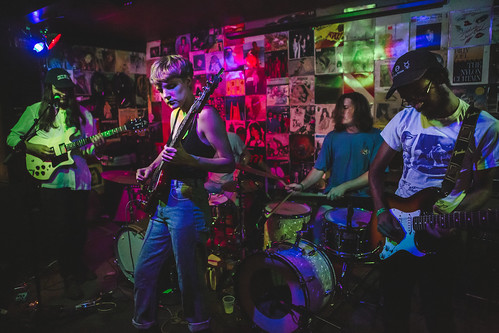 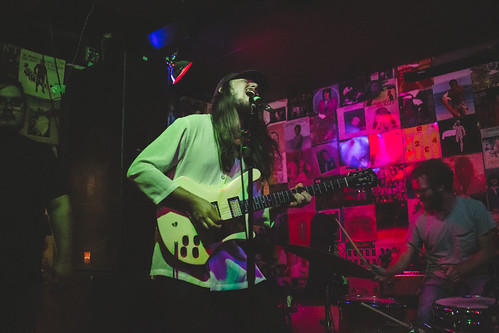 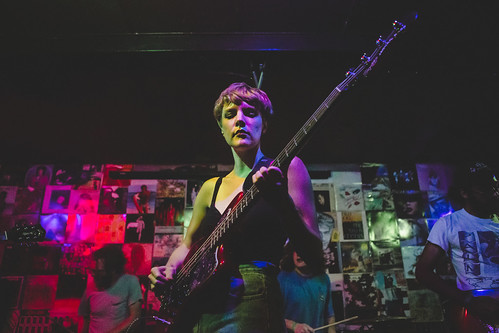 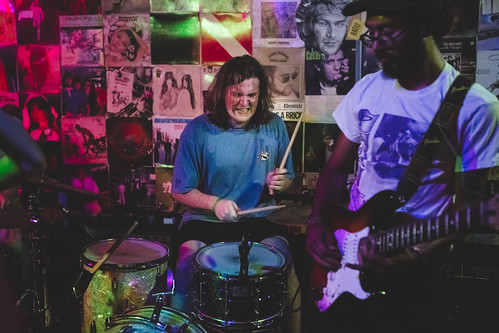 Plan your weekend with our show picks below, and head over to our events page for a fuller list of shows happening around the state. If you don’t see a show on the events page, you can add it with our contribute feature here.

David Nance and Noah Sterba at Reverb Lounge – Tonight at Reverb Lounge, Omaha lo-fi rocker David Nance releases the anticipated follow-up to last year’s More Than Enough LP, with Negative Boogie on Ba Da Bing Records. But Nance isn’t the only one releasing a new record at the show, as Noah Sterba has one on the way tonight, too. Sean Pratt and the Sweats open the show. 9 p.m. $7. All ages. RSVP here.

Omaha Girls Rock Showcase at Slowdown – A week of hard work and fun ends tomorrow night at The Slowdown when the Omaha Girls Rock summer camp’s 13-16-year-old group showcases the songs they’ve been working on. For those unfamiliar, Omaha Girls Rock is a weeklong program that brings young girls together to form their own bands, and those bands write the songs that they perform at the end of the week. The 10-12-year-old group presents its songs next week at The Waiting Room. Tomorrow night’s showcase is $8 and starts at 5 p.m. RSVP here.

See Through Dresses Album Release Show with Fullbloods and Bokr Tov at The Waiting Room – Omaha dream punk band See Through Dresses drop their second full-length, Horse of the Other World, today on Tiny Engines, and they’re celebrating with an album release show Saturday night at The Waiting Room. Hear what HN’s On The Radar podcast team thought about the album here. Kansas City psych pop band Fullbloods and Omaha’s Bokr Tov open the show. 9 p.m. $7. All ages. RSVP here.

Easter Teeth with The Dancing Dead and HAKIM at 1867 Bar – The weekend closes out with a stacked show at 1867 Bar with California noise rock band Easter Teeth stopping through Lincoln on a two-week tour that takes them from Las Vegas to Brooklyn and back to the West Coast. Lincoln post-punk band The Dancing Dead and local rapper HAKIM open the show. 9 p.m. $5. 21+. RSVP here.