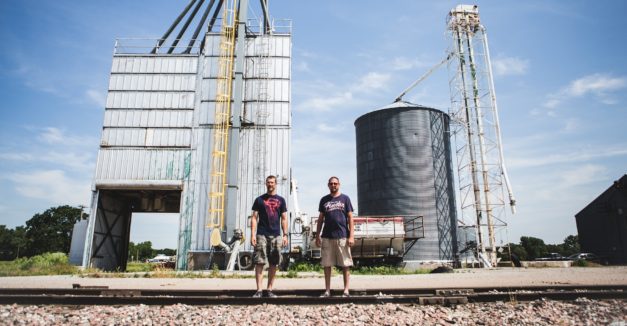 In a town the size of a square mile, it’s difficult to imagine anything goes unnoticed. That is, until you drive past the old grain elevator south of Red Cloud, Neb., and take a closer look.

On this unassuming Saturday in June, a handful of Red Cloudian rock musicians — most of them farmers, and all Red Cloud High School alums — load their Fender guitars and mic stands out of a nearby scalehouse.

Hands are being used to grip the necks of electric guitars, where they normally weigh out cattle feed. Lester Junction’s five members rehearse here, in this agricultural building that serves as the band’s practice space, just a few hours before playing a beachside concert on Harlan County Lake’s southeast side.

While the Nebraska farm town is best known for being the hometown of famed novelist Willa Cather, a different facet of Red Cloud’s identity emerges amongst a plethora of guitar amps, cables and drum kits — one separate from its rich farmland, but still rooted in it.

Lester Junction guitarist Cal Rasser, 43, points out area plot maps hanging on the walls as he describes growing up in Red Cloud. Agriculture isn’t so much a topic of discussion for the cattle rancher as it is its own language. Rasser tends to eschew explanation, cutting straight to the chase.

Rasser says growing up in south-central Nebraska ultimately gave him a sense of freedom and independence. Rather than lulling in the inevitable moments of small town mundanity, Rasser embraced them. Walks to the local pool, trips to the reservoir and canoeing down the Republican River were typical of a Red Cloud rendezvous. At times, the means of entertainment that Rasser managed to find were atypical from his teenage peers.

“I wasn’t really the type to go hang out at a bar, so I snuck a guitar out of my mom’s basement and restrung it because I play left-handed,” Rasser says. “It was something to do to cure the boredom.”

In a flighty decision to start a band, Rasser began searching for members while also teaching himself to play bass. He eventually learned to play guitar and convinced Todd Mahin to join.

“We never took any lessons,” Rasser says. “It was completely organic.”

“When we originally started, it was always Nirvana and Green Day and some Rage Against The Machine,” Mahin says. “But none of that really speaks to small town America.”

But to get gigs at bars and community functions in rural Nebraska, they had to learn everything from rock to country to blues. A typical Lester Junction two-set performance includes renditions by AC/DC, U2, Stone Temple Pilots, while also mixing in their original songs which draw on the band’s alternative influences.

Throughout the years, Lester Junction has learned to give a crowd what it wants — even if it doesn’t necessarily jive with the band members’ musical preference. Rassers says this challenge has made the group more versatile and eclectic.

“If Todd and I played in the band that we wanted to play in, no one would pay us any money to play where we play,” Rasser says. “We have to be aware, and that’s why we play such a wide range [of songs and styles], because we know we have to appeal to such a large audience.” 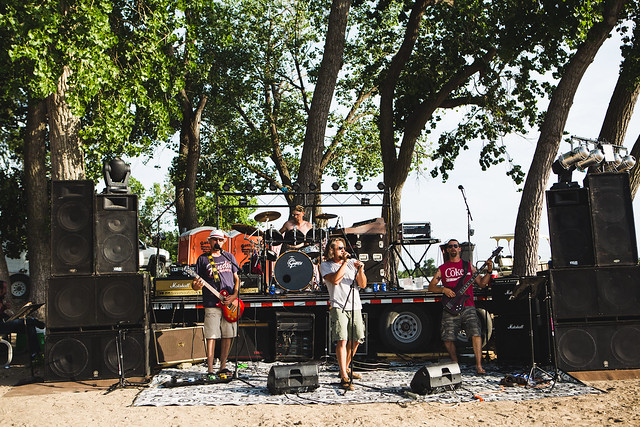 In hindsight, the band has always been dependent upon who could play, and when. Though Lester Junction’s seed was planted more than 20 years ago, a formal band didn’t come to fruition until Mahin returned to Red Cloud from Omaha in 2013. After working as an electrician for eight years, Mahin accepted a maintenance job as a city water operator and lineman.

Many rural American communities are fighting to maintain and grow their populations, and Mahin’s experience — having left and returned to Red Cloud — is an integral part of this common narrative.

“There’s this rural push for people to move out of the cities and back to their hometowns,” Mahin says. “But the opportunity isn’t always there for everybody.”

It was ultimately the sense of community and close-knit familial ties that led Mahin to leave his “dream job” to return with his wife and two kids. He considers himself one of the lucky ones.

“I could count off the number of people from Red Cloud who live in Omaha but want to live here and just can’t, because economically, there’s too much money in Omaha compared to what they could make here,” he says. “Yet when you talk to them, they all say, ‘I wish I could go back home.’”

While some band members have come and gone, Red Cloud has remained the glue that’s bound Lester Junction.

“What other band can you find, that all of them went to the same high school together, and more than 20 years later, are still playing music together,” Rasser says.

“I think part of why we [play music is] because we want it for the community,” Rasser says. “So that’s definitely an influence, to get in here, and help the community grow.”