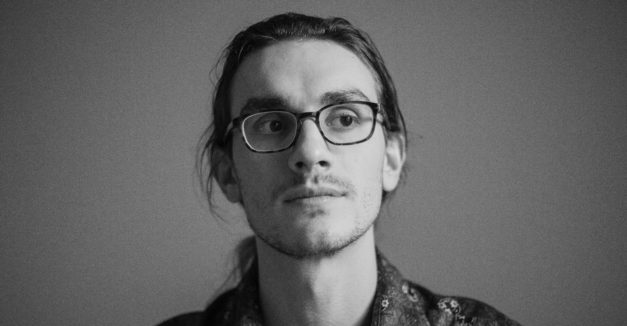 Q&A: Mitch Gettman on the “Enemies Hiding in Plain Sight”

The characters in songs we often relate to best are those who experience the minutia of everyday life in a way that feels real. Some line in an argument or the weaving in a rug are described in a way that must have been plucked from reality, yet leaves enough space for us to fill in the blanks ourselves.

Omaha songwriter Mitch Gettman is adept at recreating these skeletal memories because they are born of his personal life. Dichotomy, his 2015 full-length, yields the best results: Gettman writes of extensive boredom, desperate heartbreak, unsolvable apathy, all with specificity that borders on the mundane. Those details, he believes, are the things we all experience, our means of connection.

“I want to make stuff that is going to resonate with people and the only way I can think to do that is to be honest in my music and hope that that honesty strikes a chord in people’s hearts,” He says.

Gettman has been at it since debut 2010 EP Worn, turning in perhaps his most in-depth work with Dichotomy. Along the way, he earned the 2014 Omaha Entertainment and Arts Award for Best Singer/Songwriter and has performed regularly throughout the state. Before he headlines Hear Grand Island this Friday, Gettman exchanged emails with Hear Nebraska on his perspective-based songwriting, freshening his influences and the classic album his dad pushed him to cover. Read on for the interview.

Hear Nebraska: You’re well-versed in a multitude of instruments; the drums, guitar, piano, and harmonica are just some featured in your work. Which do you have an affinity for when writing?

Mitch Gettman: Most of my songs start as an idea. I’ll get an idea for a hook or a melody and the rest is really just a quest to fill in the blanks and turn the idea into a full composition. I used to flesh out my ideas almost exclusively on the guitar but as of the past couple years I’ve been using the piano for that purpose. I’ll write a song with whatever though, I mean the song “Overture” from my EP Nothing Stays the Same started with a riff I came up with one day on the cello. If it makes sound, I’ll try to make a song out of it.

HN: Although your work has been compared to artists such as Elliott Smith and Jeff Buckley, your recent music steps a little away from that, into the realms of Stevie Wonder and the earlier stylings of the Beach Boys. What would you say has inspired the change?

MG: Everything changes! All the time, things are changing. I’m not separate from that. I mean, I have to change. My style has to change. Thing is, I don’t listen to Jeff and Elliott that much anymore. I mean don’t get me wrong, I love those guys and I always will. They made me the artist I am today, but I’m always looking for something I’ve never heard before. I don’t know how people can go their whole lives listening to the same classic rock station every day. There’s a lot of music out there. I mean people put their heart and soul into that shit and radio stations all over the country just continue to play “Baba O’Reily” over and over again. I love a variety of styles of music too and I want to incorporate their influence on me as much as I can into my own songs. I love hip hop, I love jazz, love soul and funk. I’ve even been getting into MPB stuff lately like Jorge Ben and this album Clube Da Esquina that’s a sort of collaboration album by some popular Brazilian pop artists in the 1970s. Take it from Bowie; you gotta keep your influences fresh. 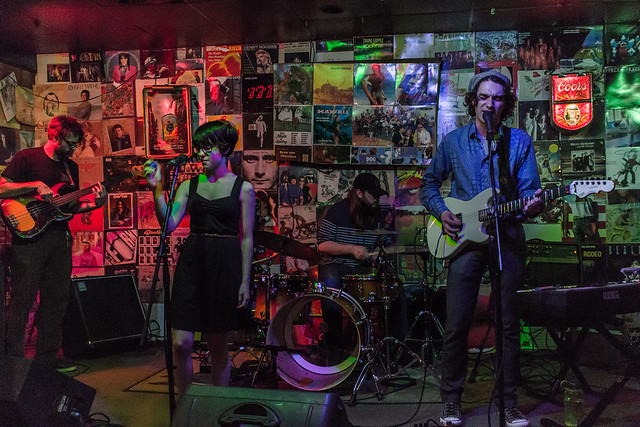 HN: Your music seems very cognitive in nature, incorporating themes like perspective and identity in relation to larger issues. What draws you to such depth? How does that play out in the process between conception and final composition?

MG: I want to make stuff that is going to resonate with people and the only way I can think to do that is to be honest in my music and hope that that honesty strikes a chord in people’s hearts. I aim to empathize and I hope to garner others’ empathy in return. So when you listen to my album, it’s really just a therapy session for me, haha. I’d like to think it could serve as therapy for someone else too. I know that music can do that. I also like to write about the mundane things in life because I believe they’re really the true enemies hiding in plain sight. Take a track like “Sometimes There’s Nothing to Say, Sometimes There’s Nothing to Do” from my last album. It’s an eight-minute long song about boredom, and that might sound silly but hey, no one likes being bored, and I’m here to tell you, you’re not the only one. Someday I’m gonna write a song about the stress and despair that comes with looking for heating instructions on a frozen dinner box.

HN: You have spoken with Hear Nebraska in the past about what you wanted to do with your music post-graduation. Looking back, what would you say you’ve been most excited about achieving since then and why?

MG: Well I’ve put out a good amount of music since then and that feels good! That’s all that really matters to me right now. I just want to record as much as I can because that’s where my heart is at. I’d love to get this stuff on the road, but so far it’s just been easier for me to focus on writing and making albums.

HN: Back in 2015 you covered Radiohead’s OK Computer in its entirety live.What made you decide to choose that album? What specific elements resonated with you and your own work?

MG: That was all my dad’s idea! I’m serious. He called me one day, it was summer 2015, and he told me he had just listened to OK Computer for the first time in it’s entirety and how he thought I could put together a good cover show of that album, so it happened. I called up my buddy Adam, who’s been playing in my band since 2011 and we thought of some other musician friends of ours who we thought would be interested. It came together really quickly and easily. That’s the power of music right there. I had a lot of fun playing those songs with those guys. It was humbling.

MG: It tells the world our story. Where we’re from. When I lived in Chicago, people at my work would give me a hard time about Omaha, giving me the whole spiel about “Do you guys still commute with horse and buggy?” and stuff like that. Most people just don’t know what goes on here but you live here and you see there’s a lot. There’s live music going on every night somewhere in Omaha and Lincoln and it’s not quite to the point where it’s too much yet. I’ve talked to musicians out of Portland where the music scene is so crowded and it’s hard to even get a gig and that doesn’t sound fun to me. The scene here is just so accepting. It’s a great place to find your voice. I think as time goes on, Omaha and Lincoln will garner more attention nationally for their music communities, but right now it feels great to be a part of something that feels like it’s rising.

New See Through Dresses and Twinsmith LPs streaming ahead of release

Two Omaha indie rock bands have LPs officially dropping on Friday, but leading up to that release date, the two records are both available for streaming now.

See Through Dresses’ new full-length, Horse of the Other World, is streaming over at Brooklyn Vegan, which accurately describes the album as “leaning harder on synths and some electronic drums and paying homage to ’80s post-punk and dream pop.” It’s not quite the urgent intensity of the band’s End of Days EP, nor is it the ethereal atmosphere of its self-titled debut, but Horse of the Other World strikes a nice balance between the two while introducing some new sounds into the fold. The LP drops on Friday on Tiny Engines, and be sure to catch See Through Dresses’ album release show at The Waiting Room on Saturday night. RSVP here.

Stay Cool, the anticipated follow-up to Twinsmith’s 2015 full-length, Alligator Years, is now streaming at Under the Radar. While Alligator Years blasted listeners with in-your-face fun and bliss, Stay Cool scales things back a bit, fitting better accompanying a late-night, top down ride to the supermarket than a sunny day sitting on a college campus. The record was produced by Graham Ulicny of Reptar, and that band’s influence is present throughout Stay Cool, with shiny synth keys and grand choruses dominating tracks like “Hug Me” and “Boji.” Give Stay Cool a listen before it drops Friday on Saddle Creek, and check out the band’s album release show July 28 at The Slowdown. RSVP here.

Although they haven’t released any new music this year, The Ambulanters have still kept themselves busy. They toured the Pacific Northwest from May to June and, on March 11, they stopped by the Horseshack studio in Davenport, Iowa, to record a set of tracks for Daytrotter.

The Lincoln post-rock quartet’s  resulting session is now available for streaming via Paste Magazine. The four-song set featured a pair of tracks from its 2016 debut EP, Leave The House, while also debuting two songs: the doomy “Luvrboi” and the reflective rager “Narcissus, Charmed.” Have a listen to the session for free over at Paste or join Daytrotter to listen to the session offline.

Photo Coverage: Mad Dog and The 20/20s Album Release show with No Thanks

Lincoln ska punk band Mad Dog and The 20/20s released their debut full-length, Things We Should Have Said (But We’ll Dance To Instead) to Bandcamp last Friday, and they celebrated Tuesday night with an album release show at Duffy’s with Omaha post-punk four-piece No Thanks. HN multimedia intern Emma Petersen joined the packed Duffy’s crowd to catch the action. Check out her photos below. 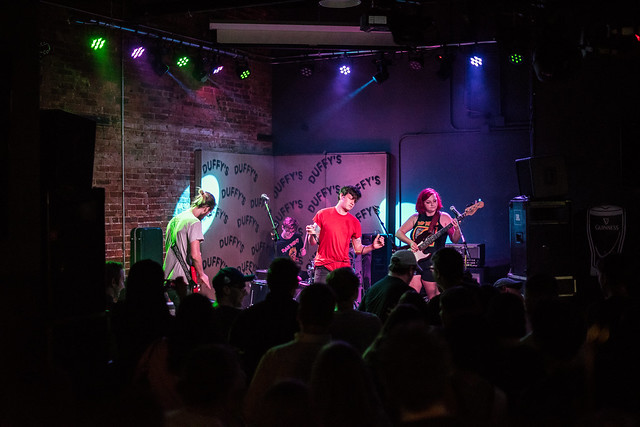 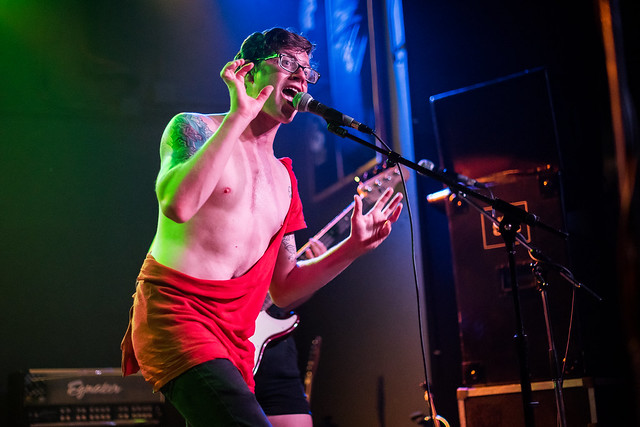 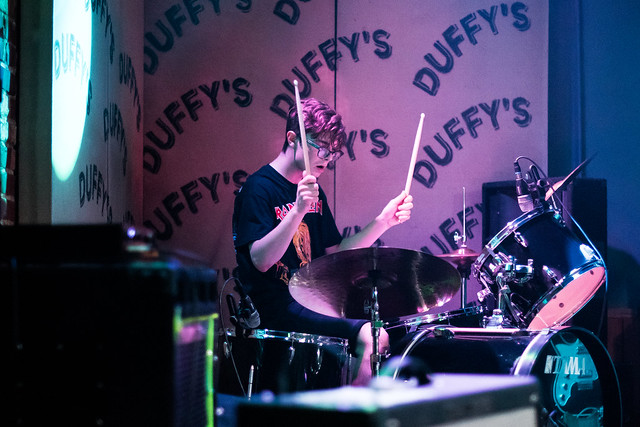 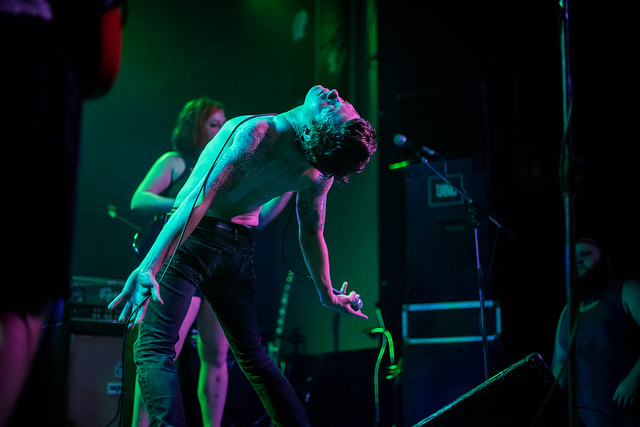 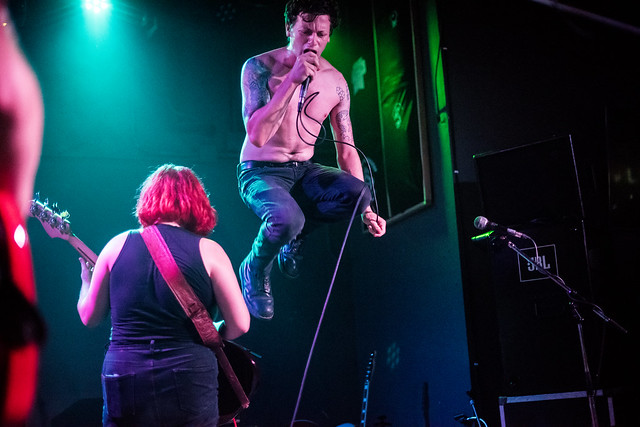 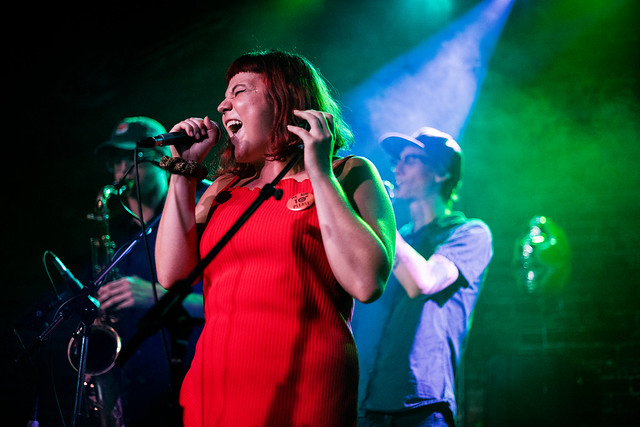 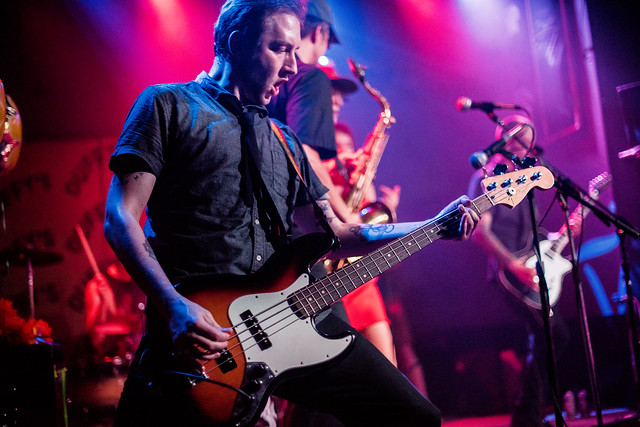 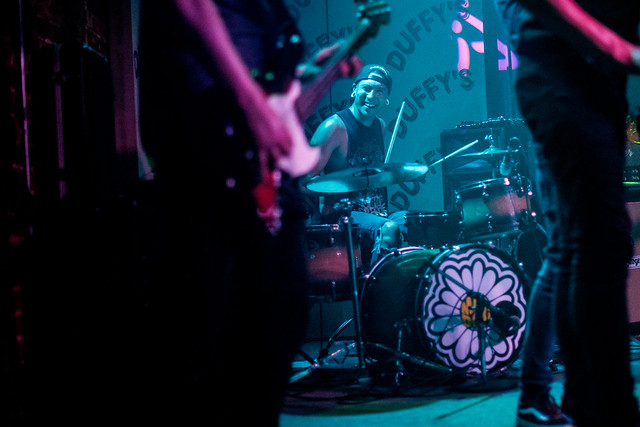 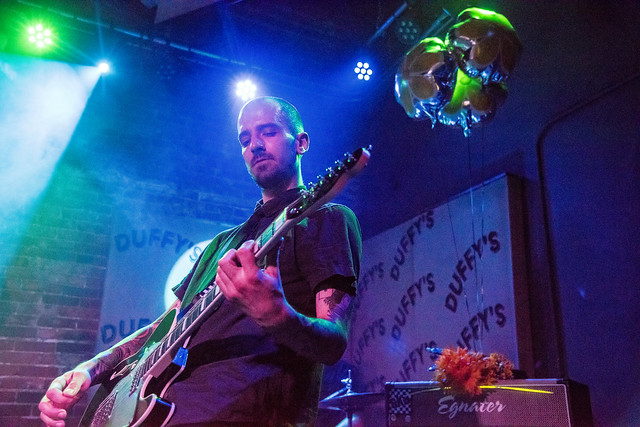 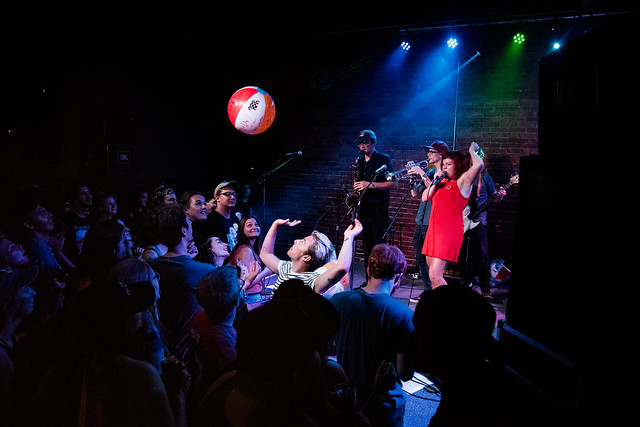 Give a listen to “The End” from Mad Dog’s new record below, and head over to Bandcamp to listen to the full-length. 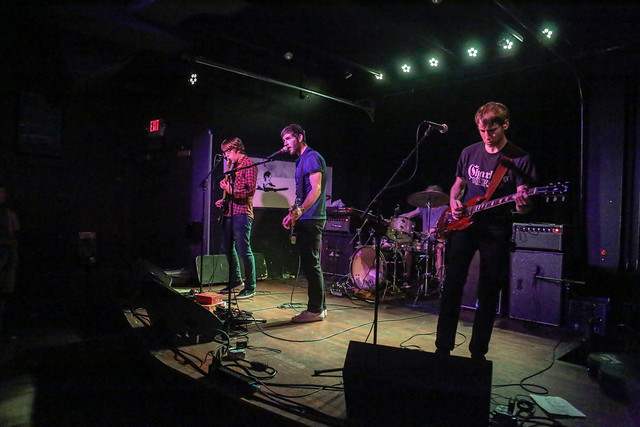 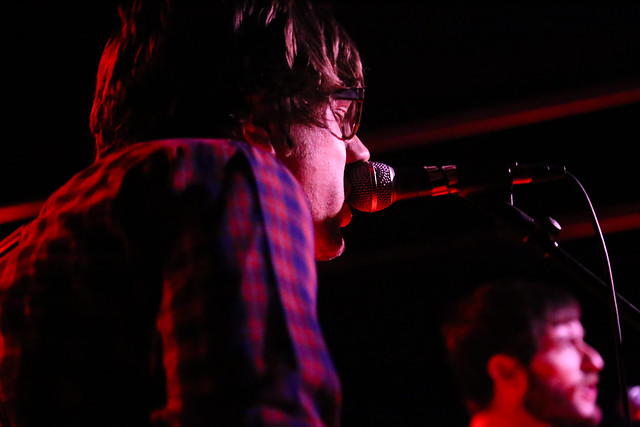 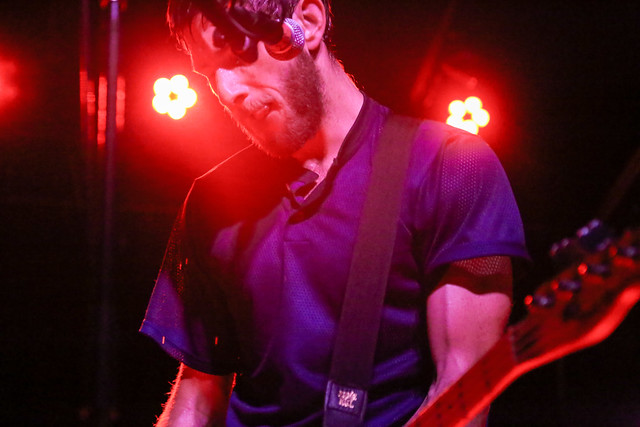 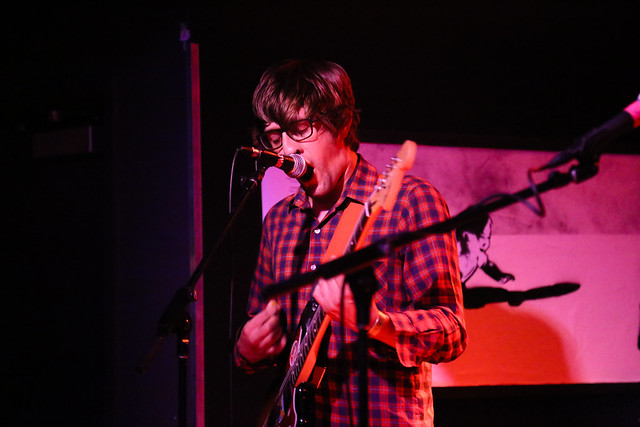 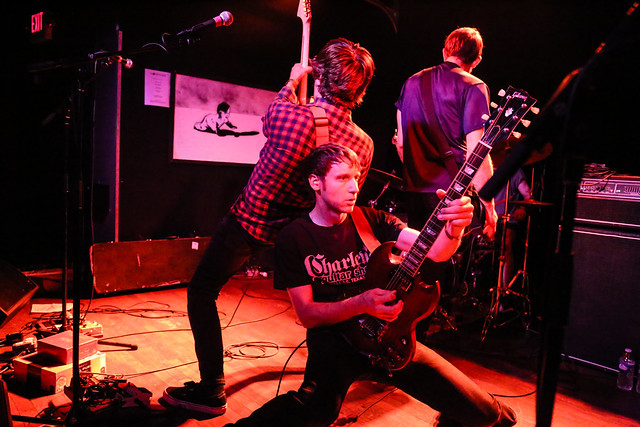 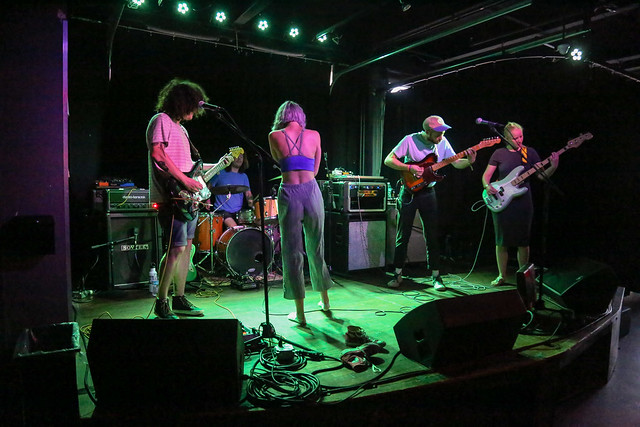 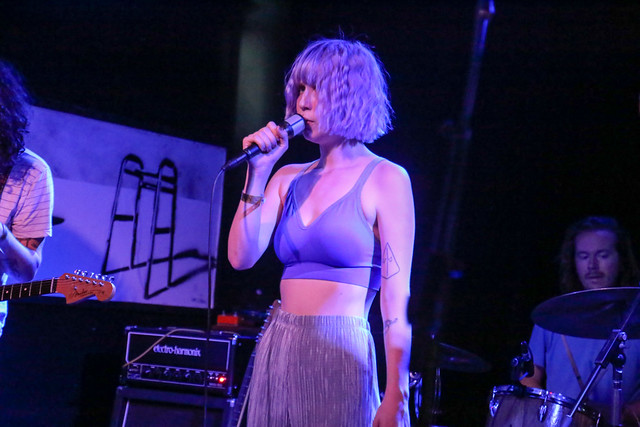 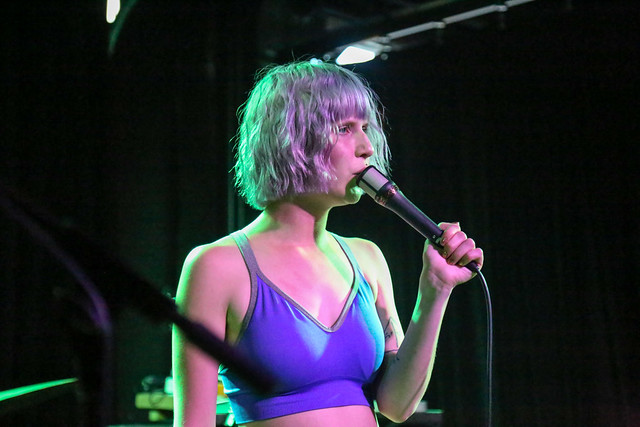 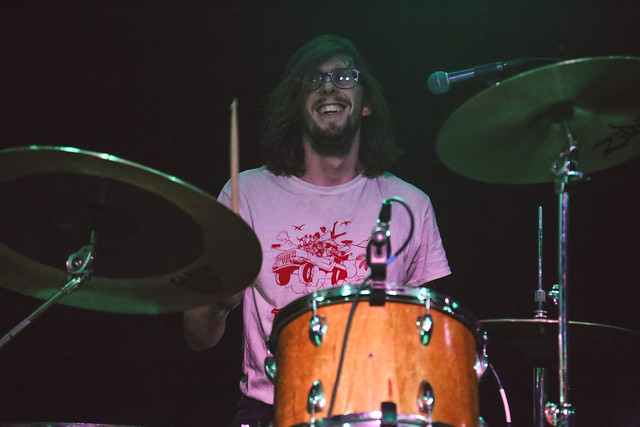 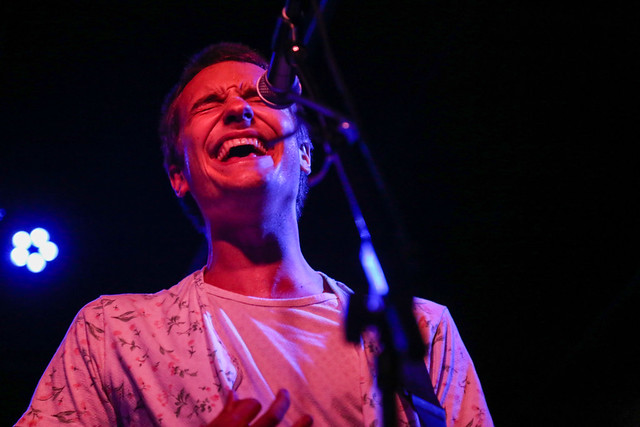 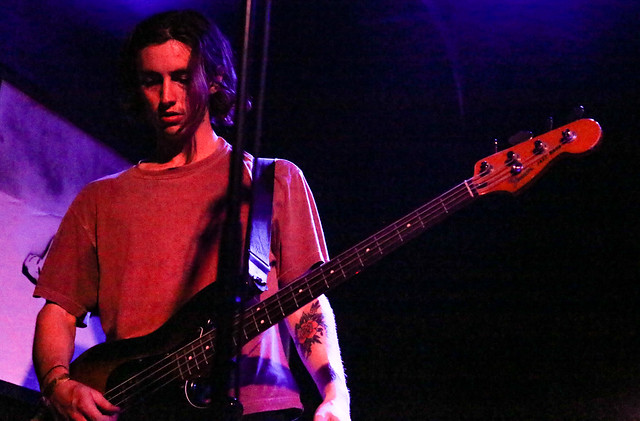 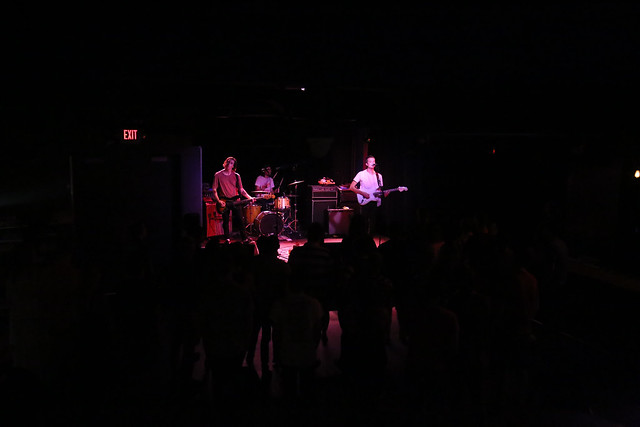 Escape those midweek blues with a show or two, and take a look at our picks below. Find a fuller list of shows on our events page here, add your own events to the page using our contribute feature and tell us which shows you’re headed to in the comments.

Esmé Patterson with The Hottman Sisters at Reverb Lounge – It’s been more than a year since Portland, Oregon, songwriter Esmé Patterson dropped her third studio album, We Were Wild, last summer, and she’s wrapping up a summer tour with a show tonight in Omaha and Thursday night in Kansas City. Omaha sister duo The Hottman Sisters are just returning from a lengthy tour of their own, and they open the show tonight at Reverb. 8 p.m. $14. All ages. RSVP here.

KZUM Stransky Park Concert Series with Bernardus – Lincoln indie folk quartet Bernardus ushers the Stransky Park Concert Series into its final month, hitting the gazebo stage Thursday night after playing live on KZUM on Wednesday morning. The band recently came out with its first music video for the song “Asleep”, which you can watch here. 7 p.m. RSVP to the free, all ages show here.