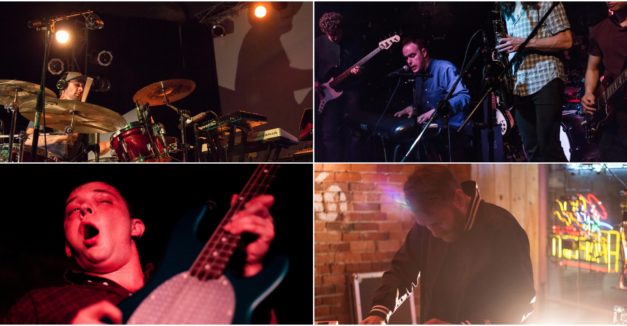 This Week In News …

Before we get to the weekend, catch up with this week’s news here, featuring:

There’s a ton going on this weekend. Below are a few to-dos. See a full schedule via our statewide calendar here. If you do not see your show or one you plan to attend, leave it in the comments or email us at news@hearnebraska.org.

HLN 12 – Concert promoter Dustin Dohrman and his company High Lucy Nation celebrate 12 years with three days of music. Tonight, Colorado producer VibeSquad headlines the pre-party at Bodega’s Alley. The main event is Saturday at The Bourbon with Wookiefoot, That 1 Guy, Linear Symmetry and more. It starts at 8 p.m. and is open to 18-plus. The (post) party continues back across the street Sunday with Eliot Lipp and Freddy Todd. Pre-party tickets are $15, main-event tickets are $25; find them here. RSVP here.

Last year, we visited with Dohrman about his concert booking and promoting experience and working together for jam and electronic music. Read it the Q&A here.

mc chris, MC Lars, Mega Ran at The Waiting Room – Libertyville, Illinois rapper mc chris comes to Omaha, bringing an arsenal of nerd rap with him. You might have also seen his work as a writer, actor, songwriter and animator for Sealab 2021, The Brak Show, Space Ghost Coast to Coast and Aqua Teen Hunger Force. $16 in advance, 8 p.m., RSVP here.

Relax, It’s Science, Stronghold, Altura at The Barley Street Tavern – Omaha instrumental band Relax, It’s Science just recently released a new EP, Paranoia, two-thirds of which (“Paranoia Will Destroya” and “Look How Churchy We Can Get … Pretty Churchy Right?) was originally written to score a friend’s play. They tracked with Lodgings’ Bryce Hotz at his Archetype Studio. The show is at 9 p.m., $5, 21-plus. RSVP here.

Mr Little Jeans, TRACE, Rothsteen at Slowdown – Indie pop singer/songwriter Monica Birkenes is Mr Little Jeans, the Norway-native producer who rose to popularity partially through a cover of Arcade Fires “The Suburbs.” She has been compared to the likes of Lykke Li, Robyn and Annie. Her debut album Pocketknife was released in March 2014 on Harvest Records. 8 p.m., front room show, $15 in advance. RSVP here.