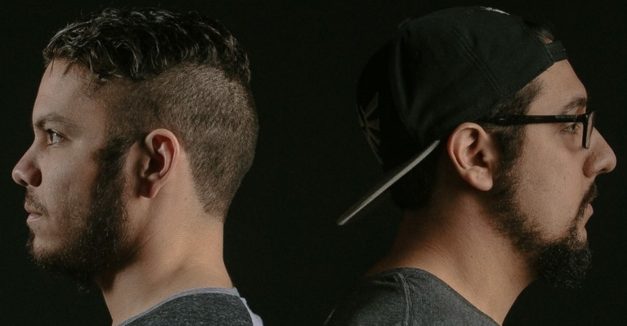 In the thick of an emotional struggle or crippling doubt, the goal we lose sight of is also often the strongest antidote. Finding some self-affirmation can help crack the wall long enough to let light in. As Skyloft’s Anthony Flakus sings on the duo’s new album, all that pain wasn’t for naught.

“Remember Why” might not explicitly be about Skyloft itself, but you could certinaly interpret the soaring anthem — which premieres today via Hear Nebraska — as its own stab at self-affirmation. Flakus and drummer/percussionist Tyler Lewis started the electronic project in July 2015, and have quickly garnered local attention through its vast soundscapes and earnest lyricism, all in service of eliciting emotion. It’s no wonder the band quotes Carl Jung on music being “an innate drive that seizes a human being and makes [them] its instrument.”

If “Remember Why” explicitly incites strength, then it’s beat drops and hooks do so implicitly. Grand piano chords and pulsing synth give way to hand claps and burning bass until the beat drops, rounding out with an epic final chorus a la Bastille.

That wide-open sound has netted the band a “Best New Artist” nomination for this year’s OEAA and a subsequent spot on its showcase this past October. The new track appears on Skyloft’s forthcoming debut album Re: Alive, which drops Friday, Nov 11 at a release show at Reverb Lounge with Here/After, The Fat Timmys and Emily Ward (RSVP here).

Listen to “Remember Why” here.

Lincoln rock band This Machine Kills Vibes is back with new music, releasing EP 20 Hours yesterday via its bandcamp page. It’s the first new album for the now-four-piece band since last August.

With its latest entry, This Machine Kills Vibes continues to build sonic depth upon its driving, reverb-drenched dream rock. The addition of guitarist Alex Steele (Better Friend, King Thumper) to an already tight trio — guitarist/vocalist Spencer Krull, bassist Robert Specht and drummer Marshal Fisher — is felt most strongly on the album’s lead track “Crown” while his second guitar bolsters the revamped “Burden Of Proof,” which appeared on the band’s prior EP.

And all the familiar elements are there. Krull is as starkly forthcoming about his own faults as when identifying them in others, singing matter-of-factly like a flagpole-ascending Harvey Danger but with a touch more reservation. Specht provides the meat of the rhythm section while Fisher shines brightly throughout, most noticeably and furiously on “These Blue Skies Get Old.”

This Machine Kills Vibes returned to live action this past September for Porchfest LNK, and will again Dec 1, when it joins Minnesota’s Victor Shores, Super Ghost and Better Friend at Milk Run (RSVP here).

Listen to 20 Hours below:

You know when you’re pacing through the aisles at your favorite record store, and those bands with a six-plus album discography inevitably have a string tribute album in their name? Someone has done that to Digital Leather.

That someone is Ian Aeillo, working solo under the moniker Flight School. He dropped seven reimagined tracks from the synth punk project of Shawn Foree last week via Bandcamp. Aeillo says it took about a week’s worth of effort at his home workstation, after which he wanted to release them “before I forgot about it.”

“I did this because Digital Leather is such a part of all of us and I wanted positive attention from Shawn Foreè and I was looking forward to people asking me to do more records like this and to tell them no,” Aeillo says via email.

Without context, the seven-song output could serve as the soundtrack of an adventure RPG a la Legend of Mana. There’s tension and pluck where there would otherwise be burnt synth and fast percussion. Dig in closer, and you can hear the harumph in “Studs In Love” and (an albeit gentler) neurotic syncopation in “Volcanoes.”

Oh, who am I kidding; there is literally nothing like hearing it yourself. Find it below.

Tonight, prog rock/jazz fusion band Sand comes to O’Leaver’s, 1322 S Saddle Creek. Led by vocalist/percussionist and former Cursive drummer Dylan Ryan, Sand pushes the boundaries of jazz through Ryan’s stylistic drumming, meshing it with elements of Sabbath-style metal and fluid time signatures. Watch the trio in the latest episode of Love Drunk below. Chemicals and Arc Flash open the show. The show is $5 and starts at 9 p.m. RSVP here.

Musicians: have an upcoming release, touring news or other goings on to share? Email news@hearnebraska.org