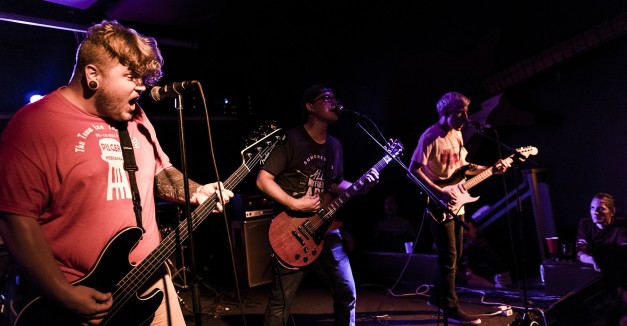 We are sorry to announce this morning that Omaha musician Alan Mansfield has passed away.

Mansfield was a figure in the Omaha music scene for years, playing guitar in longtime rock band Witness Tree. He is remembered fondly by many in the music scene, and our hearts go out to his family and friends.

If anyone would like to share thoughts or memories of Alan, please feel free to reach out at andrews@hearnebraska.org.

It has long been known that See Through Dresses would release an EP this year, but it’s new label, Tiny Engines, has made the official announcement.

The Omaha band has already finished the six-song End Of Days EP, which will drop this fall. It features songs from the regular live rotation, including “Little Apple Rot” and “End of Days.”

See Through Dresses also tacked on a handful of late-August tour dates, playing a Chicago stop with The Good Life and Big Harp. Before that, the band spins through the midwest with Cymbal Eat Guitars.

Never ones to rest on their laurels, Lincoln punk quartet No Tide is set for another round of touring.

The band announced a slate of early September dates with Austin, Texas hard rock band Thieves. Tour will take them down through Oklahoma and Texas and swing back up into the midwest.

No Tide seems to perpetually be on the road in support of it’s debut full-length Death Of The Sun, released in June on Massachusetts punk label Take This To Heart Records. We visited the band at practice earlier this month and chatted about the new record and about touring to stay relevant (read that feature here).

The Holland Performing Arts Center has invited an Emmy and Tony award winner to help celebrate its 10-year anniversary.

Actress and singer Kristin Chenoweth headlines the Celebrate 10 Concert on Oct. 16 at the Holland Center. Other acts include Opera Omaha, Ballet Nebraska, the Omaha Symphony and Salem Baptist Church, as well as participants from the Nebraska High School Theatre Awards program.

This will be the first of two nights celebrating a decade of programming at the Holland Center, as well as ten years of partnership with Omaha Performing Arts. The following evening, Conor Oberst headlines the daylong Holland Stages Festival.

Chenoweth received an Emmy in 2009 for Best Supporting Actress in a Comedy Series, playing Olive Snook on the ABC series Pushing Daisies, as well as nominations for her work on Glee. Broadway lovers know her for originating the role of Glinda the Good Witch in Wicked, which earned her a Tony -Award nomination. Chenoweth won the award in 1999 for her roll as Sally in You’re A Good Man, Charlie Brown.

TIckets to the Celebrate 10 Concert go on sale Monday, Aug. 3, and start at $60. For more information, head to TicketOmaha.com, or stop by the Holland Performing Arts Center box office.

Tonight at 5 p.m., the Railyard stage will hold the final installment of Downtown Lincoln Association’s Summer Blend concert series. Lucas Kellison and the Undisco Kids will perform for the happy hour crowd. We spoke to Kellison in June on the cusp of his new LP, Bizarro Love, which can be read here. RSVP here.

Later, Vega hosts Ft. Worth, Texas southern rockers The Quaker City Nighthawks. Fans of the FX drama Sons of Anarchy have probably heard a few of the band’s songs, as it contributed a couple of tracks to the long-running series. Entry is $8 at the door. RSVP here.

For a fuller list of shows — including We All Stars: Omaha Hip-Hop Then And Now at The Waiting Room (RSVP here) — head over to hearnebraska.org/events for our statewide calendar. As always, please feel free to reach out via news@hearnebraska.org with shows, news tips and story ideas.