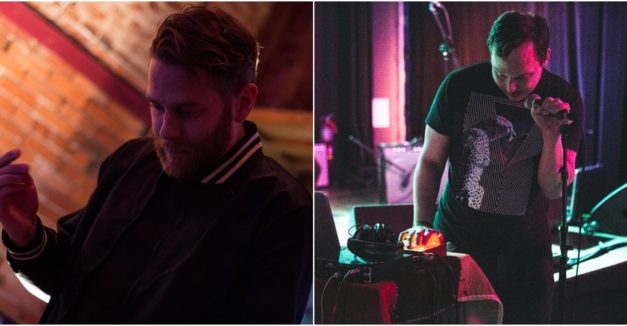 During the past year, ridgelines and Big Slur have carved out their own, contrasting electronic styles. In collaborating for a new release, they’ll meet somewhere in the middle.

The pair of Omaha acts have recorded a limited-run split cassette, which drops at a show this Saturday at Almost Music, 3925 Farnam St. Each artist (Mike Johnson as ridgelines, former Deleted Scenes frontman Dan Scheuerman as Big Slur) created a single track that spans their respective sides of the tape, of which Johnson says there are maybe 25 copies.

For Johnson, it represents a departure from dense two minute bursts found on his initial EPs. A prior collaborator with the likes of Both’s Scky Rei and poet Jade Lacy, he taps another sharp lyricist in Lincoln’s Sleep Sinatra.

The tape is also a rare opportunity to have anything Big Slur in physical form. Heretofore, Scheuerman’s wide, improvisational swaths have lived on YouTube or at experimental music series like O’Leaver’s FITNESS and Milk Run’s CounterSOUND.

Listen to two samples of ridgelines’ side below.

Earlier this month, The Faint announced career retrospective album CAPSULE:1999-2016, out digitally Sept 30 and on double-LP Oct 28 on Saddle Creek. Last week, it shared the video for a second new track “Skylab1979.” The video compiles old tape from outer space into a static-laden supercut.

Watch it below, and find upcoming tour dates here.

Sometimes simply being heard is the toughest part about playing in a local act. Four Omaha acts have banded together under one fledgling music cooperative in order to overcome it.

The group is called Veer Music Co-op, and this Saturday it will release its debut compilation at a show at The Sydney. It features individual tracks by Anthems, The Superbytes, Clear The Day and The Trashman.

Veer Music Co-op was started by Clear The Day frontman Mark Gregory, who was simply looking for a way to put more heads together. In addition to contributing music, each act is involved in some other way: The Superbytes’ Eric Hayes and Anthems’ Mim Aparo serve as consultants. Other collaborators include graphic/web designer Brandon Engel, logo creator Chris Soriano, promoter Brett Gulbrandson of Aorta Music and The Sydney’s Heather Tedesco.

This Saturday’s show starts at 9 p.m., with $5 entry, which includes a digital or CD copy of the compilation. It is also available via Veer Music Co-op’s website. RSVP here.

Tonight, Portland’s Tender Age comes to Reverb Lounge, 6121 Military Ave. The five-piece is on a nationwide tour in the wake of its March 2016 release Disappear Here. We published a Q&A with the band, courtesy of See Through Dresses’ Sara Bertuldo, yesterday. Read it here. Omaha’s Slow Stoics and The Hussies open the 9 p.m., all-ages show. RSVP here.

And in Lincoln, its $1 Beer Night at Duffy’s Tavern. Laughing Falcon and Night Push take the stage. Entry is by donation, so remember to use that money save on cheap tall-boys. RSVP here.

Plan your week in concerts with our statewide calendar here. Send all news tips, story ideas and HN Radio song submissions to news@hearnebraska.org.