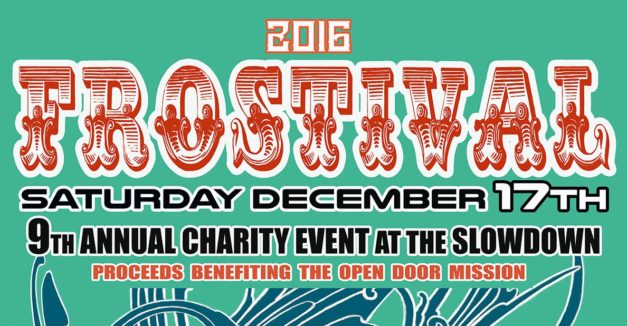 The Rad Kadillac concert booking team has announced some familiar faces will appear this weekend at its annual charity event.

In addition to the aforementioned festival mainstays, Frostival will also see performances by DJEM and the Midland Band. It also features a pair of cover sets by Pink Floyd tribute band Floyd and Rock and Roll Suicide, which will play from the extensive catalogues of David Bowie and Prince, in honor of both artists’ deaths this year. For its part, Blue Martian Tribe has played all nine editions of the festival.

Frostival 2016 tickets are $15, or $10 with the donation of an unwrapped toy or five cans of food. Doors are at 6 p.m., and the show is all-ages. RSVP here for more details and the concert schedule.

HN Radio is fresh at the top of our webpage today, and it carries a load of new music and recent live performances.

In addition to a pair of tracks each from Andrea von Kampen and Walk By Sea (both of whom recently joined Hear Nebraska FM live in the KZUM studio), HN Radio features new music by recent Unbeaten Records signee Purgatory, indie pop outfit Head of Femur and Omaha emcee Mark Patrick.

Other highlights include new singles by Pure Brown, Eric In Outerspace and Smith’s Cloud, as well as a cut from Omaha-native Terrace Martin’s Grammy-nominated album Velvet Portraits. All three have upcoming shows: Martin plays Hi-Fi House this Saturday, Dec 17 (RSVP here) with his father Curly and a host of great musicians; Eric In Outerspace opens for Little Brazil and Criteria Friday, Dec 23 at The Waiting Room (RSVP here); and Pure Brown plays Duffy’s Tavern the day before with Cleveland group Wanyama and DJ Blac (RSVP here).

Stream the full playlist below or at the top of the website.

Musicians: have new music to send for HN Radio consideration? Email us at news@hearnebraska.org.

Tonight, New York-based rapper R.A. the Rugged Man comes to Lookout Lounge, 320 S 72nd St, while on tour with Los Angeles emcee AFRO. R.A. the Rugged Man has been at it since 1992, when he signed with Jive Records for his debut album, Night of the Bloody Apes, which was never released. Throughout that time, the rapper has worked with the likes of Notorious B.I.G., Mobb Deep, Chuck D and Tech N9ne. Additional acts for tonight’s show include Noizewave, Travis Finch (of Finch x Kovacs) and J. Crum. 8 p.m., all-ages show, $18, RSVP here.

Also tonight, Lincoln acts Unmanned and Red Cities play Duffy’s Tavern Dad’s $1 Beer Night with Wichita, Kan., band Kill It With Fire. If you missed it, Unmanned (formerly Powers) released its sweaty, precise, long-awaited rock album Night Friends earlier this year. Red Cities joined Hear Nebraska FM in August to talk about its own recording efforts, which it expects will bear fruit in 2017. The show starts at 9:30 p.m. and, as always, is by donation. RSVP here.

Check out a fuller listing of shows for tonight and beyond at our statewide calendar here. Send all news tips, story ideas and other goings-on to news@hearnebraska.org.