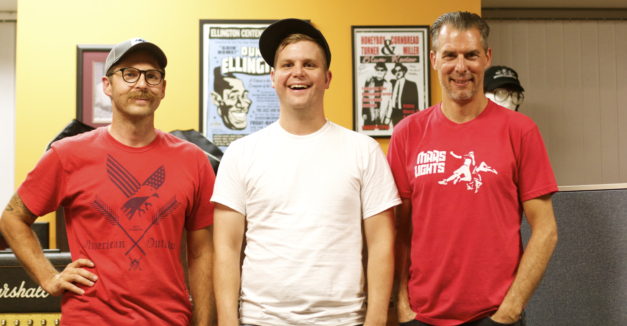 [The following transcript was read live on-air in the KZUM studio before Red Cities’ appearance on Hear Nebraska FM. Read on, then listed to the band’s performance and interview.]

It’s been almost three years since Red Cities came on the air with us, introduced by my former co-host as the band that could soundtrack a barfight.

The analogy still plays: the Lincoln garage rock quartet packs a loud, careening punch that bores forward as vocalist Byron Anway’s high-pitched wail serves as its warning signal. And of course, if you’ve seen them recently count them still among the loudest, rowdiest-sounding bands in Lincoln. I caught them recently at The Bay’s grand re-opening, and maybe because of the setting, all I could see were skate videos, handrails, concrete and pain.

But what has happened in the meantime? Quite a bit! Last time Red Cities and HN FM met, the former was barely a year old, backed separately by more than 30 years of experience but still gelling as a group. Its self-titled debut in 2014 cemented its wild, volatile sound, littered with politically charged tracks that could shift and accelerate at their driver’s will. And you can still find them on billings with other local heavyweights in Domestica, Bogusman, Laughing Falcon and Unmanned.

Perhaps most notably, and what you’ll hear tonight, is a vocalist in Byron Anway that has shaded more into manic territory. The band cut a series of demos at Fuse this past March — what will next summer become a full-fledged album — and the rough cuts are sharp with critique. Anway sends up collegiate bro-culture and grapples with his own fuzzy brainspace. He wasn’t kidding when told HN in a video interview last year:

“Just between you and me, I’m an *effing freak.”

Tonight, they’re down a member, bassist Eric Aspengren, for reasons we’ll get into later. But don’t expect things to be stripped back, even with Matt Bokovoy on bass and especially not with drummer Josh Leeker pounding away. Rather, brace yourself for the tightly balled-up fist of fury.

Special thanks to Brent O’Neill for engineering sound.

Friday, Aug. 19 at The Commons with Producers of the Word (all-ages)
Saturday, Oct. 8 at Duffy’s Tavern for Lincoln Calling
Thursday, Oct. 27 at Vega (in the Railyard) with Briner and Dark Satellites