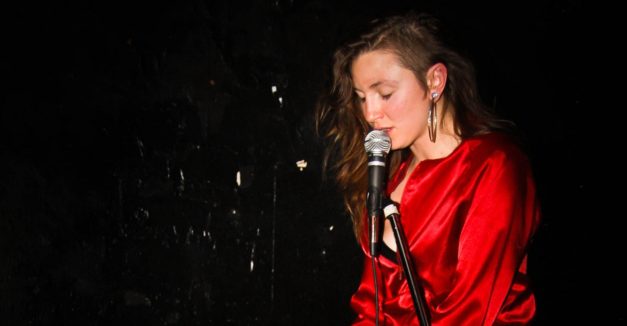 Lincoln-native musician believed to be among Oakland fire victims

We are saddened to learn that Lincoln-native, and Nebraska music community member, Nicole Segrist is believed to have been among the victims of the Ghost Ship fire in Oakland. Her name has been listed among the missing on a Facebook page for families and friends of victims.

As a Lincoln resident, Segrist — who went by Denalda Nicole Renae — was a highly active and beloved member of its music scene, most recently performing as electronic project Vanfantom. She was also in the band Two Black Cats with Bryan Klopping, Amy Gordon and Sam Segrist, as well as The Heroic Little Band of Rebels with Travis Beck and Ian Egenberger.

Our hearts go out to her family and friends, and to all those affected by the tragedy. If you would like to share thoughts on Nicole for publication, reach out to news@hearnebraska.org

The nominees for the 59th Grammy Awards were announced this morning, and one accomplished Nebraska-native is among them.

Jazz musician and producer Terrace Martin’s new album Velvet Portraits is up for Best R&B Album, included amongst efforts by Lalah Hathaway, Mint Condition, BJ The Chicago Kid and Mya. It isn’t Martin’s first, having worked on Kendrick Lamar’s decorated To Pimp A Butterfly last year. However, it is the first nod for one of his own works, which features guests like Kamasi Washington, Robert Glasper, Marlon Williams and Thundercat.

“I am proud and honored to work beside Terrace, Curly and Sput,” Carson said Tuesday. “Making this record was a dream come true, the fact that a lot of it was done in Omaha is something I think we all should be proud of.”

Both Martins and Seawright will be reunited for two performances at Hi-Fi House on Saturday, Dec. 17, along with Dominique Sanders and Cynthia Taylor. Find tickets for the 8:30 p.m. and 10 p.m. shows here.

Photos from Progfest 2016 at Lookout Lounge

Catching up from the weekend, first time contributor Michael Bell was at Lookout Lounge this past Saturday for ProgFest 2016. Bell submitted photos of Low Long Signal and Human Teeth Parade, which can be viewed below:

In show news, Omaha trio Millions of Boys has been added to this Thursday’s show at Lookout Lounge, which also features Oquoa and Connecticut rock band Hellrazor.

Hellrazor, which is fronted by Speedy Ortiz drummer Mike Falcone, just released a full-length album Satan Smile on Nov 4. If you missed it, Oquoa also has new music out via its debut EP In Oneir. Millions of Boys revisited things just before Thanksgiving at O’Leaver’s.

Applications are open for Omaha Creative Institute second-year Community Supported Art program, and the nonprofit is holding an information session for artists this evening for all interested artists.

Modeled after a similar community-supported Minneapolis program, CSArt Omaha will grant funds to each artist who applies for and is accepted into the program. Each artist — working in all mediums including visual artists, musicians, writers, performing artists — will produce works of art to be shared with the community and for interested shareholders, who invest in the projects in advance.

This year, there are two support levels. Artists at the regular patron level will receive $1,500 to create 50 works of art in multiples. The Collector Level artists will receive $2,000 to make 10 original works. Both will receive five months to create the work.

Tonight’s info session starts at 6 p.m. at Omaha Creative Institute, 1516 Cuming St. RSVP here. The application is open through Dec 30 and can be found here.

Head to our statewide calendar here to plan the rest of your week in shows. If we’re missing something, email us at news@hearnebraska.org. That goes for all story ideas, news tips and song submissions for HN Radio.