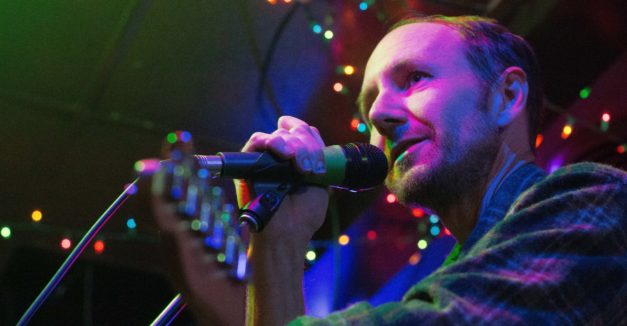 The defeated look on the face of the protagonist in Jake Bellows’ new video probably feels familiar. Dread overcomes him in the face of monotony before he has even risen from bed. As the sign at his desk says, a person can stand anything except a succession of ordinary days.

“Little Bird” — a reverb-laden, previously unreleased track which premieres today — depicts the man’s closed loop of days as a self-constructed cage. He goes to work. He watches television. He sees a group of young people at the bar and searches for his own lost joy. To the Omaha native singer/songwriter, it’s a relatable feeling for anyone stuck in a rut.

“Aren’t we all small weak birds in imaginary cages?” he says.

Hopelessness comes to a head in the final scene as the subject drives out of town. Watch “Little Bird,” directed by Martin Kenna, below:

Omaha singer/songwriter Tim Kasher recently appeared on the Washed Up Emo podcast in support of his new record No Resolution. Podcast host Tom Mullen asks the Cursive frontman about his beginnings with the acclaimed band, growing up in the Omaha music scene and starting a record label with his bandmates.

Kasher released No Resolution, his third solo album, on the band’s new 15 Passenger label and is currently on a European tour. Our On The Record podcast team called the record perhaps his most ambitious solo work yet; listen to the review here.

The Washed Up Emo podcast focuses on post-hardcore and emo music of the 90s and early 2000s. The podcast has also featured the likes of Tigers Jaw’s Ben Walsh and Bayside’s Anthony Raneri, as well as many other musicians who were acclaimed at the time of emo popularity.

Listen to the interview here.

Whether you’re a visual artist, musician or performer, Omaha Creative Institute is looking to support your project.

The arts organization has announced it will award a Creative Artist Grant for $5,000 to support an Omaha area endeavor. The application is open to artists in all disciplines who live within 100 miles of the metro area and whose proposed project includes “an aspect of public impact” — that is, open or accessible to the public in some way.

The grant, founded last year using funds from OCI’s Omaha Gives campaign, is part of the organization’s mission to build an audience for the arts while supporting local artists.

“OCI is committed to bringing more opportunities for artists to the Omaha Metro,” OCI said in a statement. “We believe the backbone of a thriving city is a supported art community, where artists can dream big.”

Last year, OCI awarded its first grant to The New Philharmonic in support of its “B Is For Bikes” project, which was part two of a 26-year performance art project that spans the alphabet.

Applications are open now through April 14. Recipient (or recipients) will be selected by jury an announced in May. Apply here.

The lineup features 16 Iowa acts including frequent Nebraska visitor Halfloves and singer/songwriter Good Morning Midnight, who played Yia Yia’s in February. The festival will also host a musician workshop which will cover topics like creative efficieny, expanding audience reach, creating a marketing plan and developing an overall better quality of life as a working musician.

RSVP to the festival here.

Tonight, Portugal. The Man plays at Slowdown with Brooklyn hip-hop act HDBeenDope. The Portland band recently released a music video for it’s song “Feel It Still,” and is working on a new album themed around the current political climate. Synth player Kyle O’Quin said in an interview that the forthcoming album is dark and is heavily influenced by hip-hop. Tonight’s show is all ages and $27. RSVP here.

Also tonight, experimental black metal band Deafheaven plays The Waiting Room tonight with post rock band This Will Destroy You and singer-songwriter Emma Ruth Rundle. The now LA-based Deafheaven is known for its unique combination of black metal, post rock, and shoegaze. HN recently spoke with frontman George Clarke about his relocation to Los Angeles and the band’s latest album New Bermuda in a recent Q&A. Tonight’s show is $18 and all-ages. RSVP here.

For news tips and story ideas, drop us a line: news@hearnebraska.org.