Before we get to a big weekend, here are a few of our recent stories and features that we think merit your attention, in case you missed them:

Hear Nebraska Merges With The Bay – That’s right: after a friendly, collaborative relationship since each organizations’ founding in 2010, the two announced their joining together as new company Rabble Mill Nov. 30 and sealed the deal in front of friends and family this past Wednesday. Read about what we have planned here and visit RabbleMill.org. (Note: this column was a doozy, with an album announcement from Omaha-native Anna McClellan and Tim Kasher ranking the entire Cursive discography. The Ugly Organ was not number one.)

Sara Bertuldo, Simon Joyner talk to Lazy-i – Two Omaha musicians address the most visible controversy in the city’s music scene — cultural appropriation and use of racial slurs — with Lazy-i blogger Tim McMahan. Bertuldo penned an essay denouncing said usage and laying out why it is harmful. And in an email interview, Joyner defends his song “As Long As We Are In Danger” and rails against having the conversation via social media. Summary, essay links and more here.

The Plain Mosaic releases debut album Heartland Shakedown – Last week, we reviewed the latest release from the experimental/progressive-leaning Yorick Studios, calling the ammalgamation of pop, rock and jazz “gorgeous by design” and “challenging and similarly rewarding.” Read more and check out the record here.

Artist Profile: Cruz Control – Cruz Control founder Cruz Salazar explains how the Kearney jam band has grown with the local scene and how it hopes to alter audience perceptions of the genre in the latest artist profile. Watch multimedia intern Arianna Bohning’s video below.

Staging Rituals: How Nebraska Musicians Gear Up and Wind Down – From sonically-guiding tarot readings to great cord untanglings, five Nebraska artists recently recreated and explained their pre- and post-show routines. View their portraits and read what gets them going here. 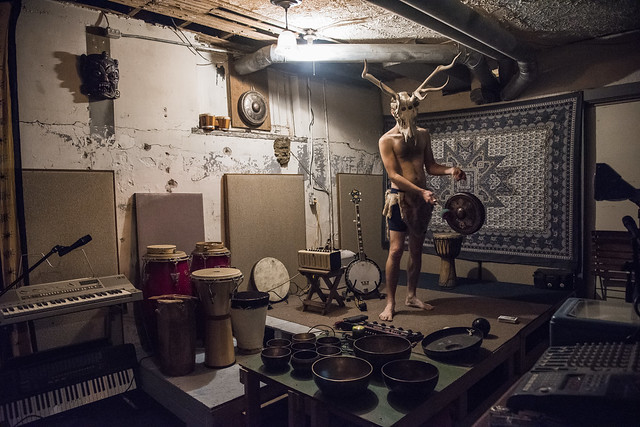 The next few days are loaded with quality shows. We list a few below; plan your own adventure with our statewide calendar here. Email news tips, story ideas and song submissions to news@hearnebraska.org. And follow along with us on Twitter and Instagram.

Ocean Black, The Lupines, Trash Kat at O’Leaver’s – This all-local show is going to be loud as hell. Lincoln’s Trash Kat announced itself in a big way at Lincoln Exposed this past February. The Lupines have been around the block, though; dig into their most recent, blistering release Eternal Wax here. 10 p.m. show, $5, 21-plus, RSVP here.

Toy Drive For Pine Ridge at The Waiting Room/Reverb Lounge – Lash LaRue & the Hired Guns throw their 14th-annual toy and supply drive, benefiting residents of the Pine Ridge Reservation, tomorrow night between two Benson venues. Frontman Larry Dunn started the charity effort in 2003 after spending time on the reservation, growing the concert from a five-act acoustic show to a two-venue affair that piles up goods for delivery mid-December. Performers include Jump The Tiger, Matt Cox, 24 Hour Cardlock and King of the Tramps at The Waiting Room; at Reverb Lounge, it’s Korey Anderson, John Henry, Vox Combo and Lash LaRue & the Hired Guns — who just dropped its first studio-recorded album on Sept. 16 after 30 years performing live. Check it out here.

Tiny Giant Media relaunch party at The Bay – Local queer artist collective Tiny Giant Media relaunches itself this Saturday at The Bay with a top-notch combo of musical acts and visual artists. Co-runners Zo Willow and Spencer Krull spoke to the Daily Nebraskan this week about bringing the label back and creating more visibility for what Krull calls Lincoln’s  “a blossoming queer scene”; read the interview here. Music starts at 4 p.m. with Zo/Laser Lotus and includes Dominique Morgan, Death Cow, The Morbs and more. See the full musician and artist lineup and RSVP here.

Hurricane Like Me album release at Slowdown – Omaha emo rock band Hurricane Like Me celebrates the release of its debut album Decisions tomorrow night at Slowdown with local acts Your Own Medicine, Save the Hero and Here/After. HLM formed in the summer 2016 and has already opened for the likes of Trapt and Drowning Pool. Hear the title track below. 8 p.m. show, front room, $8, RSVP here.

Gleemer, Better Friend, I Forgot To Love My Father, The Ambulanters at Duffy’s Tavern – Loveland, Colo. indie rock band Gleemer come through Lincoln on tour in support of its intimate, slow-burning new album Anymore. A trio of Lincoln bands in IFTLMF, The Ambulanters (both of whom are preparing to enter the studio) and Better Friend fill out the bill. 9 p.m. show, $7, 21-plus, RSVP here.

Bazile Mills at Blackstone Meatball – The Omaha folk/rock band plays the last of its Meatball residency shows Saturday. Hear “We Are The Misfits” from its 2016 EP Where We Are below. 10 p.m. show, free admission, RSVP here.

Time Burners at Gratitude Cafe – Folk duo The Time Burners play their holiday show at North Lincoln’s Gratitude Cafe and Bakery. Travis and Becky Koester punctuate perhaps one of their busiest years yet with a new album, which will drop on just the other side of the new year; see the teaser video below. 7 p.m. show, RSVP here.