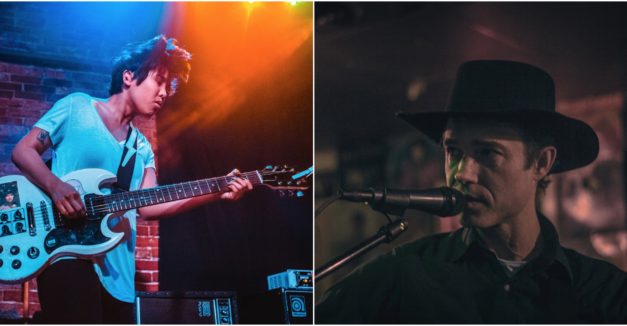 During the better part of the last year, controversy has gripped the Omaha music scene over use of cultural appropriation and racial slurs in music and, more widely, art in general. It has generated spirited conversation online and in social circles about said usage, which in turn has drawn stern criticism for its negative impact.

Two of the music community’s most prominent members have again stepped into the public forum to shed light on their perspectives.

See Through Dresses’ vocalist/guitarist Sara Bertuldo penned an essay, published yesterday by Omaha music blog Lazy-i, in which she decries the use of racial slurs by white artists. “The first reaction is anger,” she wrote in response to writer Tim McMahan’s question, sympathizing with those who have expressed the same and calling on the artists in question to reflect on their usage of slurs and the resulting damage to people of color in the community.

“I don’t believe there was intent to cause harm,” she writes. “But the fact of the matter is, you did. I believe it’s more meaningful to take a step back and listen now. Listen to us.”

Bertuldo’s essay comes as the second of two interviews McMahan conducted with scene figures involved in the fray. Songwriter Simon Joyner participated in an email exchange for the first part, which was published on Nov. 14. In it, the longtime Omaha musician defends using the N-word in his own song – “As Long As We Are In Danger” from his latest album Step Into The Earthquake — in which he assumes the voice of America in an attempt to convey the overt hatred it often displays toward minority groups and people of color. He also rails against what he sees as “the corrosive nature of social media” (where much of the larger conversation has taken place) while explaining his view that not using the word would be “letting America off the hook.”

“As long as we have people still talking that way (using racial slurs) and thinking that way, and more importantly, systems still designed to marginalize people of color, it seems important to be able to call attention to it and to use the language these people are actually using if we want to depict how vile this thinking really is,” Joyner wrote.

The issue ignited in late 2016, in advance of the revival of Harouki Zombi (warning, link contains material some may find offensive), a DJ project founded by Orenda Fink and Nina Barnes in which the pair and other participants painted their faces to emulate Japanese geishas — which many have criticized as offensive “yellow face.” It continued this summer, when Omaha musician Noah Sterba released and performed “Dark American Rodeo,” a song which attempts to reframe how people view different social groups and in which Sterba uses racial and ethnic slurs. He performed the song at a mid-July release show (which HN reviewed here).

This is not the first time either artist has written about the boundaries of art. Bertuldo posted personal thoughts via See Through’s blog page in May, expressing disillusionment at comments surrounding the Harouki Zombi subject.

“Fellow musicians that I’ve respected throughout the years have said incredibly insensitive things,” she wrote then. “There are many people who have liked comments that are dismissive of a situation I deal with every day. I do not feel supported by my community. I do not feel welcome. I do not feel valued.”

In advance of Earthquake’s release, Joyner published a lengthy essay titled “We, The Offended” on censorship and art via ARC Studios engineer Ben Brodin’s blog. In it, he denounced “attacks” on Fink and Sterba for their work and calling on “social justice activists” to move the conversation from the “echo chamber of Facebook” to in person.

Cure what ails your mid-week blues (and get out of this cold) with some local music. Picks below, with more at our statewide event calendar here. Submit shows via the contribute feature here or emails us at news@hearnebraska.org.

Matt Cox at Harney Street Tavern – The Omaha Americana singer/songwriter kicks off his December residency in the Old Market tonight. The six-time OEAA-nominated Cox is a little more than a year removed from his latest record The Cost of Everything and the Value of Nothing. We interviewed him then about finding inspiration in serenity and his reflections on family; read it here. 9 p.m., no cover, RSVP here.

Evan Bartels at The Side Room – Ralston Arena kicks off its brand new Acoustic Sensation concert series Thursday night with Lincoln songwriter Evan Bartels. The Americana/rock artist is fresh from a solo tour and the release of his debut full-length album The Devil, God & Me. He also dropped his first ever Christmas song, a characteristically somber “I Won’t Be Home For Christmas,” last week; listen below. 7 p.m. show, no cover, RSVP here.