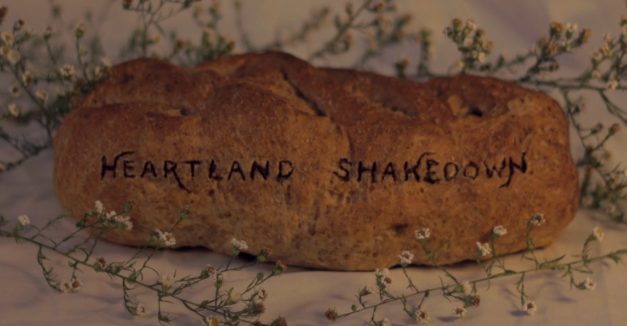 Former Omaha resident Erik Jarvis founded Yorick Studios in a basement 2013, paving the way for a number of experimental and progressive rock projects during the next two-plus years. That includes the likes of The Cosmic Smiths, who conjured spacious drama out of chugging guitar hooks and a far-out aesthetic, and Justin Carter, whose sprawling eight and nine-minute tracks mashed together soul, jazz and classic guitar rock.

The latest offering from the Yorick camp — The Plain Mosaic’s debut album Heartland Shakedown — comes straight out of that period of experimentation, but sitting squarely in the pop end of the spectrum. The project unites Omaha musicians Carter and Kat Jarvis; Grinnell, Iowa musicians Katie In and a transplanted Jarvis; and Chicago friends Caleb Neubauer and Phill Smith. Together, in just one weekend in the basement studio, the sextet laid nearly the entire album down to analog tape with the help of producer Chris Ford (aka Christopher the Conquered). The result is a deftly assembled quilt of pop, jazz and classical elements sewn together by voice, concept and complexity.

Heartland Shakedown is very often gorgeous by design, with horns fluttering, harps twinkling, and the beautifully syncopated vocal jazz on “Move Slow” adorned by sweeping string arrangements. Other times it is meandering and swaying— again, seemingly by design. “Comedrink” is sung with the wobbly vigor of one who has imbibed the song’s “poisoned waters.” “Moon” is ethereal and spacious, recalling the kind of dream-state invoked by Hail to the Thief-era Radiohead. One can really feel Ford’s hand in the post-production additions of brass, woodwind and string that recall his own smartly-crafted songs, simultaneously taking the music seriously and himself not quite so much.

While some of the album’s offerings are challenging (and similarly rewarding), there is still much to like for fans of the straight-ahead. “She Tells Me” could be from Rubber Soul, and even revolves around something as sweetly simplistic as hand-holding. “Where You Wanna Go” is textbook power pop and, following “Comedrink,” plays like a one-two punch on alcohol’s ups and downs.

In the end, Heartland Shakedown reads like the amalgamation that is the band that created it, players all as much interested in different corners of the sonic world as they are bringing them together. It’s a mosaic that certainly isn’t plain, but rather, a slow-rising concoction that gives something new on each listen.

Check it out here.

During the past few weeks, we’ve highlighted a plethora of new singles, EPs and full-length records from around the scene. It’s par for the course for us, but the most recent burst of new music has felt like one of the strongest of the year.

In honor of that, this week’s HN Radio features cuts from many of those artists, from KHARI the Duo to Universe Contest to The Boner Killerz and more. The playlist lives at the top of our homepage, in this feature and via our Soundcloud account.

This week, submissions come from 2:46 Club, who just released its debut EP An Introduction; Ridgelines, which plans its first full-length release Beautiful View on Greece cassette label Logarithm on Jan. 1, 2018; and Omaha R&B artist Dominique Morgan, who shared “Shine” with us the week of his annual benefit concert “Dom’s Favorite Things.” We also snuck in a few goodies, including our On The Record podcast review of Universe Contest’s new record Get Cot Livin.

Hear it all in the latest HN Radio playlist below.

Crush those mid-week blues with some mid-week shows. Find some picks below and fuller listing at our statewide events page here. Add your own events using our contribute feature here and email us with news tips, story ideas or song submissions at news@hearnebraska.org.

Fiona Grey with Rothsteen at The Waiting Room – Los Angeles composer and performer Fiona Grey brings her brooding, bright-lights dark pop to Omaha Wednesday. A Chicago native, Grey has been writing and performing for the last decade, touring with the likes of Charli XCX and Foals. Her debut EP Belladonna dropped in 2014, featuring her sultry vocals and grandiose arrangements on “a journey through obsession, bliss and heartbreak.” Omaha R&B vocalist Rothsteen opens the show. 8 p.m. show, all-ages, $10, RSVP here.