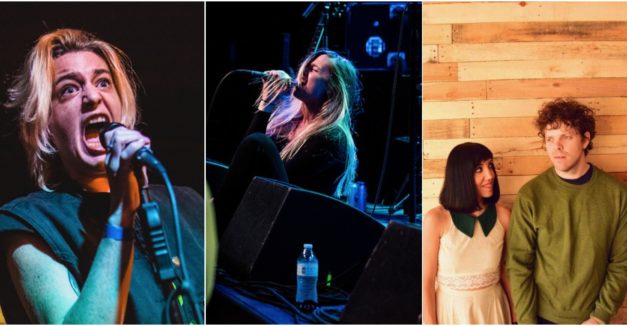 One soul band will replace another when the Good Living Tour returns to McCook tomorrow night, as Omaha outfit High Up takes the stage with psych pop band JAGAJA, rapper J. Crum, ambient rock group All We Seem and vocal trio Major Minor 3. The free, all-ages concert starts at 5 p.m. and is part of the local Prairie Roots Festival.

In addition to music, Saturday’s event will feature a volleyball tournament, giant human fooseball and more, starting at 1 p.m. Our community workshop starts at the same time, and will focus on helping interested community members with the tools and knowledge to increase the presence and support of original music locally. RSVP to the workshop here.

This weekend’s show marks the start of the second half of tour, with Norfolk, Lyons and Hastings on the way in August. Find more info about the Good Living Tour, tomorrow’s show and the remaining stops here. RSVP to McCook’s concert here.

Earlier this summer, Benson First Friday Femme Fest expanded its celebration of women in music from its namesake, holding a Lincoln edition in June. The festival’s growth doesn’t stop at the addition of a new city, however. For the first time, the festival will take place over two days, Sept. 1 and 2 with more than 70 acts performing, all of which feature at least one woman in the band.

Both nights of the festival kick off and close down at The Waiting Room, starting with opening ceremonies, followed by performances from See Through Dresses and All Young Girls Are Machine Guns ‒ with an Omaha Girls Rock band ‒ on Friday and Saturday nights, respectively. Music runs at six Benson venues, until FREAKABOUT wraps things up on Friday and Pleiades + the Bear does the same on Saturday.

BFFFF 2017 is sponsored by Hello Holiday, J Coco, Lion’s Mane Vintage, Kitchen Table, Oracle Art Supply, and Healing Tree Counseling, and for the second year, each BFFFF venue will be sponsored by a local nonprofit. The fest is still accepting inquiries for venue hosts at bfffemmefest@gmail.com.

Also on the lineup are The Boner Killerz, Domestica and Mesonjixx as well as a number of touring bands, including Schwervon! from Lawrence, Kansas, Alexa Dexa from New York and Mobina Galore from Winnipeg. Check out the full lineup and schedule below. Tickets for the weekend are $20, and day passes are available for $10. RSVP to the festival here.

*Denotes an all ages venue

It has already been quite the month for Nebraska album releases, and with one last Friday,

Umm, the new project from Big Harp’s Stefanie Drootin and Chris Senseney, releases its debut album Double Worshipper today via Majestic Litter. After exploring big hooks and layers upon layers of fuzz with that band’s most recent release Waveless, the couple draws its songwriting inward. As Big Harp, the two traipsed from country to blues to pop, and the near-constant harmonies, both vocally and instrumentally, and the jagged fuzz feel like the two pushing their experimentation forward. Whether in the force of lead track “Black Summer” or the drifting “Yeah I Want It,” the record’s solid foundation of big building blocks and repetition helps them find grounding in a whirlpool of dreaminess.

Listen to Double Worshipper here and purchase it here. The band next comes through in September for Lincoln Calling Music Festival (RSVP here).

When looked at from afar, much of existence can be summed up with a few segments, like the transitional periods or when life just feels stationary. But sometimes we look so deeply into the future that we lose sight of what’s right in front of us. In the new music video for their song “Traveler,” released on July 21, The Talbott Brothers make an ode to life’s standstills and the journey that of which they’re a part.

Erring on the side of minimalism, the video was directed and recorded in one shot by Carter Knopik while the duo was on its summer tour, stopping at A Novel Idea bookstore in downtown Lincoln and filling the book-lined walls with their wistful harmonies. Tyler and Nick Talbott crowd into a three-bookshelf-nook, their opposite-handed guitars edging against together, while the camera hovers as gingerly as they pick their guitars.

The video emphasizes an appreciation for the simplicity in living ‒ your cup of coffee in the morning or the damp post-rainstorm smell ‒ suggesting perhaps we cherish those moments as much as life’s triumphs. Watch the video below.

Also in video news, The Faint performed at FYF Fest in Los Angeles last weekend, and in an article reflecting on the festival, Stereogum posted a video of the Omaha dance-punk band playing their Danse Macabre hit “Glass Danse.” In the video, Todd Fink thrashes around the stage with a microphone in tow as the crowd waits for the chorus’s burning synth line to kick in.

In the article, writer Ian Cohen considers the lasting influence and staying power of The Faint, which, to him inexplicably drew an audience away from Erykah Badu’s concurrent festival performance. Then he concedes that he, too, chose The Faint over Badu. In a festival atmosphere, there aren’t many experiences that beat violently dancing to The Faint. Read the article here, and see the video below.

The Faint’s next Nebraska show is August 19 at Maha Music Festival, which you can grab tickets for here. 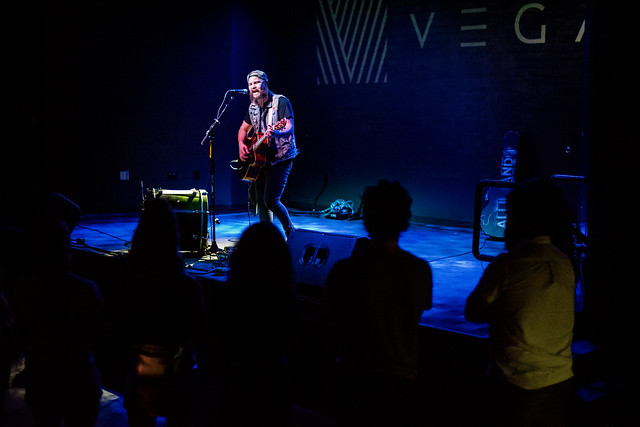 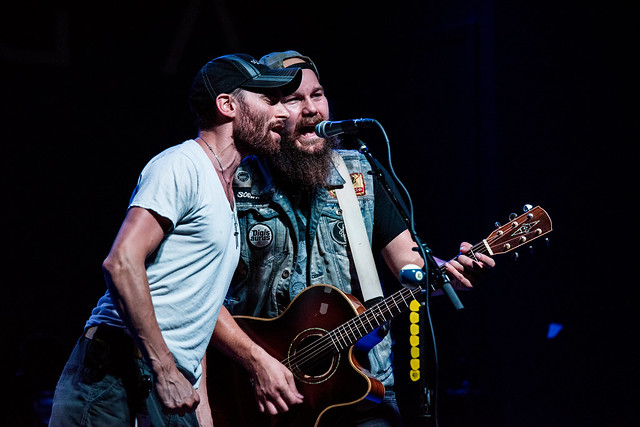 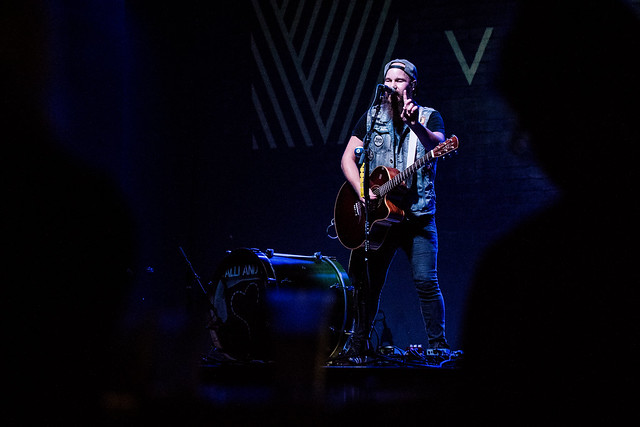 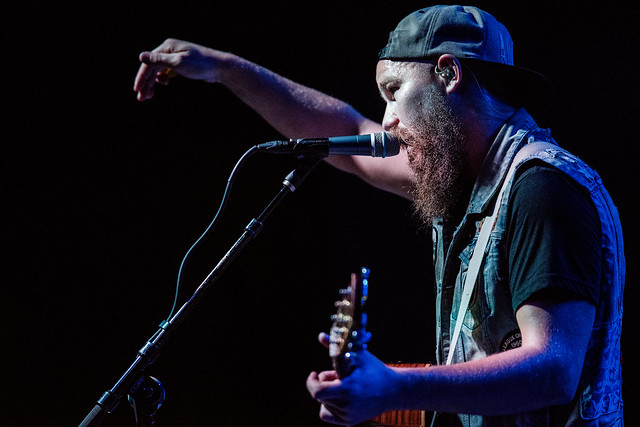 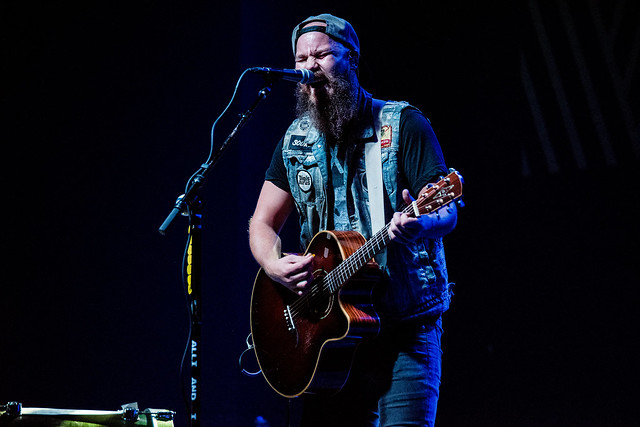 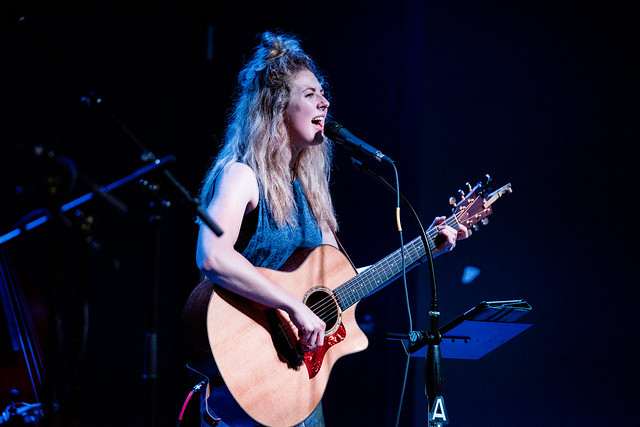 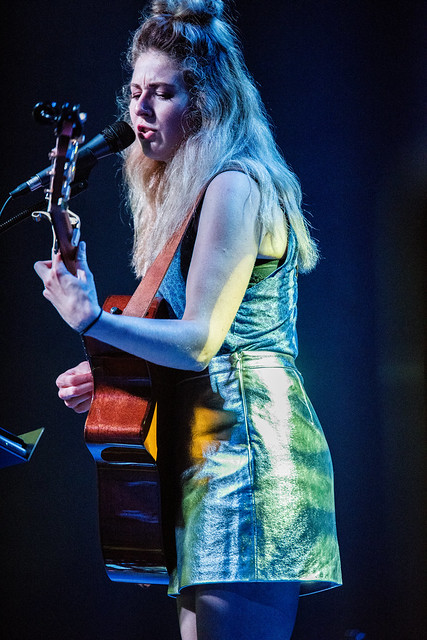 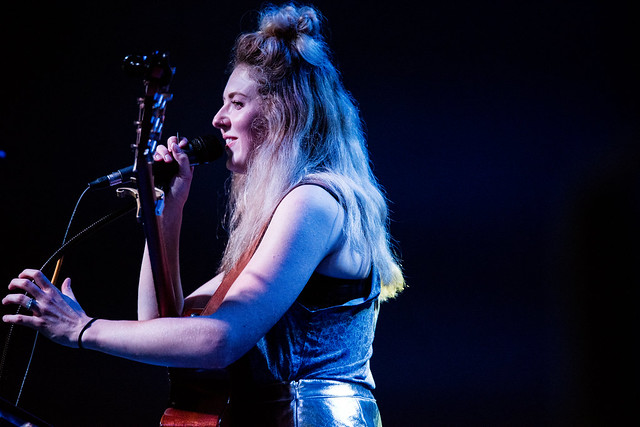 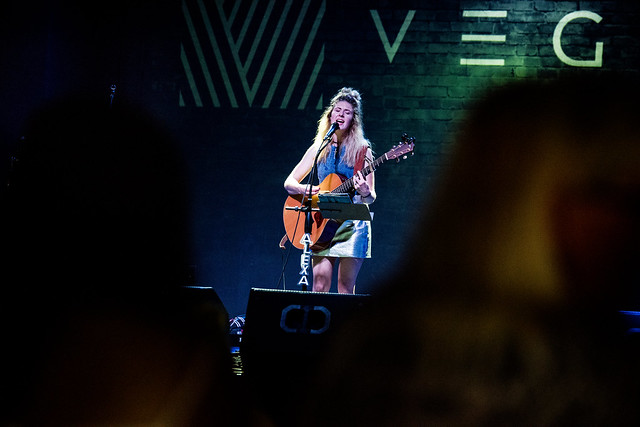 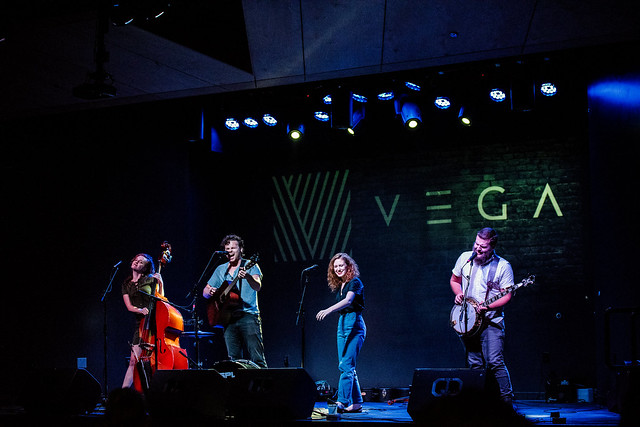 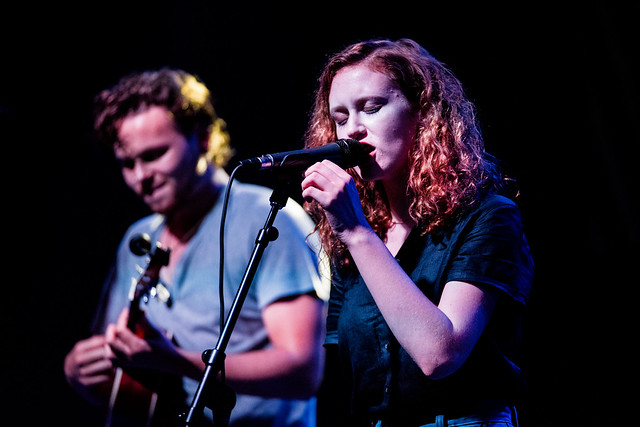 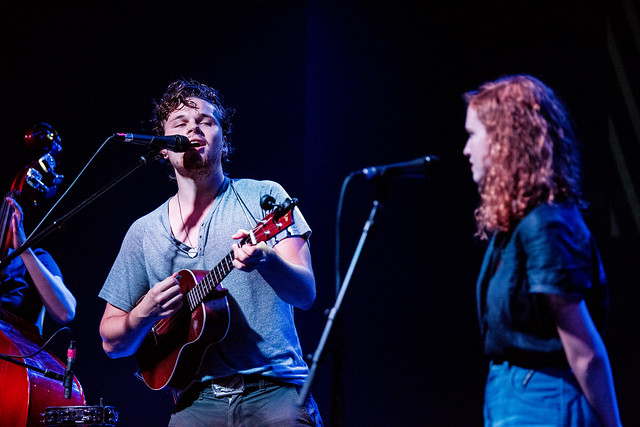 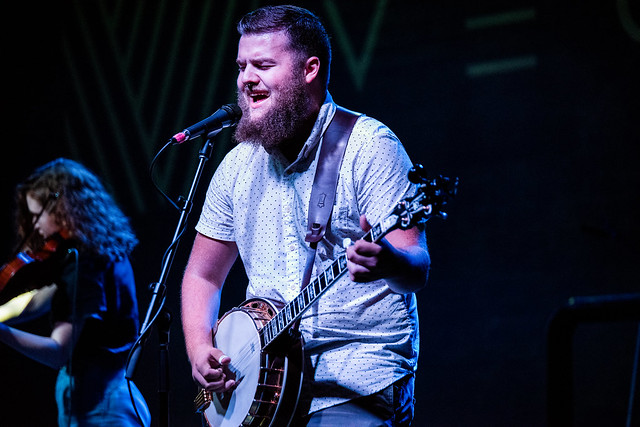 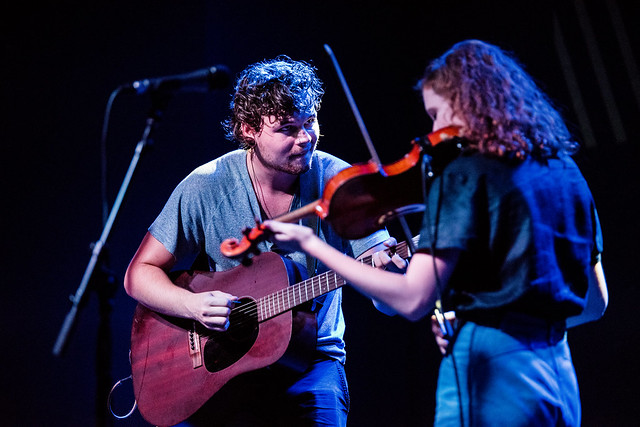 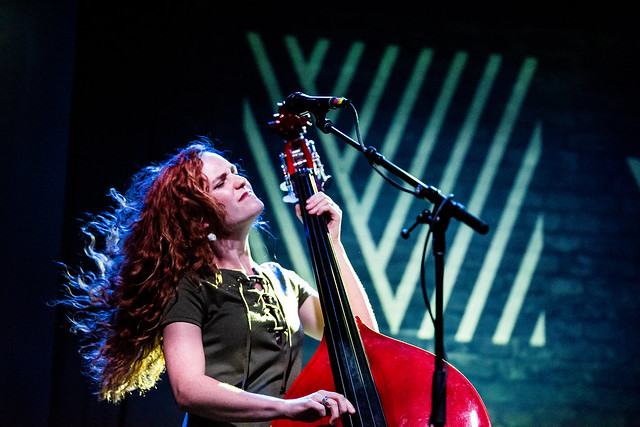 Celebrate the weekend with a show, and there are plenty of them to choose from. Take a look at our picks below, and head over to our events page for a more comprehensive list of shows. If you don’t see one of your shows listed there, add it using our contribute feature here.

Hear Grand Island with FREAKABOUT, The Hottman Sisters and The Regulation – If you haven’t made it out to the Hear Grand Island series yet this summer, you’ve only got two more chances. Lincoln hard rock band FREAKABOUT headlines this week’s edition with indie pop trio The Hottman Sisters and alt rockers The Regulation. FREAKABOUT recently discussed their on-stage personalities and their favorite tour memories in a Q&A with HN that you can read here. As always, food and beverage options will be available at Railside Plaza. Music starts at 7 p.m. RSVP here.

Twinsmith Album Release Show with I Forgot To Love My Father and Thick Paint at Slowdown – Twinsmith dropped their third full-length, Stay Cool (Saddle Creek), earlier this month, and they’re celebrating on Friday night with a release show on Friday at Slowdown. Lincoln glam-emo band I Forgot To Love My Father and Stay Cool producer Graham Ulicny’s band Thick Paint open the show. Listen to our On The Record podcast review of the new record here, and hear a cut from it below. 8 p.m. $10. All Ages. RSVP here.

Turner Park Night Market – Midtown Crossing is alive with the sounds of Nebraska music. Enjoy live sets by E Rawq, JAGAJA, The Dilla Kids and DJ Kethro as you peruse the wares of more than 40 local makers in the Vendor Village, sample fare at the mini food festival, and stretch it out under the stars with Moonlight Yoga with Lora McCarville. It’s free, open-to-the-public and (importantly) dog-friendly. Music starts at 6 p.m., RSVP here.

Ex-Cult with Kool 100’s, Wrong Pets and Nowhere at O’Leaver’s – Tennessee post-punk band Ex-Cult are back in Omaha for the second time in the past year after stopping at Milk Run in October with their September-released LP “Negative Growth.” Joining them on the bill are Kansas City’s Kool 100’s, Wrong Pets and Nowhere. 9:30 p.m. $7. 21+. RSVP here.

The Good Living Tour: McCook with JAGAJA, High Up, J. Crum, All We Seem and MajorMinor3 – The Good Living Tour moves on to McCook on Saturday when five bands take over Barnett Park. Indie pop band JAGAJA headlines with soul/punk trio High Up conscious rapper J. Crum, post-rock outfit All We Seem and vocal group MajorMinor3. JAGAJA appeared on Hear Nebraska FM earlier this week, and you can check their session out here. Music begins at 5 p.m. along with a beer garden and food options. RSVP here.

A Tribute to Cameron Ruble at Duffy’s Tavern – BloodRail guitarist Cameron Ruble passed away on May 17, and his band – along with, Cynge, Rift, Broken Skulls and Deadechoes – pays tribute to him with one final show at Duffy’s on Saturday. All proceeds go to the Ruble family. The show starts at 5 p.m., and is open all ages from then until 9 p.m. $5. RSVP here.

Duo Dos with Razors and Jewels & Thalia at The Bay – Duo Dos, the new project of White Rabbit’s Jeff Bockoven, takes The Bay stage on Saturday night, with Omaha’s Razors and Lincoln Calling artist Jewels & Thalia joining. Despite the name, Duo Dos is a four-piece that builds guitars, synths and percussion into their unhinged rock sound. 7 p.m. $5. All Ages. RSVP here.

HIDE, Plack Blague and Closeness at The Bourbon – Chicago electronic duo HIDE played on the River City Star in Omaha just last month, and they return to Nebraska again on Sunday night with two local experimental electronic staples in Plack Blague and Closeness. Watch HIDE’s short film “Anointing of The Sick” below, in which they draw parallels between religion and relationships. 8 p.m. $6. 18+. RSVP here.