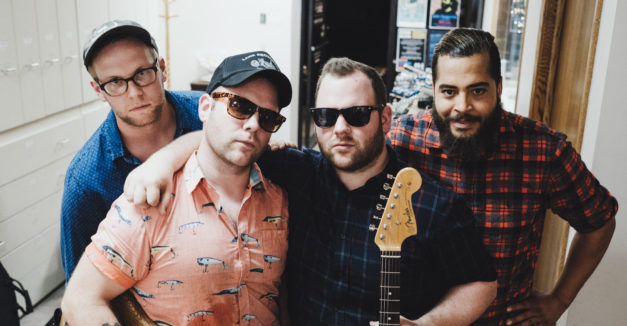 In a 2016 Omaha Magazine profile, one photo each of Gabriel and Graham Burkum was halved and laid together in a visual representation of their new band Jagaja’s fast-arriving debut LP. “We’re literally like clones” Gabriel said of his twin brother, referring specifically to their musical chemistry. At the same time, that splice — Gabriel’s leather jacket a shade off of Graham’s, their hair both swooped but slightly askew — suggested two completely different yet equal parts of one whole.

With the arrival of Jagaja now more than a year old, it’s safe to say there’s truth in that assessment. Yes, both were in different points in their respective personal lives, Graham with a wife and son and Gabe a self-proclaimed lonely divorcée. But the twins’ talents and tastes have gestated together since forming their predecessor project Skypiper in 2007 and swing/blues band Burkum Boys with brother Perry. When the two came swaggering through the headphones, sunglasses down, with the album’s ax-to-grind lead track “Puzzle People,” it was as if to boldly declare that brand new direction.

But what makes Jagaja the album somewhat a surprise is not how it sounds but how immediately-realized it feels. Skypiper was a rotating five-piece that grew from sparser folk and bluegrass into bleeding-hearted indie pop vehicle merging Local Natives-style flair with Fleet Foxes’ taste for the view. Jagaja reads like the next step: sleek, revved-up and full of attitude, all blending with a drive and energy that remind of late-aughts Phoenix or Tokyo Police Club. Its buzzing, trebly guitars push the throttle while its rhythm section bores straight ahead, creating an assortment of catchy, club-ready numbers. While the production undeniably aids them, its their fraternal chemistry and sun-soaked disposition that help realize this new vision.

So without further ado, here’s Jagaja.