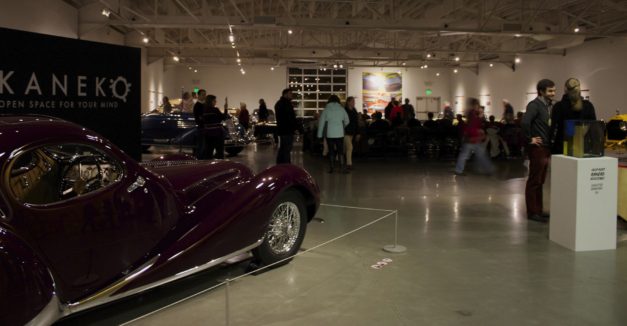 Amidst the shine of classic cars arranged for Kaneko’s Design In Motion exhibit last November, arx duo danced around its large, waist-high marimba set-up, the notes bouncing around the gallery and some 100 patrons. When it finished, the Yale Percussion Group veterans turned to their audience to provide insight into the piece, “Nagoya Marimba.”

That interaction between art, artist and audience forms the basis of Kaneko’s Eko Nova series, and it’s what the organization’s director of programming Michael Hollins finds most unique about it.

“The accessibility to the artists is something we’re interested in,” Hollins says. “With the arx duo, they talked about their process of creativity in between performance, giving viewers insight into why a piece is performed a certain way, the piece’s genesis, the technique involved.”

Eko Nova enters its second year of showcasing the dialogue between classical music and the “new music” movement, which finds contemporary artists reinterpreting classical works, this November. Kaneko has again partnered with the Omaha Chamber Music Society to bring in artists from around the region and to appeal to a diverse crowd.

The series features in-gallery performances surrounded by existing art exhibits, which Hollins says can help audiences gain a better understanding of how the creative process works for others.

“We really want to offer an alternative type of venue, given that our performances happen in the middle of gallery spaces, around cultures,” Hollins says. “That barrier that’s typically there [in other venues] is broken down somewhat and we’re invited into that process of creativity.”

The timing for Eko Nova series renewal couldn’t be better, with a new $4 million,  5,000-square-foot atrium space on target for completion Nov. 1. The addition — which features black and white striped granite consistent with founder Jun Kaneko’s signature aesthetic — will not only unify the historic Old Market warehouses that Kaneko calls home, it will free more programming space for exhibitions and unique performances.

Hollins attributes the success of last year’s series in part to its visually and acoustically unique performance spaces. He hopes the addition will spice things up going forward.

“The surprise of where [each] Eko Nova concert is going to be held will be even more fun this time around,” Hollins says.

The series renews Nov 14 with Columbus, Ohio flute/saxophone ensemble Tower Duo. The duo of Erin Helgeson Torres and Michael Rene Torres fit the Eko Nova spirit to a tee, specializing in creating engaging musical experiences through contemporary performances and sharing the importance of the arts with communities through the country.

Today brought a handful of intriguing show announcements which fill the calendar for the rest of the year.

First up, See Through Dresses will play a pair of Nebraska shows with Tiny Engines labelmates Haybaby. The Brooklyn-based sludge rock band followed its debut full-length Sleepy Kids with a boundary-pushing EP Blood Harvest, which showcases vocalist Leslie Hong’s range and trio’s power capabilities. Shows include Milk Run on Friday, Oct 21 with The Way Out (RSVP here) and Saturday, Oct 22 at The Bay (RSVP here).

And Friday, Dec 23, local indie rock takes over The Waiting Room, as Criteria, Little Brazil and Eric In Outerspace play a pre-Christmas show. Criteria unleashed new material a couple of weeks ago at Beer Nebraska, and likewise, Little Brazil was in the studio early this year. Those tickets go on-sale Friday, Oct 14 at 10 a.m. RSVP here and get tickets here.

Have an upcoming show or tour? Email us at news@hearnebraska.org.

A day behind schedule, HN Radio has a fresh playlist running at the top of our homepage. It features most of the tracks played live Monday night on the KZUM airwaves for Hear Nebraska FM.

Among them are new tracks by Jagaja, Nathan Ma and The Brooke Loose. The playlist also features a track from last week’s in-studio performance by The Morbs, along with a few live songs from the vault. Spin it at the top of the site or below:

Tonight, longtime Kansas City, Mo., rapper Tech N9ne comes to Slowdown, 729 N 14th St, as part of his The Calm Before The Storm tour. Tech N9ne is essentially one of the most successful independent rappers around, thrice scoring gold certification, including for his party anthem “Caribou Lou.” His last studio album, Special Effects, was his biggest yet, featuring the likes of Eminem, 2 Chainz, B.o.B, T.I. The current tour precedes the rapper’s forthcoming studio album The Storm, out Dec 9. Krizz Kaliko, JL, STARRZ and Kontages open the show. 7 p.m., tickets are $37. RSVP here.

Plan your show-going week with our statewide calendar here. If you do not see your show or one you plan to attend, email news@hearnebraska.org or add it yourself using our contribute feature here.