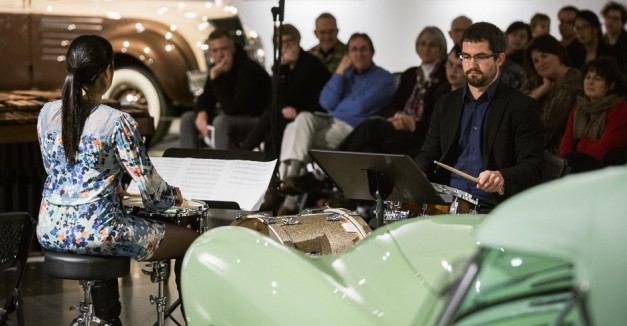 “So, what is this concert?” my boyfriend Brandon asked as we were driving to KANEKO.

We were on our way to the second Eko Nova concert Monday night. arx duo comprises Mari Yoshinaga and Garrett Arney, an electrifying ensemble born from the legendary Yale Percussion Group.

Here’s the 411: KANEKO is collaborating with the Omaha Chamber Music Society and artistic director John Klinghammer to create this exciting new music performance series entitled Eko Nova. Eko Nova introduces Omaha audiences to some of the most innovative and inspiring musical works written today – music that looks outward with an openness to a myriad of genres, styles and forms.

Fifteen minutes before show time, KANEKO was already filled with about 60 patrons. The space was eerily silent as the only thing you noticed was the badass shine on vintage cars, arranged for the Design In Motion exhibit. Seriously, if you haven’t made it down to see it yet, do yourself a favor. Most people quickly dropped their coats at their seats and perused the car collection in KANEKO’s main room. 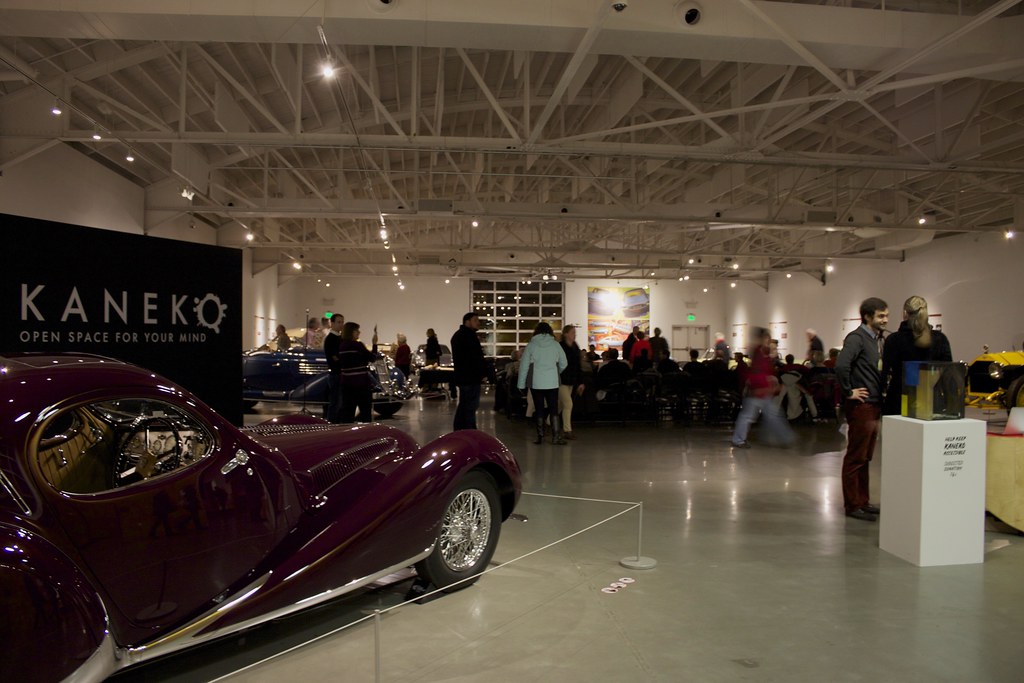 The seats were set up mirroring each other with approximately fifty chairs on one side, and fifty on the other. The artists were set up to perform in the center. As everyone sat down, you could start to feel the energy in the room pick up. There was a rumble of excitement in anticipation of arx duo taking the stage. The audience was surprisingly a mix of young and old which was great to see. And I’m not going to lie, I did have to Google this group before I attended the performance, but a few clicks into my research I got a glimpse of their musical style and couldn’t wait for them to start their performance. I didn’t tell Brandon anything about the event, as I wanted to get his initial and real reactions throughout the performance (I know, I’m cruel). We were able to get there early enough, and snagged a front row seat. The artists took the stage very unassumingly and started playing promptly at 7:05 p.m. to a full house. Every seat was filled, and everyone was on the edge of their seat. You know at some concerts when you are packed to the gills at a small venue and can feel the bass hit your chest and it’s one of the best feelings in the world? The way in which arx duo’s notes filled the room, you felt that in your chest but in a much softer way. It was just as authentic and just as captivating. The way they danced back and forth playing in tandem over their marimbas was something magical. Their first song, “Nagoya Marimba” by Steve Reich, definitely set the tone of the evening. 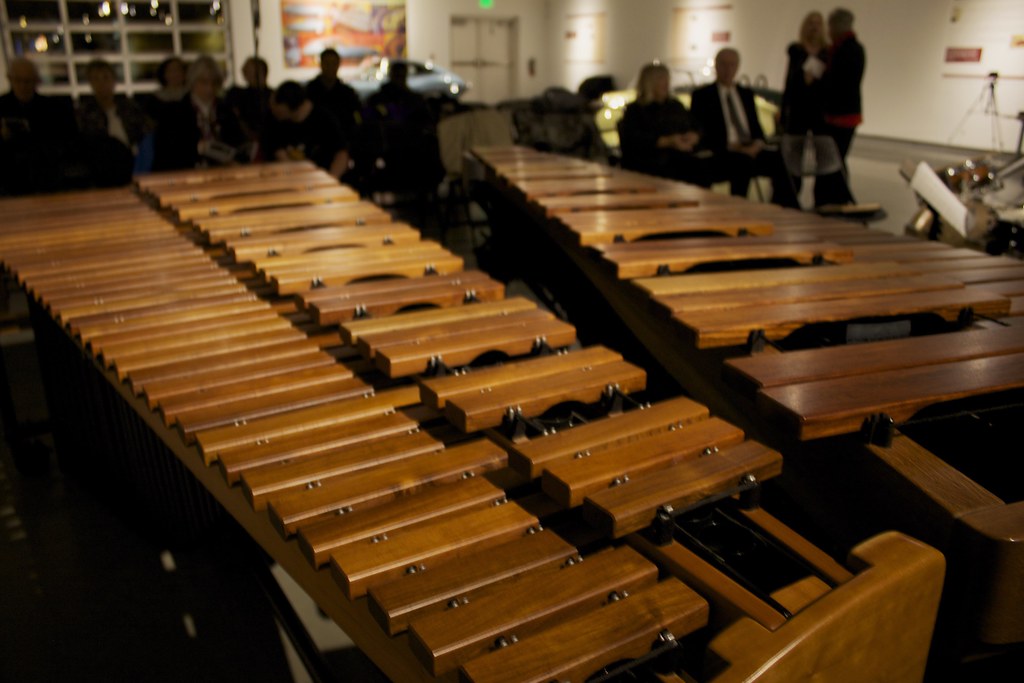 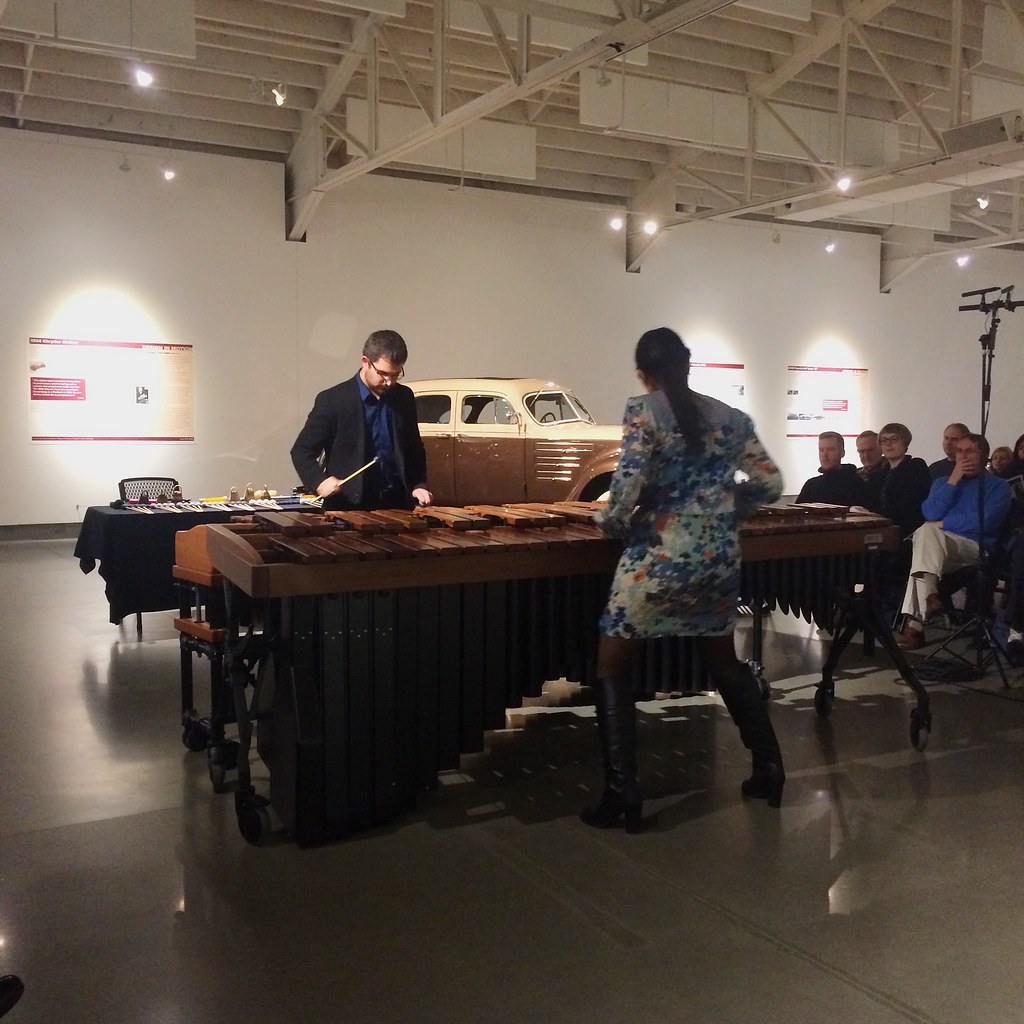 After the first song, they stopped and addressed the crowd to introduce themselves and explain some of their instruments for their next performance. Some instruments resembled tiny wicker baskets with beads enclosed in them, and others were literally orange medicine pill containers with percussion beads inside them.

They moved right along into “Seeds” by DESVIO and used solely these odds-and-ends instruments for the entire duration, none of which I’ve seen before. Their wrists and hands were very swift and precise, like synchronized movements of a bird’s head. Both artists were playing two instruments (one in each hand) almost the entire song, and most times each hand was playing a different beat. At one point they set down all of the instruments and were barely tapping the instruments on the table. As hard as you would tap the stove to see if it’s still hot (who else does this?). That was one of the most exciting things about this performance, the diversity of instruments, and the highs and lows of both sound and rhythm. 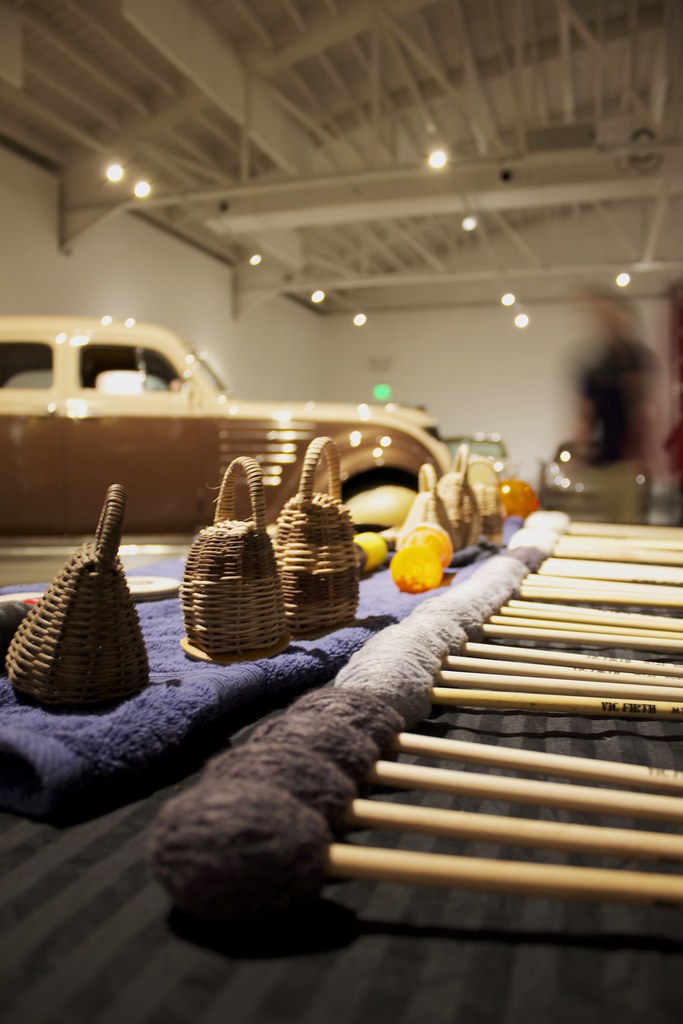 For their third song, “Loneliness of Santa Claus by Fredrik Andersson,” they returned to the dueling marimbas, this time with two mallets in each hand; it was about to go down. The song started and it was instantly very haunting and dark. For me, it was the most captivating thus far. The song was, without a doubt, telling a story. And as the audience, we couldn’t help but to try and write the script. In the song, you felt beautiful heartache and you couldn’t look away.

Keeping in true arx duo fashion, the fourth song was on a completely different set of instruments, the snare and base drum. This one was titled “Silent Treatment” by Jonathan Allen, and it was anything but silent. It literally started out with a bang, the loudest snare beat my life has experienced. One, probably because they were two feet away from us, and two because the room was completely silent. Now that I was completely attentive, they both flawlessly played the snare and used the same kick drum with their own kick pedal on opposite sides. They would have made Nick Cannon look like a total noob for sure. But for real, with using these two standard instruments, we really got to experience their talent. They turned these two simple instruments into a back and forth rhythmic roller coaster, and we didn’t want the ride to stop. 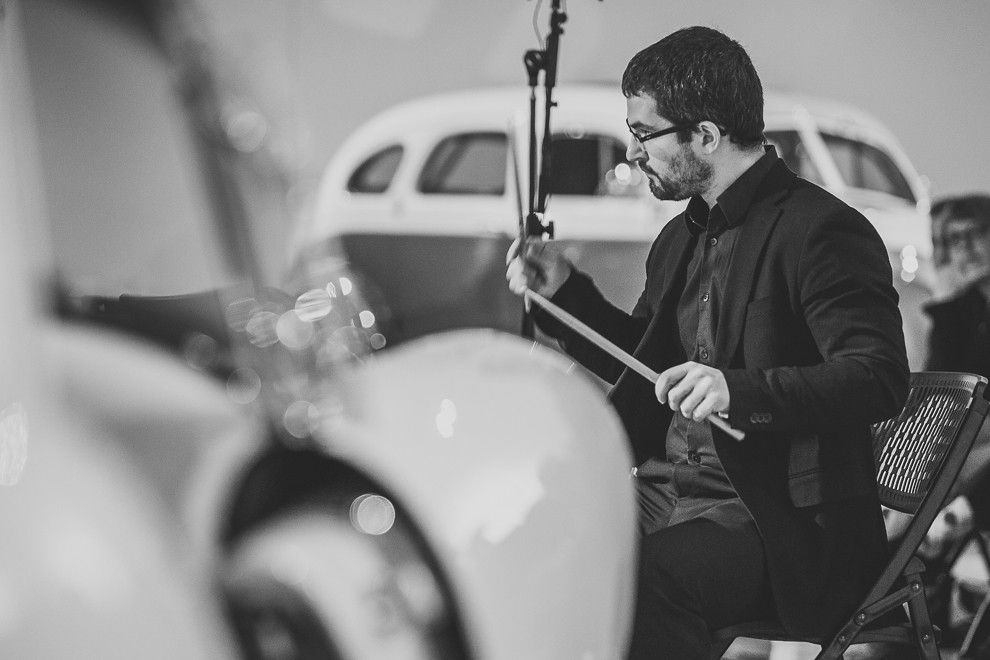 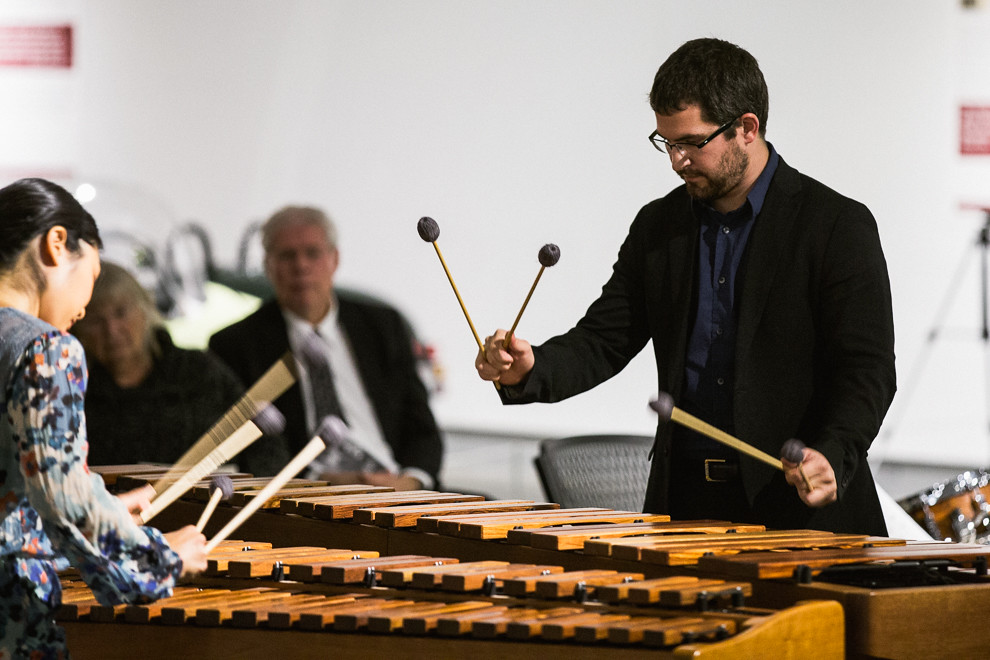 The last piece for the evening, “Book of Grooves” by Alejandro Vinao, had four parts to it. Garrett encouraged us to find where our heart danced during this song. They returned to the marimbas and changed mallets four times during this finale. It was during this last song that I finally looked around at the audience, as I wanted to see how they were reacting as well. I kid you not, over half of the audience had their eyes closed and I kind of freaked out.  They all had the most blissful smirk on their face, and initially I was confused and thought oh shit, they’re sleeping! But thankfully, it was actually the opposite. Some were entertained with their eyes and ears, others wanted to become completely engulfed in the music and experience their own imagination in the songs. That’s really what arx duo inspired you to do; their music spawned creativity, curiosity and imagination. We all experienced that night, eyes open or closed.

Art induces you to feel something, and arx duo did this magically. Leaving KANEKO, I felt as if I just came-to after an hour long meditation session. These two insanely talented artists made you feel renewed, and it made for an unforgettable night. 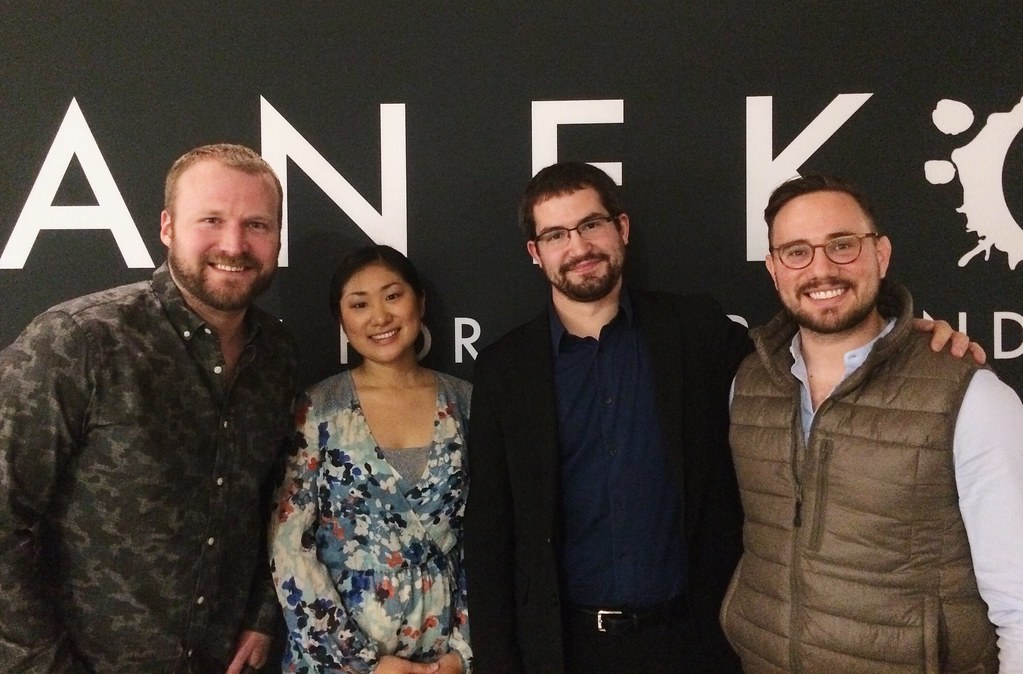 As we were leaving, I was able to catch both Mari and Garrett after the show to show my appreciation for their performance, take a picture and ask them why they felt their music is important today. Garrett replied, “We are pushing the boundaries of what can be new, and getting people reintroduced and interested again in percussion.” Well guys, you certainly made us fans.

Oh, and Brandon loved it. (And then we went to Ted and Wally’s after the performance because Omaha.)

Eko Nova is made possible by generous support the Nebraska Arts Council and David A. and Carolyn M. Diamond.

[Editor’s note: this article originally referred to xylophones, when in fact marimbas were played. It has been updated]