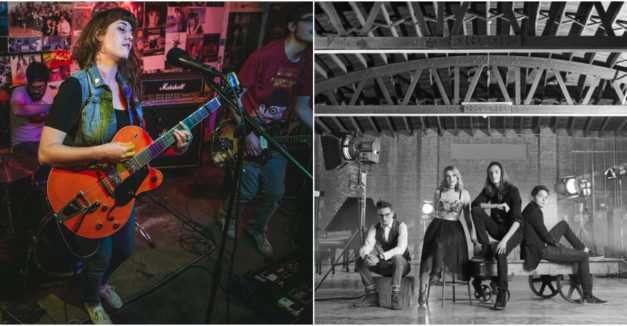 Garrison Keillor had been broadcasting “A Prairie Home Companion” for 42 years before retiring in 2016. The show, praised for its sincerity and lightheartedness, featured a vast collection of music, poetry, stories and other forms of media on NPR.

As a tribute to the show, Omaha singer/songwriter Kait Berreckman has announced “A Benson Home Companion,” a weekly variety show that will take place every Thursday in May at Barley St. Tavern. Live broadcast, the show will feature musicians, comedians, poets, storytellers and other diverse acts.

Berreckman, who also books at Barley Street, says she’ll be creating original music throughout the show. In anticipation for “A Benson Home Companion,” Berreckman released a theme song along with band, Kait Berreckman and the Homebodies.

Berreckman announced an IndieGoGo campaign to raise $2,500 for the show. The funds will go directly to performers involved, and the show will go on whether or not the money is raised, according to Berreckman.

Check out the campaign here.

Clark & Company announces new album with video for “Something”

Omaha pop outfit Clark & Company will release a new album, Josephine Had a Dream. The band released a washed-out, dreamy video for its song “Something.” The video features a performance inside a dusty, well-lit warehouse. “Something” was recently selected as a runner-up for the International Acoustic Music Awards in February.

The sibling trio’s music is comprised of influences from blues, jazz and soul. Its song “New Orleans,” was named a finalist in the 2016 USA songwriting competition in the R&B category, along with “Battlecry,” and “To Rule the World,” which have also been recognized by the International Acoustic Music Awards.

Clark & Company will release Josephine Had a Dream Friday, April 21st at Reverb Lounge. The album, which was produced by Grammy-nominated producer Tom Ware (Lady Gaga) will have 13 tracks. RSVP for the show here.

We're so excited to share our first music video for our new album Josephine Had A Dream. Here is the video for "Something," stay tuned for more!

Local hip-hop showcase GoodGospel has announced the fifth installment of its series, which will take place March 31st at 1867. The event, curated by rapper Sleep Sinatra, highlights hip-hop artists from Nebraska. The series began with the DIY venue Church as its home, before the venue was forced to close its doors. After its closure, the series continued on, taking place at different bars in downtown Lincoln. This month’s showcase will feature Lincoln’s DrewRill and Dey-Jean, as well as the Omaha rappers MADE, Buddi3 Da Gawd, and VERZE. The show will be $10 and 21+. RSVP here.

We have a quick update in a developing story on DIY venue Milk Run’s status.

The venue, which has been on temporary hiatus since January, has apparently found its new Omaha location. Multiple Facebook posts by those involved indicate it will reopen March 31 at a not-yet-announced space.

The venue opened in 2015 under the management of Omaha booking company Perpetual Nerves (editor’s note: its Sam Parker who books Lincoln Calling). The venue has become a hotspot for indie rock, punk and experimental acts both local and touring.

England new wave band The English Beat performs tonight at The Waiting Room with Omaha’s The Bishops. The English Beat rose to popularity throughout the 1980s and, at 60 years old, frontman Dave Wakeling is still touring full-time today. The London band will release new album Here We Go Love this spring and is in the middle of an American tour. The Bishops won Best World Music in the 2016 Omaha Arts and Entertainment Awards. Tonight’s show is $25 and all ages. RSVP here.

Also tonight, DJ Odinson will perform at Duffy’s for the bar’s Electric Fishbowl series. The series features electronic and house music from local DJs. The show is by-donations. 21-plus. RSVP here.
For a full look at tonight’s shows, check out our calendar here.

Email us with any news tips or story ideas at news@hearnebraska.org.