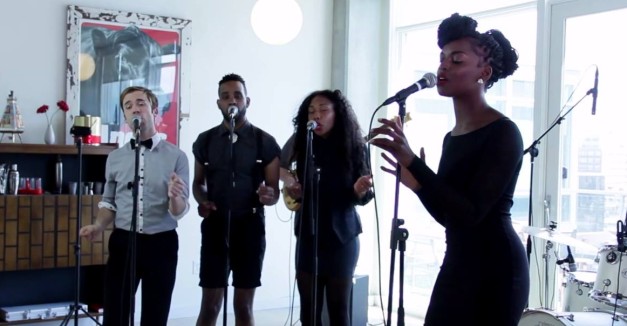 Yesterday, we announced the lineup for the first stop of July’s Good Living Tour.  Imperial is one of nine stops through Greater Nebraska from July 17-25, during which we’ll bring three original and diverse Nebraska music acts to each community for a free, all-ages show. The acts range from country to hip-hop to pop punk to folk.

We announced our second stop, in Ogallala, earlier this morning. It will feature Twinsmith, Freakabout and Lloyd McCarter. Through the middle of next week, we’ll announce one city each day until all dates are revealed.

If you’re interested in the criteria we used to curate each lineup, here’s a word from our executive director, Andy Norman:

“With an eye toward providing an enjoyable, enlightening, and even sometimes challenging music experience for both die-hard and casual fans, young and old, we considered: artistic and live-performance quality; history of successful touring (i.e., road-readiness); recent or upcoming album releases (i.e., new music); ability to play an all-original (i.e., no covers), family friendly set; proven ability to draw crowds and to self-promote; in some cases, local community ties; and innovative artistic elements. To the best of our ability, we have worked to represent all types of diversity on the overall tour lineup.

We don’t expect everyone to like every band, but we aim for each audience member to connect with at least one of them. So just as many Nebraskans have a favorite football team, we hope every attendee comes away with a favorite Nebraska band…”

The performance also features Lincoln musicians Dan Beard on lead guitar, Zakk Wooten on guitar, and Daniel J. Firestone on bass, with arrangement contributions from Beard and Wooten. Both Beard and Firestone perform with Lucas Kellison.

The high-rise-apartment video of their slow-burning cover was produced by Jared Alto and was released this morning.

Xion is the musical trio of Mary Lawson, VJ Herbert and Eric Harris. You can catch them Friday on an O’Leaver’s billing with All Young Girls Are Machine Guns and Lars & Mal. RSVP here.

Sleep, aka Adrian Madlock,  says the four-song EP was “…manifested out of tracks made during the creative process of SHAMANIQ.” Originally intended for release exclusively on CD, Sleep Sinatra instead made it accessible for free via his Audiomack webpage. You can also listen below:

And read our recent review of the SHAMANIQ collection here.

Omaha musician Chris Atkins has a new podcast out: “Memory Ghost.” Atkins has released multiple collections of music the last few years as Memory Mines, but you may know him from his old songwriting project Chris The Whale.

Atkins has posted a pair of episodes, in which he sits down with various Omaha artists to talk about their projects, as well as the scene around them. In its second installment, Ryan McKeever joins Atkins at Benson’s Sweatshop Gallery to talk about new music from both Staffers and Telepathy Problems. They also touch on other Omaha music, and the “Blue Omaha” calendar that McKeever designed and created for his graphic design thesis. Check it out here.

Later in the podcast, Atkins chats with Cody Anderson and Tom Polinko from Intergalactic Star Hero, as well as Scott Norenberg from the Woodworks. Polinko has thus far appeared on both episodes of the podcast.

Check it out the podcast here.

Montee Men has released yet another track, the aptly named “Ritual 3”, from its first EP. The first two tracks were released last Tuesday and the week before, respectively.

The new Omaha sludge rock band is comprised of John Laughlin (Pro-Magnum), Chris Kelley (Back When) and Matt Baum (Desaparecidos). The band recorded with Ben Brodin at ARC Studios.

Folk singer Arlo Guthrie plays the Holland Center tonight at 7:30 p.m. as part of his Alice’s Restaurant 50th Anniversary Tour. Guthrie is perhaps best known for his 18-minute talking blues track “Alice’s Restaurant Massacre,” in which he gives a satirical account of 1960s counterculture. The remaining tickets for the performance range from $28.75 to $51.75, and can be purchased here.

After releasing its third LP via cassette last October, ambient drone trio Bus Gas plays a (late) release show tonight at O’Leaver’s with R. Ariel, Mint Wad Wally, and Forest Television. Our podcast team reviewed Snake Hymns upon its release, which you can hear below. Tickets to the show are $5. RSVP here.