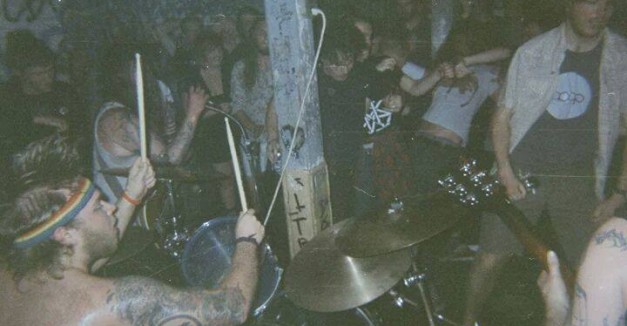 After an active 2014 for its members’ various other projects, Digital Leather will itself get a release in 2015.

The Omaha synth punk band has announced via Brooklyn Vegan that FDH Records will release All Faded on June 23, a three-year follow up to 2012’s Modern Problems and its first official LP since the addition of The Faint’s Todd Fink.

Shawn Foree, the band’s founder and frontman, has produced a wealth of material over the last year, with multiple album releases from different projects, including a split record with Digital Leather and Madison, Wis., scuzz punk duo The Hussy last May. He partnered both with Bobby Hussy for dark synth project TIT, which released its self-titled EP in December, and with Worried Mother’s David Hansen under the name Diode.

Fink has been plenty busy himself, with The Faint’s release of Doom Abuse last April and his production of Orenda Fink’s Blue Dream, which dropped this past August.

Along with the news comes the premiere of a new single, “Face To The Wall,” a two-minute lo-fi garage romp featuring Fink’s blaring police-siren synth and Foree’s droning vocals repeating the chorus: “Face to the wall/here comes another day.” Stream the track below.

Currently, the band is out on a quick April tour, which wraps at O’Leavers this Friday with Plack Blague. RSVP here.

Wyoming, stricken by a blizzard last week, has seen its share of interstate pileups over the past few days.

On Friday, a video surfaced of Thursday afternoon’s wreck which, all told, involved nearly 70 vehicles, most of them commercial trucks.

Mick Ridgway, drummer for Omaha’s The Ridgways and Lord Green, was on hand for the wreck. Lord Green, originally based around Quad Cities area, is wrapping up a 10-show, eight-day tour. Tonight, the stoner thrash/hardcore band plays the final show of the tour in Cedar Falls, Iowa.

Lord Green began in Quad Cities with guitarist Tom Parkinson and bassist Jamie Warren. Parkinson moved to Omaha a few years ago and Ridgway began playing with Parkinson in Relentless Approach. Lord Green will be releasing music and hitting the road through 2015.

We caught up with Ridgway over e-mail to hear about the band’s near-miss pileup on its way from Laramie to Denver.

He says driving conditions and visibility were so poor, they were driving around 15 miles per hour on the interstate. He says they came up on the pileup and had to slam the brakes to avoid hitting the car in front of them.

“We had to brake and started sliding, we were able to slide off the road safely and avoid the car in front of us,” Ridgway says. “From there we parked for a second and sat and watched the semis start piling up.”

The pileup had just begun. Ridgway says they watched the worst of it come down the road.

Eventually, the band backed the van down the interstate. You can see the van in the video, creeping backwards. Then they sat and watched more, helpless.

“We just sat there. It was terrifying.”

But he says things could’ve been much more, if not for one truck driver’s shrewd decision.

“The semi truck behind us was the first guy to actually do something right,” Ridgway says. “He came and chatted with us while we were sitting and waiting. He would’ve-rear ended us if we hadn’t slid off of the road. He told us he intentionally jackknifed to block the semi truck in front of us, which was carrying hazardous materials.”

Ridgway and the band were unharmed.

“Aside from the ‘Final Destination’ moment of our trip, this tour has been blast, he says. “Once we heard there were no fatalities it was a huge load off our minds. We were extremely lucky to drive away unharmed.”

Absolute Punk offered the first listen to a track from those sessions with “Empty Handed.” Death of the Sun will be released June 30 on Take This to Heart Records. Get your preorder here.

No Tide’s next Lincoln show is May 15 at Knickerbockers with A Summer Better Than Yours and Letterbomb for a tour kickoff. On May 9, the band plays Sokol Underground with The Mighty.

Last week, we wrote about the release of Montee Men’s first track, “Ritual 1.” This week, the Omaha sludge rock band released “Ritual 2” with “Ritual 3” on the horizon. Montee Men is comprised of John Laughlin (Pro-Magnum), Chris Kelley (Back When) and Matt Baum (Desaparecidos). The band recorded with Ben Brodin at ARC Studios.

There’s yet another music festival on Desaparecidos’ horizon.

Tickets go on sale on May 1. The Fest is only selling 3,750 tickets to the urban festival this year. Get yours here.

Desaparecidos have been hitting the road hard in anticipation of the band’s second album, Payola. It will be released on June 23 by Epitaph.

The Bricks released its first full-length with Raven Faith Records earlier this year. Hand Painted Police Car has a batch of recordings available at Reverb Nation.