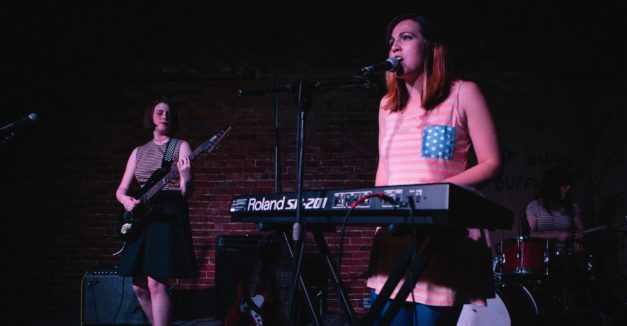 For Omaha instrumental rock band Fontenelle, there is no place like its basement studio. More than the live stage, as its members explained in a recent interview, it’s where everything is honed, from group chemistry to the completion of its forthcoming album.

Fitting, then, that its new video, “Transparent Frequencies,” was filmed there. It begins sparkling and smooth, building quickly through Zach Kurmel and Tristan Costanzo’s swirling, soaring guitar riffs. It continues to shift dynamically between the two themes, allowing the listener to build visuals on their own.

Fontenelle releases its new album, Live and Maintain, in the Slowdown front room Friday with Wakanda, Bed Rest and The Madness Apparatus. Doors are at 7 p.m., tickets are $8 and $10 on the day-of. RSVP here.

Back in April, we reported Lincoln pop punk band No Tide would play its final show April 16. But they aren’t quite finished yet.

The longtime, hard-touring quartet’s final go will actually be this coming Friday in its home town. It plays Vega, 350 Canopy St, with A Summer Better Than Yours, Mad Dog & the 20/20s and Salt Creek.

RSVP to the 8 p.m. show here, and listen to No Tide’s recent full-length album Death Of The Sun below:

Typically, it’s Monday that brings a new HN Radio playlist. We snuck it in over the weekend and wanted to draw your attention to it.

Check the playlist below, and find it at the top of the homepage.

If you’re looking for shows tonight, Chicago singer/songwriter Sam Vicari comes to 0709 Gallery, 1909 Leavenworth St (next to Milk Run), and will play with a pair of Omaha acts in The Bricks and Kait Berreckman and Lincoln singer/songwriter Scott Severin. Vicari launched a month-long nationwide tour last night in Des Moines, in support of his new LP Blunt, out now on Sip City Records. Read an interview he did with Impose Magazine here.

While Berreckman has a new album coming out in August, her grant from the Omaha Creative Institute’s CSArts Program helped her produce a 7-inch with two songs from the LP. It’s available now at Almost Music and at tonight’s show. RSVP to the 9:30 p.m. show here.