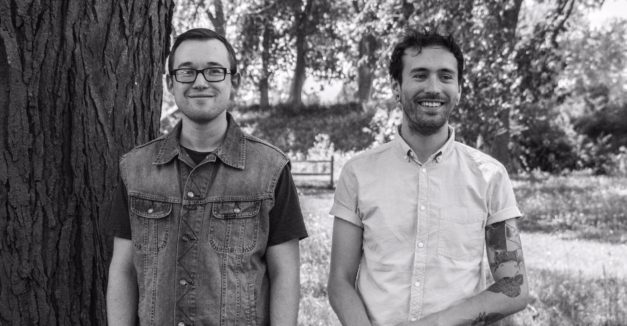 Will Conner (No Tide) and Paul Knapp launch new project

No Tide, one of Lincoln’s longest playing punk rock bands, might be on its way out, but multiple projects are rising from its ashes. One of them has already hit the studio.

Will Conner, the (officially July 8) dissolved band’s bespectacled, anthem-shouting frontman has started a new Omaha-based indie rock band Centerpiece with fellow musician Paul Knapp. The pair of them entered the studio this past weekend to begin recording.

From the airport on their way to Boston, Conner and Knapp answered a few questions about the project. Read their answers below:

HN: Indie rock sounds like a slightly different direction for you. From where are you drawing inspiration?

Paul Knapp: “Indie rock” to us, in a summary, is a bit of a blanket to encapsulate both of our influences. Without a cliche in saying we “don’t know what we sound like,” it was an easier route without being pigeon-holed or beholden to a set form of musical ideals, or expectation for the listener. I would think everybody has their own idea of what “indie rock” means to them. Which is ultimately the approach we want to take with these new songs.

With this new project, our main focus is to just write great songs. It’s important to us that we approach art with intention, and conviction, without it being totally contrived. It’s needs to come from an organic place. You don’t need a fashion statement to make a statement. As long as we’ve been in bands, we’ve found ourselves a bit obsessed with work from musicians like Jim Adkins (Jimmy Eat World), Chris Conley (Saves The Day), Stephen Jenkins (Third Eye Blind). Who take a traditional song writing format, and add their signature to it in a way that makes it palatable, but still very true to who they are as people. That’s something we’ve always both strived for in music.

HN: You’re already recording (with the same producer that No Tide used, right?) How long has this project been in the works?

Will Conner: Yes! For this release we’re working with producer Jay Maas (Somos, Transit, Citizen) who we have gone to in the past. Today (June 16) is the day, we’re at the airport waiting to get on the plane to Boston as I’m writing this. It’s always a pleasure to work with a like-minded producer who is all about the details of a recording and making it the best group of songs possible so we’re really looking forward to it.

Centerpiece came about after the ending of our previous band. We knew we wanted to try something different and really focus in on the songwriting. Overall it’s taken us about 3 or 4 months to write the EP and we’re proud of what we’ve come up with.

HN: Who else is in the band? How did you get together?

WC: As of right now, Paul Knapp and I are Centerpiece. We’re approaching this differently than bands we’ve done in the past. We really hope to bring Centerpiece to a live situation with a full band soon. The two of us are acting as the primary songwriters for the group, and soon we’ll find a couple like minded people from the Omaha area to solidify a lineup and help bring the songs to life.

HN: What else should we know about Centerpiece?

WC: We’re not really sure what we sound like from an outside perspective, going into the studio with Jay Maas is really going to be important so that we can give off a first impression we can be proud of. It will be interesting to see how the songs sit with new listeners.

HN: When will we first see Centerpiece live?

PK: As of right now, we’re a two piece act with intention of filling out our lineup as time goes along. For now, we’re trying to incorporate our friends and band members from other local acts as fill ins from the DIY scene as they’re available. It’s a bit of a family franken-band, after all, it’s sort of like being in bands with all of your friends at any given moment. After the EP is finished in the coming couple months, and we have more to show than a few demos, local shows will start popping up. We hope you’ll be able to make it out to one!

One of Hear Nebraska’s chief Good Living Tour goals is to expose a young audience to new, innovative music and performance through homegrown Nebraska musicians. Thanks to Nebraska Loves Public Schools, some of those young musicians will share the spotlight.

The organization — has teamed with Hear Nebraska to showcase one student act during each of the 12 Good Living Tour concerts. The public school performers — soloists, ensembles, instrumentalists and more — will perform one song of their choice during each concert throughout the three-weekend tour.

“When we found a way to further promote the young talent from our public schools across the state this summer, we couldn’t turn it down,” a Friday, June 17 statement on the organization’s website read.

Nebraska Loves Public Schools highlights positive public school experiences and developments through visual storytelling. Funded by the Sherwood Foundation, its work has been recognized by the Webby Awards, nominated as an Official Selection for the PovertyCure International Short Film Festival and screened in the Film Streams Omaha Local Filmmakers Showcase. Learn more here, and watch its video “Why The Arts Matter” below:

And today in Conor Oberst sightings: the Omaha native singer/songwriter appears in the backseat of Monsters Of Folk bandmate M. Ward’s vehicle in the video for “Slow Driving Man.” The song appears on Ward’s latest album, More Rain, which is out now on Merge Records.

The song itself is a hazy, string-laden slow-burner, the kind known to appear in the middle sections of Ward’s classically-flavored folk records amongst rambling tales and fuzzy rockers. Darkness shrouds Oberst’s face until roughly the three-minute mark, when he emerges from the backseat to direct his gravelly-voiced chauffeur. Watch the video below:

Tonight, for the first time in three weeks, we’ll be back on the air live, 8-10 p.m., for Hear Nebraska FM. In addition to two hours of Nebraska music, we’ll be taking listener donations in support of KZUM’s summer Soundbackers’ Drive.

As we noted last week, KZUM is halfway to its goal of raising $300,000 by September 30 in order to continue qualifying for funding from the Corporation for Public Broadcasting. Federal funding from the CPB comprises roughly 25-percent of the station’s operating costs.

Tune in to 89.3 FM in Lincoln or stream live at KZUM.org. If you feel compelled to support KZUM and the fantastic, locally curated programming it delivers, become a Soundbacker by calling in to 402-474-5086 or donate online here.

For a full listing of this week’s shows, head to our statewide calendar here. Musicians: send us details for your upcoming release, tour or other news via email at news@hearnebraska.org.

One final note: we’re always looking for volunteer contributing photographers and writers to help us cover the state’s music community. Email Hear Nebraska’s managing editor Andrew Stellmon at andrews@hearnebraska.org if you’re interested and would like more details on how you can help.