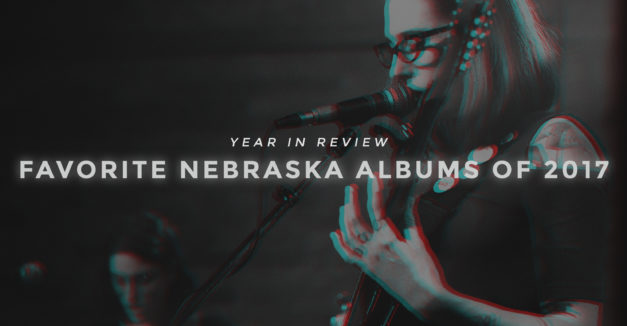 As is tradition at each year’s end, a horde of Nebraska music scene contributors told us about their favorites in local music, shows and developments while also looking ah`ead to 2018. So far, they have dug into the memorable live moments, single-serving tracks and compelling visuals.

Today is the day our group tackles the big one, their picks for album of the year. Below, they dig into LPs and EPs alike, highlighting a robust, diverse group of complete works pushing Nebraska music forward.

I think folks have been smart for independently releasing more EPs and singles. Mesonjixx’s In the Middle is such a tight, bright representation of what you can expect at a live show and the perfect bait to get me out to hear more than those four songs. The full-length stand out to me is Horse of Another World from See Through Dresses. It really showcases their dreamy sound, plus do you know a harder-working band?

Bien Fang’s Garbage Island is an EP that does the work of an album. Rachel’s and Kat’s insightful, razor-sharp songwriting makes me feel like I’ve been run over by a beautiful, shining feminist truck and I’m grateful for it. It’s clear that this is the work of musicians that know one another extremely well and respect and trust the hell out of one another’s artistic choices. It’s stunning.

The EP Garbage Island by Bien Fang caught my attention when it came out earlier this year. This grungy, garage-punk album has such a powerful sound that I love. It’s rich with great fuzzy guitar tones, soaring riffs and searing lyrics. I would love to hear more tunes from this talented trio in the future!

Without a doubt, Universe Contest’s Get Cot Livin. Just an incredible release from front to back. Also, the best lil babez to exist.

Negative Boogie by David Nance. It’s beautiful and fucked up and destructive and I love it. Seeing the band live is truly an experience.

Dave Nance probably steals that one for me with Negative Boogie. As far as full-lengths go, that’s probably the only one on its level out of Nebraska this year, but maybe I’m being flippant.

Otherwise, there have been plenty of great demos, EPs, tapes, etc. Thick Paint got some tracks recorded that sound great (not to mention Ameen’s Little Ripple release). Effluvium put out two tapes, the newer of which I’m absolutely obsessed with (but don’t own and I need to fix that). Bib haven’t put out Moshpit yet but the track they released is like hell on earth (my dream come true). My bandmate Tom Bartolomei also sort of half-released some of his solo stuff this year and his songs are extremely underrated.

John Freidel, John Freidel is a musical genius, a wizard really. If you haven’t listened to his work, you are missing out on one of the most prolific composers in this state, and probably beyond. Known most for his project Green Trees and the synthy sounds of the 2012 era of Universe Contest, Freidel’s work continues to leave my chin scraping the floor. Freidel released three albums this year. Three! A Rose in a Glass, Entrancer and Prey. Where the first album is more light and bubbly, the second, Entrancer, is the crossover album for me. Where you instantly go holy shit, he took it there. Dark, synthy, moody, heavy, haunting, you name it. It leaves you wanting to be dancing in a red dimly lit underground nightclub, where you’re blinded by the fog machine but could care less cause you are so caught up in the emotions of the music. You find yourself anxiously anticipating every corner each song turns, wondering what will come next, yet you already know, and that makes it all that much more of a repeat album. I honestly haven’t even gotten to through his third album of the year, Prey, as the 41 track full length has left be a bit intimidated, and I still can’t stop playing Entrancer.

My favorite Nebraska full-length had to be The Way Out’s Automatic Writing. I think this record was when the band really came into their own with a unique sound. The record had great moments scattered throughout, from the energetic title track, to the wistful “Conspiracy Theories”, to the genuinely heartbreaking “Things We Had As Kids But Lost Before High School”. The guitars are filled with punch and the rhythm section does a great job of keeping things moving and interesting, Mari Crisler’s bass parts are really fun. What I like the most about Automatic Writing, though would have to be that it sounds like a cohesive realization of a vision, which is incredible to see from such a young band.

Flawed by J. Crum. This man is dynamic, lyrical and exciting. All the things I want from hip hop. I think he also challenges the idea of what a rapper can look like. He’s a great role model in the community as well.

My favorite 2017 album was Khari: The Duo, Vol. 1. Zach and Ishma work really hard bringing positive hip-hop to Lincoln. I enjoy everything they do in Khari as well as what they do with AZP. They are both very talented individuals. I also really enjoyed Moshpit from BIB.

Moshpit by BIB came out Dec. 1 and although it was at the tail end of this year, holy crap, is it good. My personal fave from the album is “Freedom.” Those guys are all so talented and they just finished a hell of a run in Europe.

Probably not a Nebraska record, though Laura lived here for awhile and it is on Saddle Creek. The Mynabirds record Be Here Now is one of my favorite albums of the year. Laura found that spirit of Generals and brought it back in full force. It was one of the truly first political albums of the Trump era and still fun, full of hooks and can be listened to on repeat.

Horse of The Other World by See Through Dresses.

I really dug Sleep Sinatra’s The Empath album. It is a very vibey and melodic album. Adrian is passionate about the NE hip hop community and it shows. He is constantly supporting others, working hard and collaborating with people. Kamakauzzy, who is featured on the album, has really adds levels with his beats.

Evan Bartels, The Devil, God & Me. As for the why, here’s what I wrote about the album in September. “Bartels — a brilliant young songwriter in the mode of Jason Isbell and, to some measure, Steve Earle — and his four-piece band move through 11 songs that hover between country, rock and folk. That sonic combination is now designated as “Americana,” a label I’ve long loathed for its vagueness, inherent conservatism and, often, too pristine musical approach. For me, the Stoney Lonesomes are a country-influenced rock band – a la the Drive-By Truckers – and Bartels is a singer and songwriter who’s as good as anyone to ever come out of Lincoln.”

First off, let me say I have a sibling’s investment in this band, so my judgment may be a bit skewed, but my favorite Nebraska album of 2017 was The Way Out’s Automatic Writing. It’s a focused effort combining Mari Crisler’s observantly snarky reflecting with punk-tinged riffs, textured sonic building, and crisply produced hooks and climaxes courtesy of engineer Jeremy Wurst. On Automatic Writing, The Way Out stab and succeed with shots at long-form epics with multiple sections (“Conspiracy Theories”), polyrhythmic post-hardcore meditations (“Rolling Off the Edge”) and oddly timed guitar battling (“Spill Ur Guts”). But above everything, Automatic Writing is fun. Even the gloomiest of songs — like closer “Things We Had as Kids but Lost Before High School” — leave room for mosh-inducing walls of noise. There’s still plenty of room for the young band to grow, but, to me, Automatic Writing is the product of a band with skill beyond its years.

The Young Ones – The Young Ones 1. I met this kid named Ross Grieb who passed this record to me. From the moment I hit play I was hooked. This group really hit the nail on the head with writing and recording interesting songs. The album is very versatile and takes influence from what I believe is the future of pop music. Every song feels like a breath of fresh air. The lyrics hold a strong message that everyone can relate to. The production is lush and holds throughout the record. One song will be completely acoustic and the next 100% electronic but still holds the same style from start to finish. It’s very difficult to master that as a musician. These kids figured it out.

Todd Zach Jr. – Evoking Emotions. Todd has proven time and time again to impress me with his talent. His new EP had me dancing up and down the street on my way to work (I don’t own a car so I get plenty of time to groove). This body of work captures the essence of love and speaks about a man’s quest to convince his love that nothing in this world is more important than each other. To be honest, I don’t really hear that kind of honesty in music in modern records. I call it an “Old School Love” record. The song “Euphoria” is a tune I wish I experienced every day. The interlude “Inhibitions (Antoine Heard’s Interlude)” is a poem that I wish I could express to my main crush.