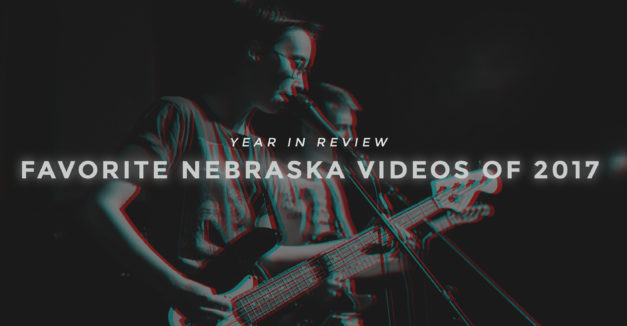 As is tradition at each year’s end, a horde of scene contributors told Hear Nebraska about their favorites in Nebraska music, shows and developments while also looking ahead to 2018. We rolled out the first one — their favorite Nebraska songs — yesterday.

Today’s list, favorite Nebraska videos, is a fun one, so we’re including it in the news section. Read on for the thrilling, whimsical and creative visuals that caught our contributors’ eyes in 2017.

Plack Blague came out with a song called “Just Another Man Of The Street.” Besides being an incredible song, the video goes above and beyond. There’s no stopping the Blauge train.

Mynabirds’ Tiny Desk Concert with Umoja Choir. It’s a video, there’s music, Laura lived in Nebraska for a while, and I cried, so.

My favorite music video is definitely Salt Creek’s “Phase.” The video is extremely well-shot, and I love the colors in the music video. It gives everything a somber look that fits with the song’s tone very well. The story was relatable too, as sometimes it’s difficult to break out of a  routine in day-to-day light. It’s just a great visual representations of the themes and tones of the song, and it’s fantastic.

“Phase” by Salt Creek is fantastic. Nolan’s acting was very fun to watch.

Salt Creek’s “Phase” music video moved me emotionally more than any other video I saw from a Nebraska artist in 2017, and Carter Knopik’s cinematography perfectly captures the song’s discontented mood. The video’s storyline shows the day-to-day monotony of a young professional doing the same things (grabbing coffee, sitting down at his desk, having a stack of papers set in front of him) every morning, a la (forgive this reference) that Spongebob Squarepants montage where Squidward moves to a new neighborhood and eventually gets bored of the daily biking, tap dancing and clarinet playing. Watching the “Phase” video, it’s hard not to get wrapped up in the ideas of wasted youth and short-sighted uncertainty. But if I’ve correctly interpreted the protagonist’s bizarre grin after he’s sprinted down a street and collapsed to his knees, those listless moments ought to be appreciated as meaningful experiences of growth.

“No Brakes” by Streetlight Sounds. Innovative as hell. This is the type of work that makes you look at what you have coming out lol. They played no games with this visual!

Dominque Morgan’s “Shine.” Dom puts so much into his art, and this video is another extension of that. So much positivity and we need a lot of that right now. It’s uplifting and hits the mark.

“Cops” by The Way Out is crisp, engaging, and has a great sense of humor.

“Cops” from The Way Out. Man, I love that band. They work harder than a lot of people I know and it shows. The over saturated colors and flashing graphics really brought life to the already kick-ass song. They’re on a hiatus right now, but I can’t wait to see them make a great come back next year!

Conny Franko, “Love Your Life.” I have to admit, I am a biased on this selection because I am Conny’s DJ … BUT you HAVE to watch the video. It captures the perfect breakup scene. Ever dated someone who threw your dog out the window? Damn … that’s rough.

Now I know why Tom doesn’t want to make a Hussies video. I don’t even watch videos, do I?

Thank goodness the weekend is here. Before the internet

Ryan Human, The Young Ones, Jonathan Leach at Vega – Lincoln songwriter Ryan Human celebrates the release of his debut album Piano Room tonight in the Railyard venue. The four-song EP introduces us to Ryan Hruska’s positive ruminations and light-hearted piano playing. The Young Ones and Jonathan Leach open in support. 8 p.m. show, 18-plus, $7, RSVP here.

The Nebraska Funk & Soul Alliance – The downtown Lincoln music event returns for a second year, bringing together more than 30 bands, DJs and performers in five venues with the purpose of raising money for charity. Eight Lincoln and Omaha community organizations will benefit. KHARI the Duo and AZP vocalist Ishma Valenti came on Hear Nebraska FM this past Monday to talk about the event’s mission, shout out some of the bands and give the scoop on his new musical project; listen below. Music starts at 6 p.m. $20 minimum donation. Find a list of the benefitting organizations and RSVP here.

Will Hutchinson, Mike Semrad, Jack Hotel at Barley Street Tavern – Three Lincoln folk songwriters make their way to Omaha’s Benson neighborhood tomorrow night. There will be new music, as Hutchinson has a new album, Wildflower People, out now, while Semrad has noted the release date of his own Cloud Or Mountain this January. 9 p.m. show, $5, 21-plus, RSVP here.

Nebraska Music Academy at The Bourbon – The educational music program celebrates the accomplishments of its young students with a showcase in The Bourbon’s main room this Sunday. The Nebraska Music Academy surfaced in the wake of Academy of Rock, and continues its mission to provide youth opportunity to learn music through mentorship and instruction; learn more here and watch our feature video below. Performing acts include Rock Apocalypse, Ducktape & Donuts, Typical Chaos, Lightless Daze, Major Minors, Big Red Rejects, 9-5ers, Borderline Edward, Spotless Minds and Runnin’ on Fumes. 1 p.m., all-ages show. RSVP here.